Welcome to this week's blog, the final blog from a European race for 2011, which feels very strange indeed.

I can scarcely believe I'm writing that; where is my life disappearing to?

Firstly, let me apologise for the lack of a blog after the Belgian Grand Prix.

The only holiday I've managed to grab this season was the week after Spa and I would have been in serious trouble with Harriet, my wife, if I'd spent the first of our five days away writing a blog.

You see, for the grands prix that are referred to as 'fly-away' - the long-haul races outside Europe, that is - the circuits provide the hospitality suites for the teams and the production offices for the television stations.

It is essentially to cut down on costs so the huge team 'paddock palaces' aren't transported the other side of the world.

But at the European races, we take a truck, which we occupy from the first European race in Spain to the last one in Monza.

It's a dressing room, edit suite, production offices and kitchen all rolled into one. It has even been known to accommodate the odd overnight stay if someone's working particularly hard and late in Monaco and can't face the drive back to our hotel on the way to Nice.

But now our European adventure is at an end for another year and so it was with a heavy heart on Sunday evening that we waved off Pete D'Lemos and the trusty silver truck he looks after; we'll see him next in Spain in eight months.

It feels like two minutes since I walked into that truck for the very first time in 2009. It was the same one ITV had been using, but their presenter Steve Rider's office had been turned into an edit suite so I couldn't quite say I was walking in his shoes.

Talking of getting his job, remarkably it is three years ago this week that the then BBC head of F1 Niall Sloane offered me the chance to be the presenter, and what a learning curve it has been.

I can still remember the fear and apprehension as I walked into the F1 paddock in Australia for the first time, and the nerves as I started listening to 'The Chain' down my earpiece, hoping the words would come out in the right order.

The good news is that doing this job never becomes 'normal' or mundane and I still cherish every moment.

For that reason, I asked someone to follow me with a camera this weekend as in years to come I'll fondly look back on what it was like to share the pit lane with Eddie Jordan and David Coulthard as a 30-something guy, lucky enough to see the world and follow the sport I love. 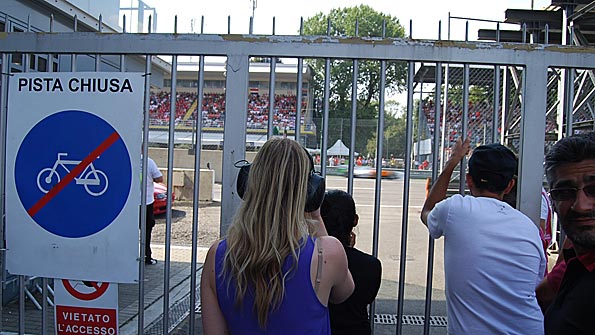 I've posted a selection of pictures with this blog. Have a look through and see what you think. The one I'm most proud of is the one directly above - and it doesn't actually feature much apart from a big silver gate!

You see, one of the oddities of this job is that I very rarely see a car actually on the track.

We must be out of the pit lane with 15 minutes to go before qualifying and the race and so by the time the cars are track I'm in the paddock and there is nothing to see. 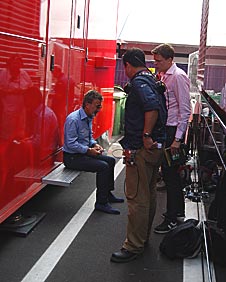 An hour before we go on air and Eddie Jordan, Ted Kravitz and I have to cram ourselves between Ferrari and McLaren's motorhomes to get our gear on for the show

One of the most common requests I get is from people who have tickets to the race asking to get into the paddock. I tell them they would soon be bored of sitting around drinking coffee and would see more in the grandstand.

Anyway, in Monza on Sunday, I walked out of the paddock and along the back of the garages and the photo is testament to how tricky it is even for me to get to the track during the action - I always say that in front of the TV you get the best seat in the house and this is proof!

And why am I so proud of the photo? Well, Paul di Resta's Force India is passing by me at full speed and somehow I managed to press the button at just the right time - trust me, it was far more luck than judgement.

Talking of luck, some people may well think that Red Bull's Sebastian Vettel has had his fair share of it over the course of the year, but perhaps in Monza he finally put the doubters to bed by doing something a few were questioning - pulling off a cracking overtake!

Vettel knew he had to get past Fernando Alonso's Ferrari for his race strategy to work, he managed it really early on, then delivered the lap times and the consistency to take another win.

I think that perhaps it was the race that finally broke his challengers and since then we've seen a few of Seb's rivals declare that he has now won the title.

Spa and Monza were the races where McLaren and Ferrari were expecting to challenge Red Bull, but Vettel won both. As for Seb's team-mate, Mark Webber, well, he only managed to collect 18 points to Vettel's 50.

So, with that in mind we had a meeting back at BBC HQ on Wednesday to discuss how we tackle the Singapore race weekend.

Our mantra is 'fail to prepare, prepare to fail'. With that in mind, we need to fly into Singapore fully ready to do justice to Vettel if he manages to win the title there.

I always enjoy Singapore. And if you want to read about how strange it is for us as a production team, as we stay on European time, which is eight hours behind where we are, my blog from 2009 will tell you about the perils of trying to get dinner when the city is asleep.

Before I sign off, I'm sure that there will be plenty of people reading this who are keen to know about our plans for the 2012 F1 coverage.

As soon as there is something concrete to announce, I know that the BBC will do that. However, I can tell you I am committed to helping the BBC make its F1 coverage next year as compelling as it has been for the last three years.

And thanks for your continued loyalty - all 5.8m of you who watched the race with us on Sunday. 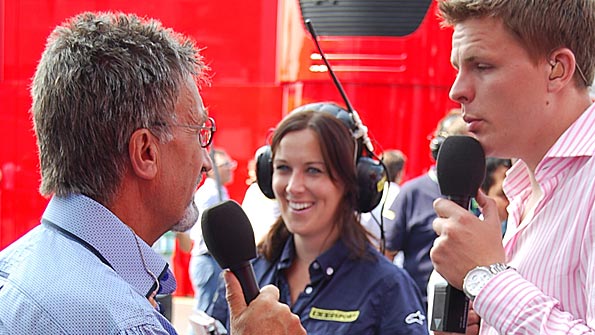 Lee McKenzie looks on as EJ and I check comms. It involves talking to each other while the team in the gallery talk at the same time to make sure the sound levels are workable 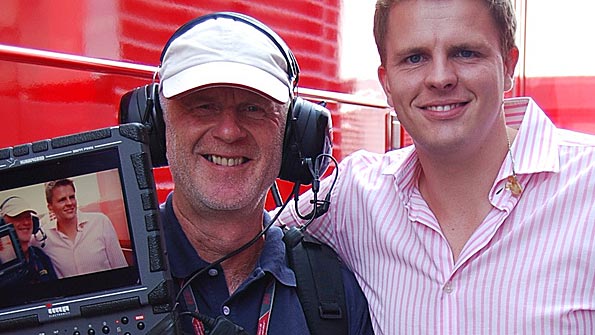 Roger Bines, our rigger, is our unsung hero. We wouldn't be on air without him and I've spent the past three years with him in the pit lane. He retired after 15 years in F1 on Sunday. We'll miss you, Rog! 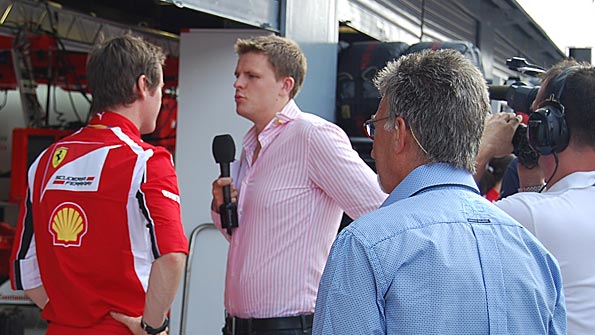 Two minutes to on-air and Rob Smedley, Felipe Massa's race engineer, pops over to say hello and have a chat. 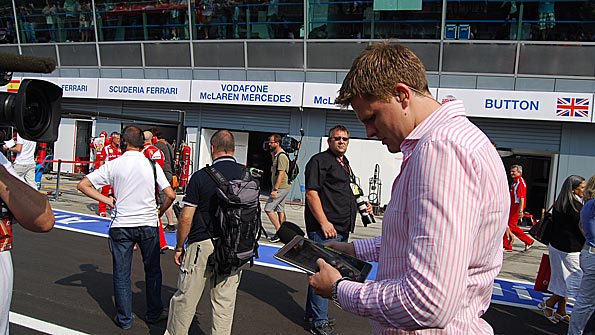 Post-race and I am busy noting down the race finishing order, the championship standings and any other notes I need close at hand for 45 minutes of unscripted, unplanned post-race analysis 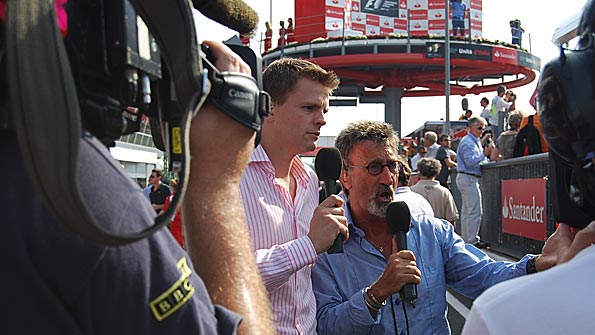 I love this snap.. Eddie Jordan doing what he does best... having an opinion! 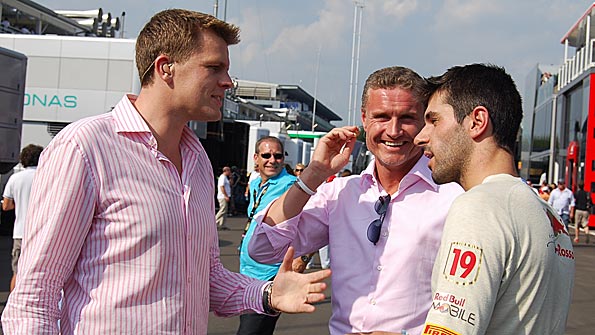 Whil you at home are watching the top three drivers' interviews, we decamp to the paddock, where Toro Rosso's Jaime Algersuari pops over to see what we thought of his charge into the points 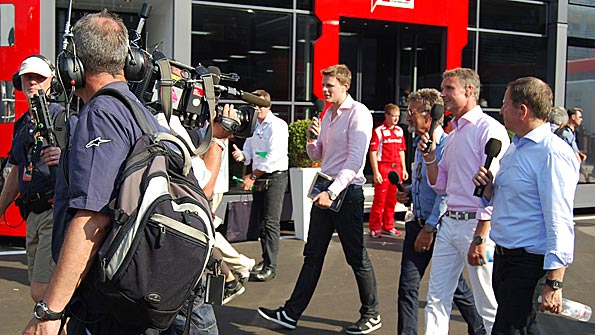 This photo sums up the job for me, and I love it. The team, all four of us, owning the paddock as we go looking for stories. On screen it just seems to flow 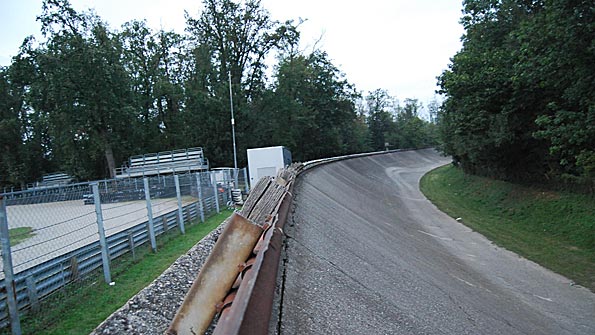 The last photo I took on my way out of the circuit. The Monza banking is a reminder of how much has gone before us, and that F1 will continue to evolve long after we've left