Great destination, shame about the race

It's almost 8pm here in Valencia and I've clearly bored Ted Kravitz because he has just made his excuses and sloped off to find some food!

I'm sitting by gate B6 about to board our flight home to London Gatwick and thought it was the perfect opportunity to get my blog done.

The airline we're flying with aren't famous for their generous cabin space, and with my daddy long-leg like arms, I think it's best to get this written now.

There are drivers, team bosses, designers, mechanics and engineers sitting in the very brightly coloured 'Medos' cafe in front of me trying to get some energy back into their systems with a beer and a sandwich.

Mind you, despite working away in the searing heat all day there are a variety of laptops already open as the teams continue to analyse the data from the race. Ah yes, that brings me onto the race.

There are many things to love about Valencia. I received plenty of Twitter abuse for mentioning the Tinglados once or twice.

I was just fascinated that many years ago, people built those warehouses to do a job as unglamorous as sell fish and here we are turning them into the hub of a race that is all about the most up-to-date technology.

I also love that Formula 1 visits a beach city, which means you can grab a short holiday, have a dip in the sea, eat some great food and then watch a bit of F1.

Oh, hang on, 'Mikey Muscles', Jenson's full-time personal trainer who we bumped into during my grid walk with Eddie, has just joined me at the gate with his tail between his legs.

He will dictate the next paragraph. In his words here's why he blanked me as I was bigging him up on the grid pre-race.

'In one short sentence, it's not about me *giggles*, so I'm told. Jake was very kindly about to introduce me to the world at which point my driver had already disappeared, so I had to follow him like a sheep. It was 13 minutes before the race start and he needs to be in the cockpit 10 minutes before - so time for small-talk was at a premium. I thank Jake for his consideration and maybe we can have a moment sometime soon'.

I assume by 'moment' he is referring to me grabbing him on the grid at a future race. He will be lucky! Only joking, he's a great guy and is obviously there to do a job despite me wanting to make him famous.

By the way, if I seem distracted while writing this, it's because a guy to my right is making a bad attempt at taking my photo without me noticing.

Anyway, back to the race. After I'd been blanked on the grid, it was down to business and a chance for Valencia to live up to the incredible drama that Canada provided. To be honest, that was a tall order for any circuit. 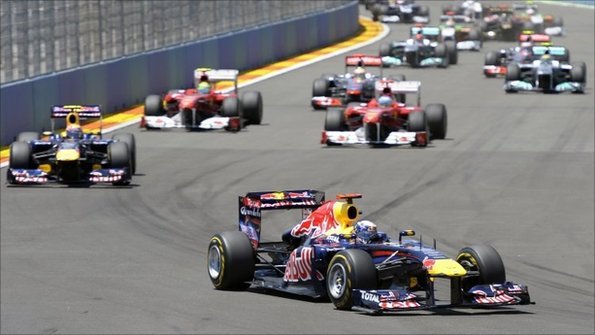 Perhaps it could be a new BBC show with Andrew Lloyd Webber - 'How to solve a problem like Valencia' - but I think even 'The Lord' would struggle with this one.

You could argue that every race this year has been a spectacle, perhaps even that the season opener in Australia, which is usually a cracker, had been the least exciting race. That is until now.

I think we've now readily accepted the DRS overtaking aid, Kers power-boost system and marginal tyres as integral to the excitement in modern F1. But here in Valencia, even though they gave us more overtakes than the single pass we saw in 2009, it still lacked spark on track and something to get genuinely excited about.

I enjoyed the Fernando Alonso, Lewis Hamilton, Mark Webber battle behind Sebastian Vettel, I enjoyed Sergio Perez's valiant attempt to pick up points by just doing a single stop and it was also interesting to watch Paul Di Resta drop in and out of the points all afternoon - but I still wasn't on the edge of my seat.

There is no doubt that we as F1 fans have been well and truly spoiled this season with the action that has been thrown up, particularly after Canada, and during any other season this would have seemed like a relatively exciting afternoon.

I wonder if Valencia has a future. It's certainly a packed calendar next year and two Spanish races may be overkill.

In any case I still had a blast on air. I have never driven an F1 car so therefore I think going live is one of the most exciting things a man can do - but it does have its challenges.

For example, I was in Jenson's garage just seconds before we went live on Saturday and suddenly Lewis' engine roared into life.

As I was actually in the garage, you wouldn't have been able to hear a thing, so with about five seconds to go until BBC One viewers were welcomed to Spain, we had to get myself, two pundits, two cameras and three other people to the far side of the pitlane in an instant - and still look calm and collected when Richard the director shouted 'cue'. And boy does he shout!

'RUN VT' is the kind of thing Richard barks at the top of his voice, which is ironic when you think he joined us late on Friday due to directing in the serene environment of Wimbledon. He returns to SW19 on Monday morning, and I hope he is a little quieter there or he might scupper Andy Murray's chances with an untimely, overexcited outburst!

So, as I sit here with my jeans stuck to my legs, a slightly red neck, and with the good and bad bits of the show running through my head, I can also look ahead to a really exciting few weeks for British motorsport.

It's Goodwood this coming weekend and I'll be there, followed by the British Grand Prix, which is always my favourite race weekend of the year.

However, it's also National Motorsport Week which means you can get through the doors of your local F1 team or just find ways to get involved in motor racing - and you don't need to be a millionaire! Just check out www.gomotorsport.net.

Anyway, the last word on this week's blog goes to Robert Burnett. He and his Dad just introduced themselves to me in the airport. Robert had just been brought to his first ever Grand Prix and he was wearing a Ferrari top but claimed to love Lewis Hamilton!?

Whatever the case, he's only five-years-old so it's good to see a new generation of fans watching the sport and that's what National Motorsport week is all about - inspiring the next generation.

Here's hoping for an inspiring race in two weeks' time as well, perhaps we could release a charity single- 'F1's coming home!'