Starting the season in style

Can I start by saying how great it feels to have F1 back on the BBC, and in HD glory?

I loved the tweets telling me about all the F1 parties going on around the UK and, even though many of you had to do some serious coffee drinking to cope with early morning action, #bbcf1 was trending on Twitter the whole weekend, which was awesome.

Mind you, it's funny how life can conspire against you sometimes isn't it? Having waited all winter, and an extra couple of weeks, I wanted to have the perfect preparation ahead of the opening race weekend of the 2011 F1 season. But it didn't quite work out like that.

Now, I'm an eight-hours-a-night man at the best of times, so having spent the day grabbing the latest info in the paddock and then grabbing a late dinner, I was already worried about finally getting to bed at midnight ahead of Saturday's first qualifying session of the year.

However, an hour or so later and my night was set to get worse. A lot worse. 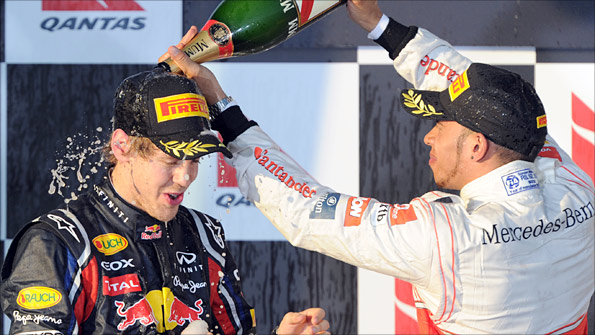 You know those horrible, startled wake-up calls that you get sometimes when you spend the first 20 seconds just trying to remember where you are? That was me, staring into the darkness trying to work out what the sound of rushing water was in my hotel room at 2am. Moments later I was flying across the room in panic as out of the ceiling, on to the laptop, all over the desk... a water leak!

Thankfully, I managed to rescue the computer and, after moving rooms, eventually got my head down - welcome to the new season, Jake!

It felt really strange starting the season off in Australia again, actually.

The last time I welcomed you guys to the BBC's coverage of the opening race there, it was 2009 and I was in a serious state of panic. I'll never forget standing in the pit lane in Melbourne and hearing 'The Chain' for the first time. I'd never stood under the winner's podium, interviewed a driver, or even done live TV with Eddie Jordan and David Coulthard before. It's amazing how quickly you can get used to something isn't it?

Mind you, after a break of a few months it always feel a little bit like it's the first time you're popping in your earpieces and hearing the seconds count down until we're on air.

Like anything that involves a group of people working together, you get a great flow going when you do something regularly, and equally after a big break you can feel pretty rusty. I'll certainly admit to feeling like a badly oiled bike this weekend.

Before each show we always get together in the production office to discuss what's on the programme and watch the taped elements of the show. I also talk with Steve Aldous the assistant editor about where we want to be. We try to inform the teams so we don't surprise them by suddenly appearing inside their garage live on air and then we take to the pit lane - all seven of us!

With Steve, a sound man, monitor man, a couple of cameras, me, and two pundits we can be quite a big group to negotiate what is at times a really rather claustrophobic pit lane.

Australia was particularly busy, with my random moment of the weekend being former Westlife member Brian McFadden having a beer with Beppe Di Marco from EastEnders while Leo Sayer and Danny Cipriani wandered past...That's F1 for you!

One element I really did enjoy was the F1 Forum and if you're in the UK and you've yet to see it I'd suggest you take a look on the iPlayer. We had the Sauber drivers, Paul di Resta, Sebastian Vettel, and DC getting cake in his face - so pretty much something for everyone.

So, what did you make of the first race of the year?

I feel really sorry for the Sauber pair of Kamui Kobayashi and Sergio Perez after their cars were ruled illegal. Perez in particular did an awesome job, just one pit stop, great speed and points on his debut that have now been taken away from him.

If you check out the F1 Forum it's interesting to see the surprise on Kobayashi's face when talking about Perez. If there is one thing an F1 driver likes less than a slow car it's a fast team-mate!

We'd actually made it away from the track when the Sauber news broke and we were heading out for dinner. A quick U-turn in the car, though, and it was back to the track for a late-night piece to camera. It happens every season!

One rookie was certainly not left frustrated. It was great to speak to Di Resta live ahead of qualifying. We always ask for drivers to join us live before the action gets going on a Saturday and they frustratingly rarely say yes.

But Paul was happy to chat and I think he did a great job. He was pretty candid in saying that he thought his car could struggle to make it into the top 17 in qualifying, so to finish with points after the stewards had punished Sauber was great news for him. He did, however, let his team-mate through twice so we'll have to watch that situation carefully.

Despite all that was going on, it was all about one performance this weekend, wasn't it? Vettel's dominance was incredible. No Kers power-boost system but the best start on the grid, masses of speed over a team-mate who he really does have the beating of currently. And most pleasing of all? He's still such a normal guy!

There are a few drivers in F1 that I have interviewed numerous times now yet they still wouldn't give me the time of day. They'd walk past me in the paddock, probably not even know my name. They're so intense that whatever you do you just can't get close to them.

He took the time out to congratulate DC on his 40th birthday having just started his title defence in style, not scurrying off for a massage and avoiding the media at all costs. Relaxed, approachable, honest and stunningly fast, I think it tells us so much about him that he can put in such amazing performances and enjoy it at the same time. He will go on to be an even bigger star if he can marry up such personality with such speed for seasons to come.

So, we head to Malaysia with Red Bull looking like they're around a second quicker than the rest with a super-confident driver very much playing a game of 'catch us if you can'.

The best news of all, though, is you'll only need an 0800 alarm to enjoy the action on race day, so I hope I'll see you then.