No shortage of drama in Japan

I'm writing this blog while rumbling along the road between Suzuka and Osaka.

This current trip seems to be going on forever. From Singapore to Japan - and now we're going to Abu Dhabi via China to film Martin Brundle and David Coulthard zipping around the new Yas Marina circuit in a two-seater F1 car.

I know that sounds glamorous - and believe me, I feel incredibly lucky to be on this bus - but after a slight miscalculation I've kind of run out of pants.

There are two possible explanations for this.

Either my wife, Harriet, miscounted when helping me pack - she always grabs my pants and socks and uses them to fill my shoes as it apparently 'saves space and keeps your shoes nice for the television' - or I've done my usual trick of managing to leave my personal belongings strewn across half the globe. 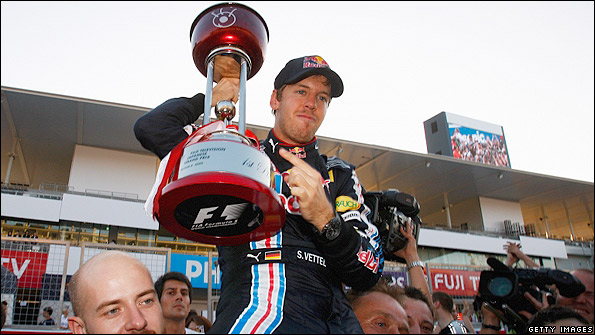 I'm notorious for losing things. Sometimes it's bad luck, such as when we flew into Singapore last week and I lost my mobile down the side of the seat. I used my passport to help prise it to within a grab-able reach and then dropped that too!

I moved the seat from the sitting position to the reclined position, got on my hands and knees, tried to fashion a plastic spoon into a tool... no use.

Eventually, I sheepishly informed the stewardess who told me 'under no circumstances move the seat' and I told her I absolutely hadn't!

As it was now in the slightly reclined position I had to sit on a crew member's jump-seat for landing and then an engineer and the flight crew dismantled the chair whilst I looked on, flushed with embarrassment.

I got the phone and passport back and left them with the remains of the seat - it was like the time Alan Partridge managed to dismantle a trouser press.

Sometimes my absent mindedness can actually cause quite a lot of trouble.

At the Beijing Olympics I put a poster up in the make-up room so any guests or dignitaries could sign it - the plan was to take it home and put it up in my study.

From Chris Hoy to Gordon Brown, it got covered in ink over the 10 days we were on-air and I proudly carried my poster to the airport for fear of it being crushed in my suitcase.

Just as they called the flight I realised I didn't have it.

I retraced my steps and eventually I had the sickening, dawning realisation that as I'd come through customs I leant it against the table to sign my departure papers. I quickly nipped back to the immigration check point and looked through the barriers.

Sure enough, 20 yards away, there was my unattended poster.

I was so keen not to lose it I quickly dashed out, grabbed it and tried to nip back 'airside'.

Well, here the drama began because they wanted to see my passport again, and according to that I'd been 'stamped' out of China and wasn't technically even in the country.

Much flashing of my BBC card and Olympic accreditation later and I made the flight, poster in hand, with moments to spare. The poster remains rolled up in the loft!

So, Harriet, if you're reading this before I get a chance to call home, perhaps a quick trip to M&S is how we'll celebrate my arrival home, regardless of what Paxman thinks!

I remember on the red button F1 Forum, which you can still see online, I said "15 gone, just two races left" and I could barely believe it myself.

I was shooting the breeze with Marty Brundle on the bus before he dropped off to sleep and he was telling me that in F1 it's the norm for life to just flash past. I think it's the counting down the year in two-week blocks that really speeds things up.

If you do watch the Forum, you can spot the moment that Jenson Button was chilling out behind me and then suddenly got all shy when we started talking about him.

He was in great form all weekend but what do you think about his Championship chances now?

Was another weekend of damage limitation enough or do you think the pressure will be suffocating for the final two races, with Seb and Rubens refusing to go away?

JB, with his Japanese/Argentine girlfriend Jessica, loves it here and I'm actually sad to leave Japan. It's so unique and individual that it's felt like a real breath of fresh air. 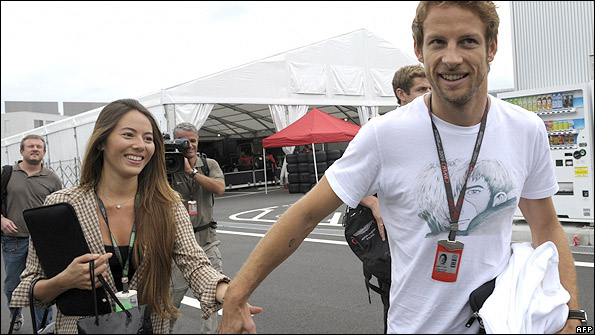 Jenson Button with his girlfriend at Suzuka

There can be few places left on earth where the English language is still so widely unspoken and not understood.

I like the Japanese nation's attitude - why should they learn our native tongue, and anyway, it's amazing how far you can both get with mutual noises, signs and laughter.

By comparison, for all its cleanliness and modernity, Singapore felt like Europe in Asia.

One of the most unusual aspects about this island have been the toilets.

I was telling Chris Moyles on Friday morning that they have 'super toilets' out here.

The lid lifts and seat warms when you enter the bathroom. It makes waterfall noises to avoid more embarrassing sounds emanating from the room and it also has two little jets to have a little wash if you so wish... which is apparently quite addictive and as I had lots of work to do I decided not to chance it... even once.

By the way, Martin Brundle seems in a good mood considering it's such an early hour.

He asked "are we there yet" after about two minutes, and just said "it's quite exciting being on a bus!". I'm more excited by my beverage.

They love vending machines over here, it seems.

We've just bought some coffees for the journey and instead of waiting for a 16-year-old 'Barista in training' to froth the milk, I just put a few yen in a slot - and out came a coffee. OK, it is in a can, but it's hot, tasty and convenient.

It was only after I snapped a pic of the can to show you what I'm drinking that I realised that perhaps DC needed one too. That's what you get for indulging in too much karaoke! 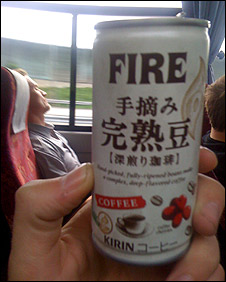 It was quite a dramatic and testing weekend for a number of reasons.

I realise that it was rather demanding for all you F1 fans too, and after looking at the viewing figures I am genuinely delighted that millions of you braved the pain of a 5.00am alarm call on Saturday and Sunday to see the build-up and action live.

I hope it was worth it just for EJ's question to Ross Brawn pre-race.

If you missed it, David and I were quizzing Ross on the emotion of the Constructors' World Championship being within reach and he was sharing just how nervous he was feeling when Eddie piped up with a question that he prefaced by saying "coming at this from my own little way" and then challenged Ross to a karaoke performance should they clinch the title.

Ross sidestepped it well, and in the event his vocal chords can relax until Brazil!

Eddie was in good form this weekend, demonstrating his unique take on fashion once again. What do you think of the shoes? 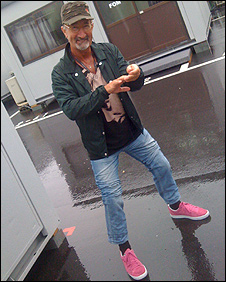 So, no titles decided this weekend, but there was no shortage of drama during both days.

I have been excited about Suzuka since the very start of the season because it's heyday is right in the middle of my defining time as a Formula One fan.

From Piquet winning the title to Prost and Senna's coming togethers and Damon Hill's emotional title win in 1996 that didn't just leave a lump in Murray's throat - as an impressionable teenager, Suzuka was the business as far as I'm concerned.

Lewis Hamilton clearly agrees, he drove an F1 car here for the first time last weekend and said it was the best circuit he's ever driven.

I took a wander around on Friday evening and I can't agree more. Suzuka may be brilliant, but as we saw, particularly on Saturday, it demands respect.

The accident packed qualifying session was quite difficult for us, not just because the stop-start session meant we had to react quickly to what was going on, and tread on BBC Breakfast's toes by staying on air longer, but post-qualifying was where the pressure really arrived.

Due to the numerous penalties handed out by the stewards it seemed the grid was changing before our very eyes.

The problem was that almost every team had a different potential grid because of different implications of how the penalties would affect things.

Now, usually that's cool for us, we're off air so we can sit back, see how it all pans out and clear it up the following morning... but not when there is a re-run being transmitted that afternoon.

So, after much scratching of heads, with Mark Wilkin the boss stalking the paddock looking for concrete news, and trying our best to resolve the re-arranged grid we were finally able to record the end of the BBC 1 re-run programme at about 10.00pm... we then were able to turn our attention to the following day's script and running order... but not before grabbing some late-night grub with Lee McKenzie in the media food-tent. 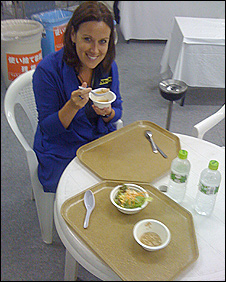 So, if the first 15 have flown by, you can bet the final two races will come and go in the blink of an eye.

And isn't it just set up perfectly for Brazil to provide all the answers for the second season in a row.

As long as I take some 'contingency pants and socks' I think we'll be just fine.

PS - Since my last blog we've two new arrivals to the BBC F1 team after both Sunil and Andrew Benson had new babies within a couple of days of each other... congratulations!