My photo diary from the European Grand Prix

This was my home for the Valencia GP. I took this photo at 6.30am on race day after I'd packed my bags. We were lucky as, at times, the journey to the track can be long. But we were just minutes from the harbour this weekend, which was cool. It might not look particularly glamorous, but the room becomes my home for the weekend as I squirrel myself away each evening to get my script written and research done... 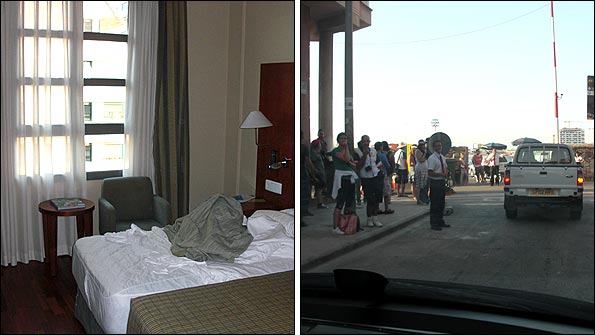 It was then off to the track, past the fans gathering outside waiting for drivers to sign autographs...

...and we ended up parking near to Jenson's personal parking spot. I know he's driving for a new team - but you'd think, 10 races into the season, the organisers would have got the leading teams name right! 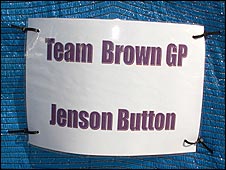 Team BBC make their way towards the broadcasters area: the long shadows show you it was pretty early. We are usually at the track around 8am on race day...and we need to be. The mornings just fly by.

During a race weekend we try and get around the track if we can. It really helps myself and commentator Jonathan Legard - Ledgie - do a better job, particularly me, as I've never been to the circuits before. I'm always amazed by how the tracks are so much more extreme than they look on TV. They are often tighter, steeper and more dramatic than you'd expect...not great when we decide to run them! Do you like the caps? We were lent them as the sun was so punishing... I felt like I should have been a driver on the podium! 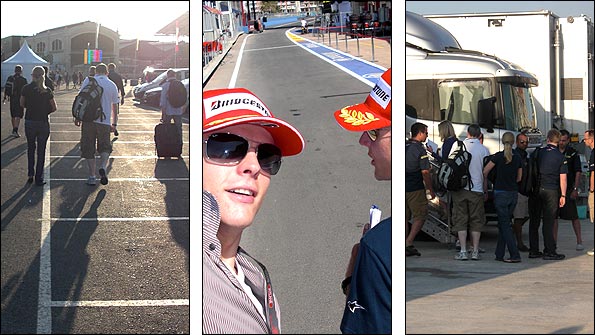 Here's the team gathering outside our production office before starting work. I'm not sure why they aren't heading up the steps... perhaps they're not too keen to get working!! This is actually a portable office and Pete drives it for us, sets it up and stocks it up with good food for lunch over a race weekend. Pete's an important guy.

Richard is the director for our coverage. I think at this point he was making his way up the stairs and back into the office while I was telling him we were all off to the gallery to watch the VT parts of the show with all the on-air team.

You see the two clocks on the wall here in the gallery. One was at local time (at 11.20), the other telling us UK time. It's important for me to watch the VTs so I can make sure my introductions are correct and work out what to say off the back of them. This room is where the producer, director, PA and the rest of the team spend the weekend talking down my ear. If you haven't listened to my race weekend talkback then click here. 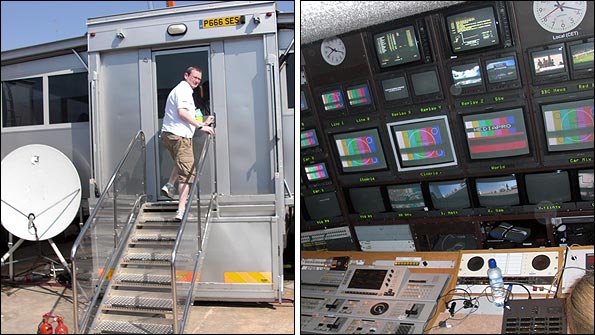 By midday we're usually in the paddock getting our gear on. It's at this point that the adrenaline starts to pump. The viewing figures this year are the highest for 10 years and when you know that five or six million people will be watching it can be really daunting... Mind you, I can always rely on EJ to remind me not to take things too seriously!

Once we've done the pre-race show we head to one of the teams motorhomes to watch the race. This is such an interesting time for me. To be with David and Eddie as we discuss the goings on teaches me a huge amount about racing. 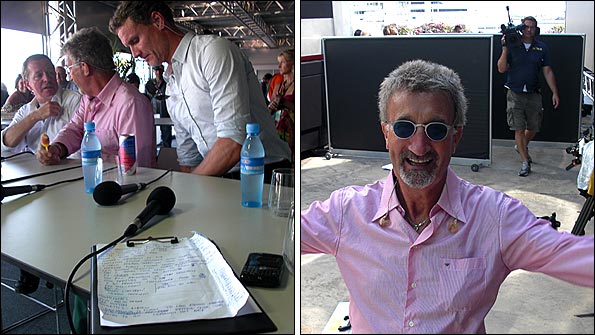 Then, once the race is over, hopefully you are one of the one million people that decides to press red and joins us for the F1 Forum. You can see my race notes and PDA receiving your emails whilst DC checks his phone and Mart and Eddie catch up.

Post race, we usually get out of the circuit and head home as soon as possible... but not this weekend. A late flight meant we could all enjoy the English guys winning the Ashes. At this point I usually chat to the bosses about how the show went. Remember I haven't seen them for about five hours. 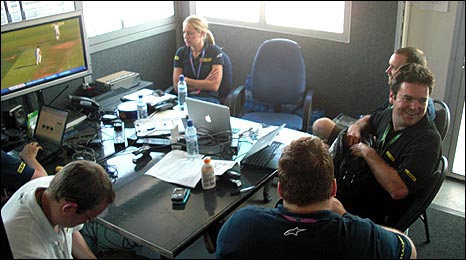 It always amazes me how quickly things move on in life. On Sunday Rubens [Barrichello] is racing towards glory, a few days later the circuit is empty and returns to being a normal road. The same on the TV side. After lots of set-up and prep, it's a case of clearing up as quickly as possibly. Particularly this weekend, as the same stuff will be waiting for us when we arrive in Spa for the Belgian Grand Prix in a few days time. 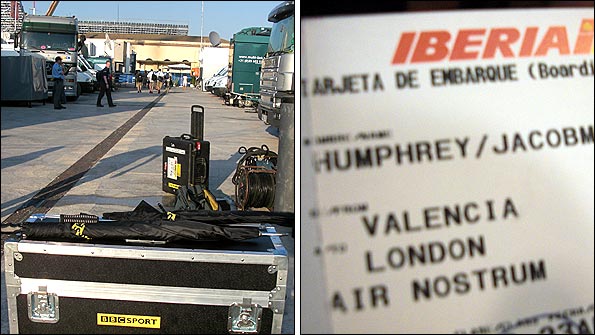 So, team BBC gather at the airport. Sunil, in the front of shot, has a rolled up Jenson Button poster that he got signed for a friend, Ledgie is in the background talking to a McLaren employee... perhaps about their pitstop incident! 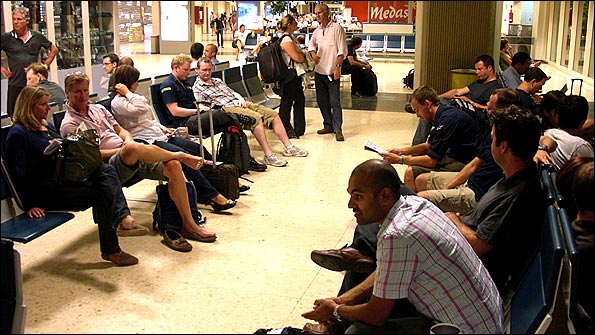 Finally it's time to board the plane - and I have a chat with the man who masterminded the race win. Amazingly, Ross Brawn was talking to us about cricket. He even actually texted this very site after the race to wish Straussy and the guys all the best! 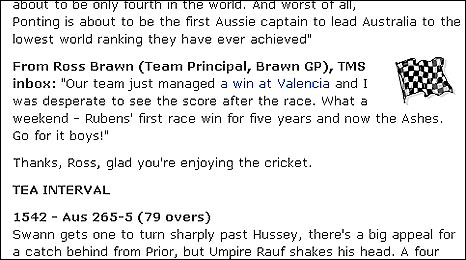 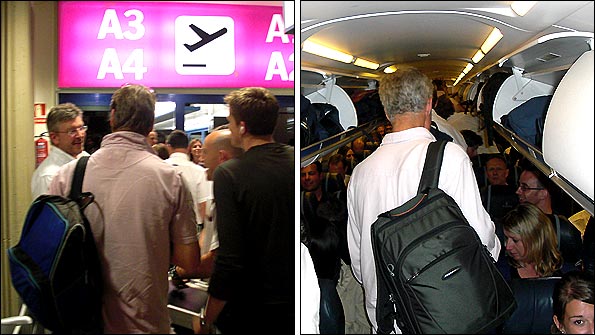 Here is Jock Clear, race engineer for Rubens with some very special cargo indeed... the trophy for winning. 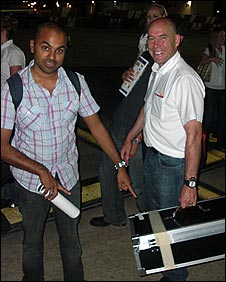 Mind you, I'm surprised he managed to fit it into the plane. It was quite a tight fit, but I'm not surprised they didn't want the trophy in the hold.

We eventually landed at Luton and I quietly opened the front door before getting into bed next to my wife at about 1.30am on Monday morning. Race day is a long day, but a rewarding one. And I can't wait to do it all over again this weekend at Spa...see you then.