Messing about on the river

So, here goes, attempt two for this particular blog post. There can't be many things more annoying in life than leaving your computer for a few minutes to find that when you return, everything you've been working on for about an hour has disappeared!

Anyway, how are you all? How have you coped since we left Silverstone almost three weeks ago? It feels pretty strange, doesn't it? This season has been all about ridiculous headlines, amazing sporting achievements, stacks of surprises that have made even F1 veterans raise their hairy grey eyebrows and then... nothing.

I remember before this year began I was never a fan of a lull in the middle of an F1 season and now that it has basically become my life I am enjoying this break even less.

I have been climbing the walls at home in between trawling F1 websites for the latest news (about every 30 seconds!), and I've even resorted to watching my season review of 2005 that I've seen about 10 times already. One positive is that after moving house it took me two weeks to find my passport so I'm glad of the break in that respect.

Mind you, as much as I'm missing the racing, I think it's everything else that goes with it that I've been struggling to replace, for example, the camaraderie as the entire BBC F1 production team descend on Heathrow and file onto a plane where Mark the boss is guaranteed to be asleep in about three seconds.

Then there's the competition that seems to be about seeing who can create the most monstrous sandwich in the production office kitchen. Katherine the PA even asked me in Spain if I've ever been fat! I've un-supersized my lunch since then.

Or there's just hanging out with Eddie and DC, listening to their stories and sharing the racing weekend with them - I really enjoy their company.

Since Silverstone, I have been asked two questions more than any other.

Question 1. Do EJ and DC actually like each other?

The answer is a resounding yes. They don't just like each other, they've got great respect for each other's achievements in the sport. I believe as TV pundits they have actually raised the bar. I can think of numerous sports programmes where the pundits wouldn't even challenge the viewer let alone each other. I love that there is a bit of spark between the guys. Lots of people ask me if I find it hard having to mediate between them.

The only hard thing is that their little bit of needle makes really compelling viewing and I end up being a viewer just like you. Sometimes I have to stop watching them and remind myself we're live in front of five million people and perhaps I should stop the bickering!

Question 2. How have you filled your bit of time off?

Well, I'd love to say I haven't worked since we were in the paddock in Silverstone being joined by the great and good of Formula 1 (great weekend eh?) but the truth is that I've had a bit of work to be getting on with but also some time to have a bit of fun.

I remember when Steve Rider took me out for dinner after I'd got the F1 job. He told me that the first month was tough and you'd need all the rest you can get. Well, the first month is a haze of first-show nerves, a little relief and lots of work all wrapped up in a blanket of jet lag. Melbourne feels like a millennium ago. That opening set of long-hauls were followed by a month that included the madness of Monaco and Silverstone, so to get an extra week at home was a real treat and in true Jake style it's been relatively random!

One evening I found myself in Wembley Stadium along with thousands of other people to watch Take That. No, I didn't have a day off school when Robbie left the group but I'm married to a woman that did. Imagine it, myself, Harriet and 10 of her female friends all being 14 years old again... boy, did I look out of place! Thankfully a couple of 'other-halves' were there for support, but it still didn't stop people looking at me and clearly thinking "I didn't have him down as a Take That fan." 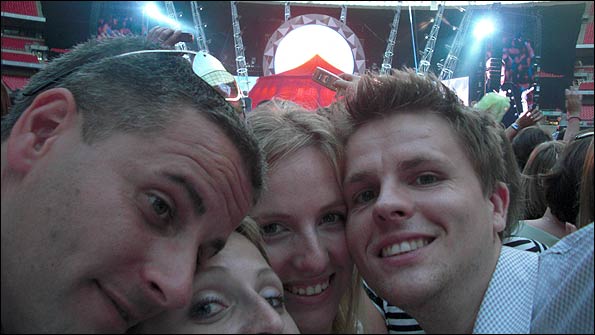 The show was actually very impressive and I found some light relief when I spotted a Brawn cap (how predictable!) in the crowd and went over to discuss aero, Red Bull's new front nose and who is taller, me or Ross Brawn! I didn't know the answer - Ross, I suspect.

I also enjoyed a day out of London when we went canoeing with Harriet's family at Ross-on-Wye. 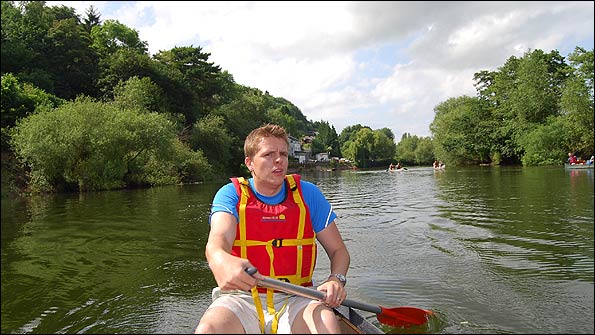 Now, I was a very rubbish Sea Scout for a few years when I was growing up and my skills haven't improved I'm afraid. If there's a surefire way to create World War III, it's to share a canoe with your other half. We hit the bank three times, got beached in the middle of the river and very nearly ended up going for a swim - and yes, it was all my fault of course. 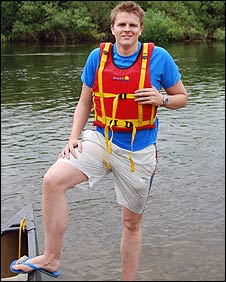 It was really nice to do something totally different for a change though. I thought about inviting the boys but then imagined DC sunning himself in Monaco and Eddie chilling on his yacht, took a look at the rain tipping down while wearing a lifejacket that smelt of musty damp and thought better of it!

I did see David the following day at Wimbledon where we watched the men's final together. What a treat to see such an amazing game and to witness history as Roger Federer made it 15 Grand Slam titles. 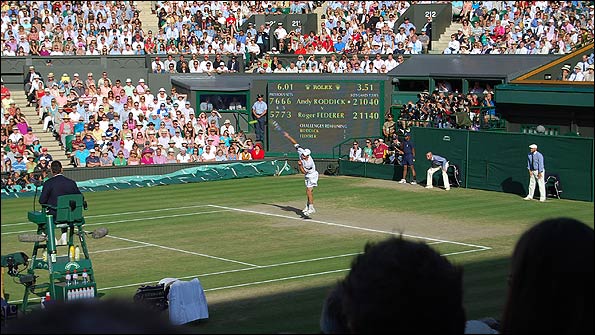 Standing up to applaud him was also such a relief. I'd needed to nip to the loo since the end of the fourth set but thought I'd hold on. Whoops! I was desperate by the time it was four-all but was convinced that if I nipped off I'd miss the winning shot. Suffice to say at 14-all i was just praying for a winner! 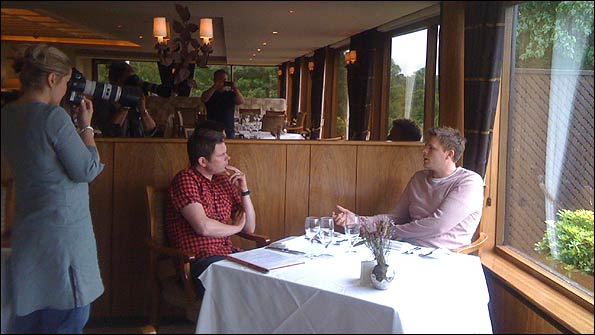 Something else I enjoyed was on Monday when I met up with Hans Seeberg, the editor of F1 Racing, at a hotel near me in Richmond. They wanted to do a feature for the magazine and I got Scott the BBC press guy to take a few snaps on my iphone. I won't reveal why they had me putting my hands over my eyes - you'll have to wait till September's issue to find out!! 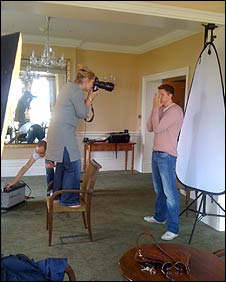 So there you go, at the second attempt, there are the most interesting things which have filled the past two weeks. The rest of my time was far too boring to grace the blog but at least it answers the 'how have you filled the free weekend' question.

And now we have just as many questions as the racing gets going again. I know that some people refuse to even call the Nurburgring by it's old name and that it certainly isn't the challenging track that Jackie Stewart dubbed the "Green Hell" but I am still so excited about presenting from one of the legendary motorsport venues.

Will Brawn have used the past three weeks to claw back Red Bull's clear advantage and who will this track suit? Will Sebastian Vettel do the business in front of his adoring home crowd? Will Jenson get back to winning ways? Will DC and I have a pink-shirted outfit clash?

All those questions will be answered over the course of the weekend.

Just a reminder too that I will be tweeting all about the weekend. You can find out which motosport legend I am hoping to spend some time with on Saturday at www.twitter.com/jakehumphreyf1.

Anyway, enjoy the race and, thanks for reading thanks for the continued support this season.