Enjoying a lap with Jenson and Lewis

I'm writing this having just joined some of the production team for a spot of lunch in the BBC restaurant here at Television Centre.

I know old Terry Wogan likes to play on the fact that the Beeb canteen is hardly a place teeming with top-level TV types quaffing caviar and discussing 'media' - and he's right! The BBC isn't really a caviar kind of place, so I settled for a beans and cheese jacket potato whilst the rest of the guys went for fish and chips Friday.

I must admit I was tempted by the fish but in line with a Humphrey tradition I celebrated my house move on Monday with some cod and chips, sitting on the floor of the new place! Thanks for all your kind messages wishing me luck with the house move by the way, we're in, but it was quite a day!

After the Turkish GP we got a charter to Luton airport on Sunday night where it seemed like the man responsible for getting the steps to the plane also checked your passports and got your luggage out of the hold. From landing on the tarmac the boss Mark reckons it took well over two hours for us to escape to the M1 - at 2.00am and after a rather long race day, it was far from ideal!

So, in bed by 3.00am and up at 6.00am for the arrival of the removal men, who all loved motorsport, which somewhat delayed the packing.

Ten hours later they were all done and dusted and as they left it seemed the cardboard boxes had somehow mated and multiplied. I'm still looking for my passport which is mildly alarming when you do what I do for a living. Bed was calling by about 9.00pm and I was keen to get some sleep - waiting for me the following morning was a certain World Championship leader and a very fast car!

On Tuesday morning, it was a 7.00am alarm and a first (cold) shower in the new place. We had no hot water for two days thanks to an air lock that cost £150 to fix. I managed to make the shower last all of 30 seconds and it certainly woke me up even it wasn't an effective clean, it was then extra aftershave, into the car, off to Silverstone.

Boydy, the producer, told me that under no circumstances could I be late. Jenson was on a tight schedule and we would be filming at 11.15am on the dot. You can imagine my mild nerves when I was stuck in a jam on the M25 at 10.00am, perhaps I was too overconfident and shouldn't have stopped off for a full English breakfast sandwich.

I made it in time and was greeted by the One Show's Christine Bleakley, who still looked gorgeous even in an ill-fitting red race suit more akin to a telly tubby. She's really friendly and was beaming from ear to ear when I got there, clearly very excited about being driven round the circuit by Jenson - but our cunning plan (yes, Boydy does slightly resemble Baldrick) was a little different. 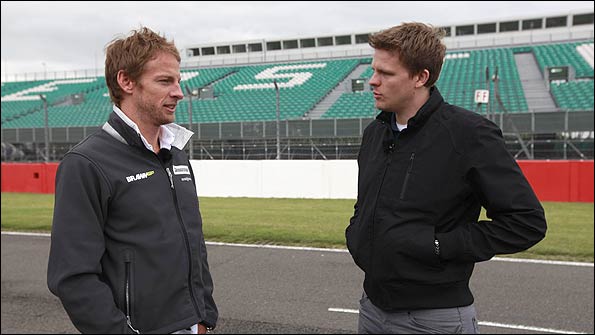 It is very rare for a racing driver to be in a fast car, on a track, and not in control. We thought it was about time we changed all that, and then showed you the outcome.

It's great to hang out with grand prix drivers when they are doing what they love. Jenson is relaxed, chatty and very approachable at a race weekend, but he's still at work. On a day off with a Mercedes AMG 63 at his disposal and a few kilometres of racing track, he's even more chilled out, until it was time to be my passenger.

I have to say being driven around by Jenson was mindblowing as he nailed every apex and hustled the car around corners at seemingly impossible speeds while working the steering wheel overtime - very impressive. When he was driving, the poise, control and confidence which makes him currently the fastest F1 driver in the world was abundantly clear and made me perfectly at ease, even at full tilt. 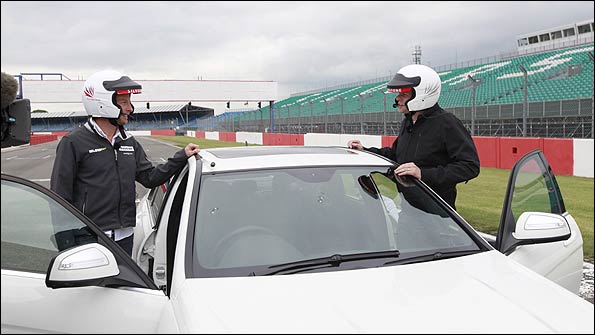 However, his sheer terror when I was driving was equally obvious. For a start he was keen to wear helmets, even those that made us both look a bit stupid, to be frank. Secondly, as I took to the track and gave it both barrels along the start/finish straight towards Copse, his friendly chat suddenly stopped and he adopted a much more serious demeanour.

You'll have to judge for yourself just how much of a liability I was with a car that I proudly left with smoking brakes and bald tyres. In all seriousness, afterwards I asked Jenson how close were to having a shunt. His answer? "Very close," as he removed the keys from the car!

And that's where we differ. He almost instinctively knows where the braking zones are, where you give it full gas and what is the perfect racing line. Despite watching F1 for years and considering myself a good driver (despite the incident with the MGF and £6000 worth of damage) I'm clearly not a natural, and for him to be at my mercy was clearly unnerving. 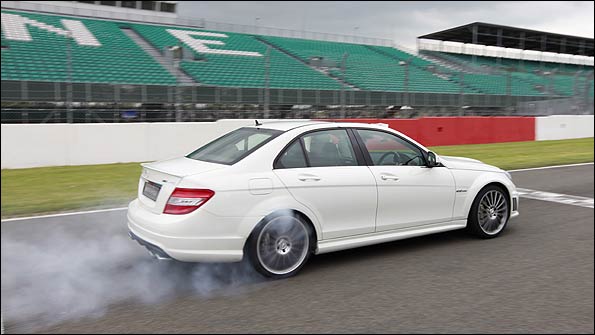 Incredibly he spent most of my hotlap holding onto the passenger seat shouting "BRAKE". I spent most of it thinking to myself "Don't go too fast, Ross Brawn wouldn't forgive you if you did the unthinkable!"

He'd never been driven round there by a 'normal' person before apparently; I doubt he'll do so again in a hurry.

Talking of being in a hurry, 24 hours later I was back on the start/finish straight with the car of my dreams. The McLaren SLR, or to be precise a tuned-up, lighter version, the SLR 277. 650bhp of danger, in the wrong hands. 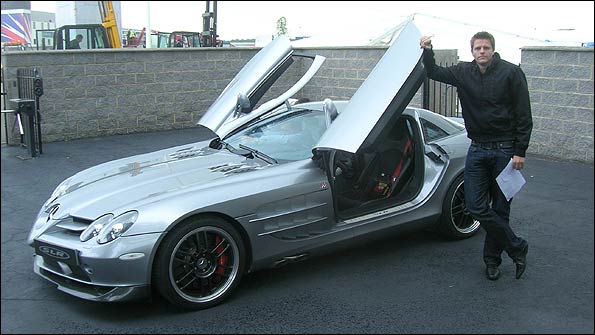 In the right hands however, it was like a speed skater, always on the edge of disaster but always under complete control. On Wednesday those right hands belonged to Lewis Hamilton.

I woke up that morning thinking, in a slightly sadistic way, how great it would be if it rained, and boy did it rain. Lewis likened the conditions to the 2008 GP where he blew the rest of the field away, I regretted my bravado as we stood on the track and it bucketed down. I needn't have worried, he was in complete control and totally impressed me as he took me round. 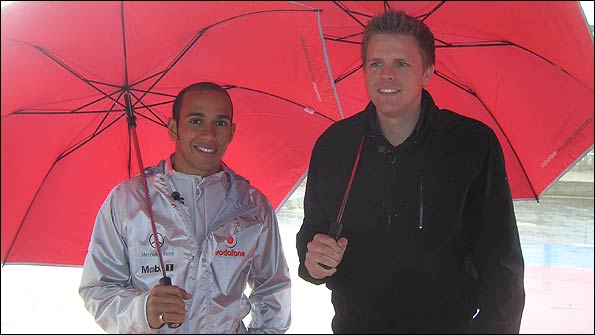 Firstly he wasn't bothered about wearing helmets. Trying to look cool, I agreed. He then took to the track. Stepping out the back end, going full pelt down the Hangar Straight and caressing the beast of a car around the standing water car in torrential conditions.

All the time he was saying things like "This is so dangerous", "There's just no grip" and "Oooh, look, we're aquaplaning". I didn't think it was my place to point out that 150mph might not be a sensible speed then. I just kept my stomach muscles tight and remained seriously in awe.

Hopefully my face will convey just how amazed I was with his control of the car because I'm not sure I have the ability to do it via this blog.

He was sensational, I was a little nervous. The main reason for my apprehension was that the car cost more that the average family home and I was told by numerous McLaren people in their lovely silver tops: "Please don't crash it." Only they didn't say please and they looked very sombre. I also knew a visit to the wall would be more embarassing than my near miss with a Toyota in Turkey. 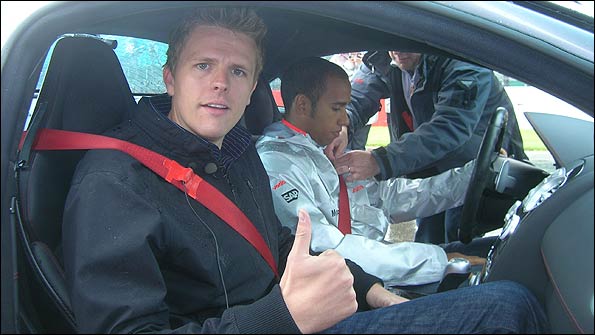 How about this for unnerving someone, though? One of the McLaren guys decided to tell me that the car is so powerful one of the test drivers rolled it for a kilometre after one of the tyres blew out. He walked away, I took a gulp and climbed in.

Suddenly I was responsible for two things worth a fair bit more than I have in my pottery Natwest Bank piggy back circa 1988 (the one with the dad pig in the suit), but unlike Jenson, Lewis seemed totally at ease with me. He shouted a bit as I jammed on the throttle too hard, but as I spun the car coming into Luffield he just laughed! He taught me how to do donuts, and when I asked if I could do one by the wall on the main straight he said: "I don't mind, it's not my car." What a cool customer!

He clearly loves driving, and being on the limit. At one point I totally lost control, he looked at me with a beaming smile and said: "I just turned off the traction control." Cheers, mate.

Looking back on it I wish I'd pushed even harder now, but to be fair the fact both cars and drivers are in one piece is probably enough for me. My overriding emotion though is one of real respect for the talent Jenson and Lewis have got.

You can see the finished pieces over the race weekend. Talking of which, I look forward to meeting lots of you down at Silverstone. Make sure you come and say hi. You can't miss me, I'll be the lanky one with a very big grin as I soak up my first ever British GP and I'm very, very much looking forward to it!