It's 6.45pm here in Turkey, and I'm back in our own little motorhome - it's no BMW-size 'brand centre' but we love it! 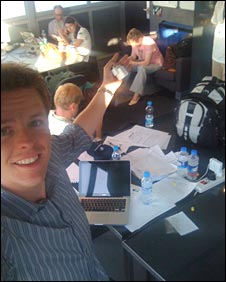 I'm now really hungry, but resisting the temptation to dive into the Turkish crisps that I suspect Ted Kravitz left near my desk. My willpower won't last long though. I've been addicted to crisps since I was knee-high to Eddie Jordan.

I alway come off-air with a seriously grumbling stomach, actually. It's because I find it really hard to eat before we go live to millions of people (understandably maybe).

I'm not sure if it's a nerves thing or just that the adrenaline on the morning of a race tricks me into thinking I can't eat. Usually a banana or a coffee will do, and considering we usually wrap at 6.30pm, my body now needs serious sustenance.

DC and Eddie have no similar problems - this is them tucking into some nosh during Q1 on Saturday. 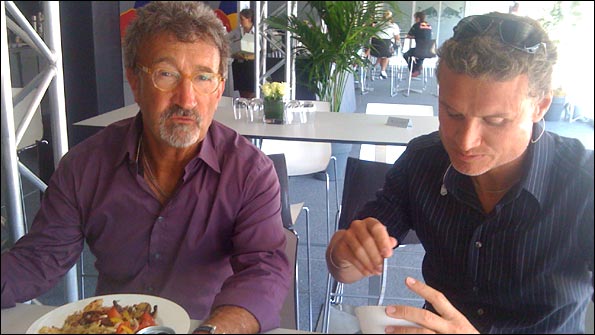 I would grab some grub now but the crew are already clearing away all around me and I never get in the way of their de-rig or I'd soon be in trouble.

I must be honest and say that a blog after this particular race is actually is a little tricky. It's been a very 'normal' weekend for us, for the first time. Well, apart from a brilliant Luiz Felipe Scolari lookalike that we spotted at Istanbul Airport. 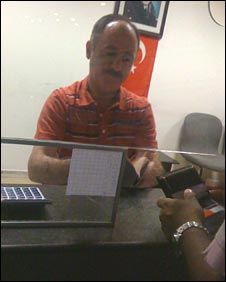 The first four Grands Prix were amazing introductions to the sport, then Barcelona was our first expedition in Europe and Monaco was, well, Monaco! Turkey just seemed to lack anything unique for me.

I like the track and the city is pretty exciting - including the great sunsets as we wait every evening in huge traffic jams to cross the bridge over the Bosphorus to get back to our hotel.

I genuinely think the most important element of any big sports event is the presence of passionate, proper fans... you guys.

This is the pinnacle of motorsport yet just a few thousand were here. Grandstands were covered over and there is a distinct lack of buzz about the place.

I am a huge advocate of F1 reaching out to pastures new and I'm looking forward to Abu Dhabi, but it does need the countries' fans to embrace this fantastic sport.

It's the fifth year there's been a race here, and considering the likes of Montreal have lost their chance to host the F1 party it frustrates me that the Turkish fans haven't embraced the sport we love. 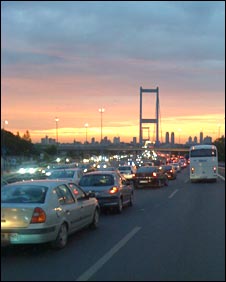 It certainly is a cracking track, and watching the cars gunning it into Turn Eight with DC and Martin on Thursday was a really special moment for me despite the odd bibs we had to wear.

I mentioned on my www.twitter.com/jakehumphreyf1 page earlier about a funny story from Sunday morning... well here it is.

We went onto the grid in between the Turkish touring cars and the Porsche Supercup races and were allowed just 30 minutes to film the opening links of Eddie, David and I that we transmitted at the start of the programme.

Suddenly the word came from the FIA that 30 minutes had become just three. It was pretty funny as Boydy the producer started to sweat profusely and tell us all it was one take or nothing.

The problem was we only had one mic between us so after each of us had delivered our lines the sound man Lee - or 'Tiger' as he inexplicably nicknamed - was grabbing the mic and quickly swapping it between us, as Boydy just shouted out our lines and we repeated them.

We were a little longer that three minutes, but I thought the boys in VT turned it into a great opening piece and we ran off the grid at the end before we either got told off or got to meet a Porsche GT3 up close and personal!

Talking of getting to know the cars, it was an interesting moment to see one of the Toyotas come shooting out of the garage as I prepared to launch across the pitlane myself. Yes, I do know the green cross code and, yes, I have learned my lesson!

I was never really close to disaster but I think Steve the assistant editor was brilliant in a near-crisis moment - that's what we don't pay him very much for - and I'm very grateful of course!

So, next it's Silverstone, and I can't wait to meet all the British fans and the enjoy a race where I know you will all contribute to an incredible atmosphere.

Great to also have a British driver leading the championship as we head there.

Today was another example of just how good the Brawn is with JB behind the wheel. Send it round Monaco or Turkey's Turn Eight and it will rise to the challenge thanks to a driver who just doesn't seem to make mistakes at the moment.

Mark Webber is a really top bloke too so I'm delighted for his eight points... is Red Bull team-mate Sebastian Vettel starting to feel the pressure though?

Anyway, another quickish blog I'm afraid as a flight home calls, and I really do need to get home.

I'm actually moving house on Monday and the removal guys are rocking up at 8am. I land at Luton after midnight. Suffice to say, my wife is more than a little stressed!

Finally, a confession. I forgot my camera this week but I did snap a few iphone shots so I hope the quality isn't too bad!

I'm going driving at Silverstone with Jenson and Lewis this week...I'll blog on that in a couple of days.

Have a great Sunday night!