So, win number four for Jenson Button... the lead gets ever bigger. I'm writing this before jumping on a plane home and although I've not had too long to work out what to write I wanted to upload something as quickly as possible.

Quick story for you. I was chatting to Jenson in the Brawn hospitality area before the race and, despite the fact he was about to jump in his car and battle to victory, he was actually asking about me! How was it going, was I enjoying my first season in the pit lane?

I imagine many other people would be lost in their own thoughts considering the situation. I was impressed and thought I'd share it with you.  His dad seems like a top bloke, too.

Talking of top, I didn't make it onto the third and top floor of the Ferrari 'motorhome' this weekend.  I was actually talking about the teams' houses on wheels with someone from McLaren, who quickly reprimanded me for calling it a motorhome... I think McLaren refer to theirs as a 'brand centre'. Well, whatever they like them to be known as, they are mind boggling! 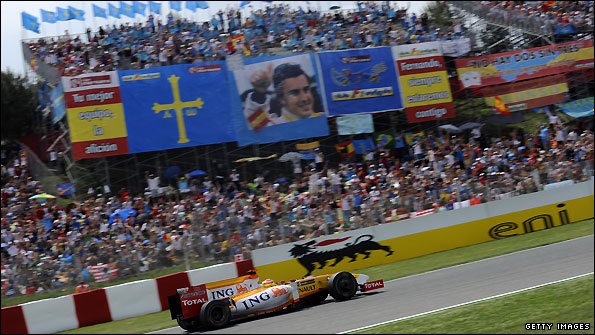 It was, of course, the first time I'd got a close-up view of these structures, which are where guests and media are entertained and where drivers, technicians and engineers hang out. And I have to admit to a little bit of jealousy.

You see, at the long-haul races the teams get the buildings the track supply them with, as do we. Once the European season starts, we all exist in 'brand centres'... some more impressive than others.

Ours has a little kitchen (well stocked with grub thanks to truck manager/driver Pete!), some metal steps that have stripped the skin from everyone's shins and carpet on the walls... but it's a cosy home for our team and I think I'll grow to love it by the time we've lived here for a few races.

By comparison, the way the other half live has to be seen to be believed.  Good old Eddie Jordan got a bit carried away and claimed they cost £40 million to run... I think it's nearer 10% of that but they're mega-plush anyway!

In fact, only a few of them don't have automatic sliding glass doors and I made a right twerp of myself when I expected Force India's door to gracefully slide to the right... it didn't and I walked right into it. Cue a loud bang, a bunch of people trying not to laugh and a very embarrassed TV presenter pretending he meant to do it... suffice to say I didn't get away with it!

I spent most of this weekend in the pit lane as opposed to gorging myself on bread and cheese in our kitchen and I managed to soak up the atmosphere for the first time this season.

Despite one well publicised race-goer giving everyone a bad impression of this part of the world the fans were great.  Their love for Fernando Alonso is quite astounding.  We sent Lee out to meet them on a hill and it was a relief she came back in one piece.  Lots of dancing blokes, gallons of body paint and more Asturian flags than you can imagine.

The roar as their guy came home in the points was something else.

Anyway, it's now 6.45pm and a flight back to the UK is calling.  I won't deny that as an F1 fan the next few races, which include Silverstone and Monaco, have got me feeling like a little kid... I can't wait for two of the events of the season and I hope you enjoy them on the BBC with us.

Thanks to those who pressed the red button and joined us on the F1 forum.  I'll log back on here on Monday to read your thoughts and respond then.

I'd love to hear what you have to say and I'll respond to as many of you as possible.

Thanks again for tuning in!