Living the high life in Monaco

Well, that was some four-day blast in Monaco. It almost felt like the first race all over again because just as Eddie, DC and particularly I got used to wandering the pit lane like three nosy fans with decent access...we get shoved on a boat for the weekend!!

Yeah, I know what you're thinking, on a boat in Monaco...hard life Jake...but as much as I felt like the cat that got the cream, I did kind of miss being in the heart of the action.

There is something that always makes me tingle when I am live, feet from the drivers while they put their helmets on and prepare for battle, so it was a shame not having that connection.

Talking of feet, ours were able to breathe on the boat. Shoes were banned on deck so it was socks all the way. 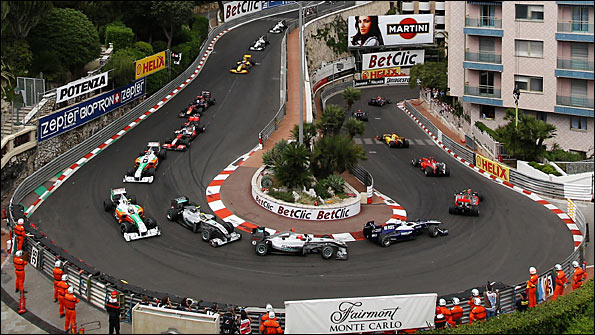 DC had identical socks on both days but I don't think he's the kind of guy to wear the same pair two days running...do you?

We are now all on a bus after a bit of a trek - the taxi drivers couldn't get to our TV area so we all had to walk about 30 minutes in convoy to where the buses were.

When passers-by pointed them out, the crew thought they had all become famous for being on the blog before they remembered that they were being spotted because they had BBC emblazoned on their tops.

Mind you, someone did stop Sunil to ask if he was the guy who chooses the music - they'd seen the post-Barca pics I uploaded.

Anyway, Monaco was a real culture shock for me. Loads of people are staying on for the parties but, to be fair, if there is one place it's good to shoot away from in my opinion this is it. It doesn't have the space of Australia or the class of Barcelona and while the GP is the one that really stands out for me on the calendar, I'm not sure about the vibe of the place.

In fact, my favourite moment was when Legie and I escaped and had a romantic meal for two at the hotel.

Due to the cost of staying in Monaco we were holed up in a place in the mountains above Nice that was 25 minutes away.

It was a typical simple French hotel with a little terrier called Nino that followed me around, a red 2CV out front and thousands of very loud croaking frogs that sounded magical at night.

The food was whatever the owner knocked up in the kitchen and was a great way to end Saturday, particularly the local red wine...in Murray Walker's words, FANTASTIC!

My moment of the weekend? Murray joining us live from the paddock on Saturday pre-qualifying and being his usual brilliant self. When he answered one of my questions using the words 'well Jake' I couldn't believe it. The man who simply was F1 in the UK for so long actually knows my name!

So, the weekend from my perspective. Well, you'll be pleased to know I've learned my lesson about the sliding doors and there were no embarrassing incidents with motor homes this week. In fact there wasn't time for much!!

On Thursday evening McLaren asked me to host a pub quiz for the team. They really went to town for their staff with scampi and chips and proper ale brought over from the UK. It was a morale-booster and seemed to go down really well, even when I joked as I awarded the prizes that it might be the most points they see all season.

I have found the whole of 'Maca', as Martin Brundle calls them, really supportive and open since the start of the season so I was glad to give them my time.

However, I wasn't so glad when, after less that four hours in bed I was up at 4.15am to get to DC's place, pick up his gorgeous 1971 Merc and head onto an empty-ish track before it was closed by the police at 7am.

It was worth getting up early to drive the course with a two-time winner, even if he did have to cut the chicane to overtake the bin lorry. He's a great bloke, DC, and I'm really starting to enjoy spending time with him and Eddie.

That evening I would have liked to be in bed by about 7pm but was asked to present a drivers' fashion show to raise funds for the Elton John Aids Foundation as a favour. I was only too happy to do my bit.

My co-host was Bernie Ecclestone's daughter Tamara, and while I made do with a Reiss suit I bought in the sales a year ago she wore £2m worth of diamonds...only at Monaco, hey?

That finished at about 11pm and by the time the frogs were croaking me to sleep it was gone midnight and I was well aware that 6am would soon be upon me.

So you can appreciate how welcome a quiet meal was on Saturday night now!!

The boat we'd managed to borrow the sun-deck of was packed with Jenson Button's Dad's mates, and after his win Jenson cruised along the harbour side right in front of the boat, did a huge wheelspin and gave everyone a wave.

He really seems to be at home at the front. Unfazed, pulling out the flying laps when needed, and remaining scarily consistent. The boy's quick. Let's remember he's also leading a team that until a few months ago didn't even exist and now he's leading the championship by 16 points.

By the way, If you only watched the race and not Saturday's output I suggest you give it a whirl next weekend. We get a bit of breathing space that Sunday doesn't afford us.

Oh, and PLEASE accept an apology from me that we didn't get the press conference away which I know is a huge bugbear (of mine too!). We did show it on the red button but basically we were unable to do so on BBC One because of the unusual circumstance of the last day of the football season. If we'd run over at all, Final Score would have come on air after the final whistles had blown... far from ideal.

We're all F1 fans on this show and will always fight your corner and do all we can to make the output as good as possible.

Thanks, by the way, to all the people who came up to say hi over the weekend - great to meet you all.

Finally, now we've arrived at the 'Riviera' restaurant (the name is deceiving!) at Nice airport it's time to sign off by saying check out the blog later in the week for some video and photos of the weekend that I have done.

No kisses this week...