How Cat Deeley got me a Lotus Elise

Hope you all had good weekends. We spent yesterday hanging out with our good friends in Tunbridge Wells. While the wives discussed weddings and looked back at their respective albums, my mate Grant and I gloomily discussed relegation.

He's a Brighton fan and I support Norwich City... Thank goodness two weeks from today I can forget football a little as I'll be on the other side of the world having arrived in Melbourne with the BBC production team for the Australian Grand Prix.

So, a few people wanted to know how I landed a "free" Lotus Elise at just 20 years of age having only ever driven my Mum's gorgeous "pistachio green" VW Polo 1.3 until that point. 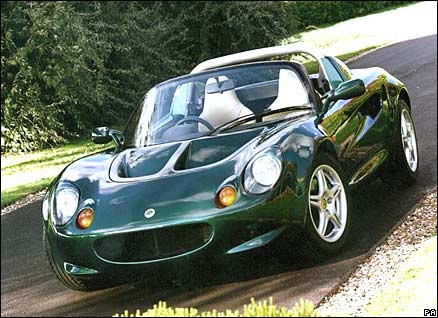 Well, at the time I worked for Rapture TV. I'd just finished my A-levels and, after a stint of work experience, I was offered a job as researcher and presenter on some princely sum of about six grand a year.

The show I presented, filmed for, wrote the script for, booked the guests for, and helped edit was called "Gamers". This was very, very early cable days in the UK - multi-channel wasn't the norm, and this was seriously niche TV. Sometimes my job was to man the phone room. Six hours, one call - outgoing to my Mum!

Anyway, out of the blue one day we were told ITV wanted to show Gamers every Saturday after the brilliant SM:TV. What!?!?

After the shock had died away, we started planning for the show, and the producer, Dan, decided it would look cool if I arrived at shoots and in the studio in a car that was pretty special.

Lotus was nearby so he put in a call to their PR department and proceeded to charm them with some long-winded "primetime Saturday afternoon/great PR opportunity" chat.

After a steady to and fro of emails etc, it was agreed that for the mighty price of one English pound we'd have media access to a range of variously coloured Lotus Elise 111S. The only downside was sorting my own insurance!! Ha!!

Can you imagine the phone call? "Hi there, yes, I'm 20 and work as a TV presenter. Yes, I've got three points already. Oh, it's a Lotus Elise, but I can keep it in a garage if that lowers the premium."

I ended up having to part with £1,200 for six months' insurance. I had no savings, no way of getting the money and earned about £450 per month. There was only one option - time to go into debt to secure the car of my dreams. Boy, it was worth it!

What a car. The Polo hadn't given me much of an idea of how special driving along the A11 can feel! I've yet to have a driving experience quite like it. No other car has ever made me feel as emotional or as good a driver. It was sheer disbelief for a guy like me to be driving that car. I still lived at home and used to go down to the garage and just look at it, polish it, turn the key and listen to the 1.8 VVC purring away.

I realise how lucky I was to experience that car for a few short months - which incidentally turned me into quite a catch on Norwich's infamous Prince of Wales clubland. I also got to know the local bobbies pretty well - they always wanted to speak to a late-developing lanky lad just out of his teens who drove a Lotus. The debt was just something it took me a few years to pay off!

So, there you go, a little story to kick off the week... I'm sure you all have a car or two from the past that just captured a period in your life. I think that car is the reason I'm obsessed with the new Lotus Evora. I do, however, need to realise that I'm not suddenly going to be 20 again if I manage to buy one!

Anyway, have a great day, look forward to your responses, speak later.