Final reflections on a memorable weekend

Well, well, well... welcome back to the BBC Formula 1. I've missed you!

I am writing this on a flight between Melbourne and Kuala Lumpur where we're flying for the next Grand Prix. It is round two of what has started as a knockout season, and we're expecting more fun and games this coming weekend - rain is predicted.

I am not sure what your perspective was of the Melbourne race but I thought you might like to hear mine.

It started with total disbelief that it could possibly be time to get out of bed.

The night before the entire team decided that after qualifying we should go out for a bonding meal, as for many of us this is the first time working together.

It was delicious. Well, the few sips of a well-needed pint were, until word filtered through that there may be an issue with Toyota's rear wing.

Cue a dash all the way back to the circuit in the dark to track down the Toyota boss John Howett, get the full sp and then re-record the closing link for the re-run of qualifying that was transmitting minutes later.

I love this type of skin of your teeth, reactive broadcasting and the teams were very understanding of our extra-late shift, so kept us happy with coffee and rather odd apricot pastry things.

As I was drifting off, all my brain kept asking me was "when are you going to write the script for the race show then". Blasted conscience!

So, as I'm sure you can appreciate 6.30am was a little uncomfortable, but there was little option so I had a cool shower and got to work writing, stopping for a coffee about 10am and for a live interview on the phone (whilst ironing my shirt for the show - the glamour) with Steven Nolan of Five Live.

I arrived at the circuit via cab with Eddie Jordan and Lee McKenzie at about 11.30am. I chatted through the show with Mark the boss - we'd totally rewritten the running order to reflect qualifying. I then got changed in the back of the edit suite whilst the guys put the finishing touches to the Jenson/Lewis VT... they kept their eyes firmly on the screens! 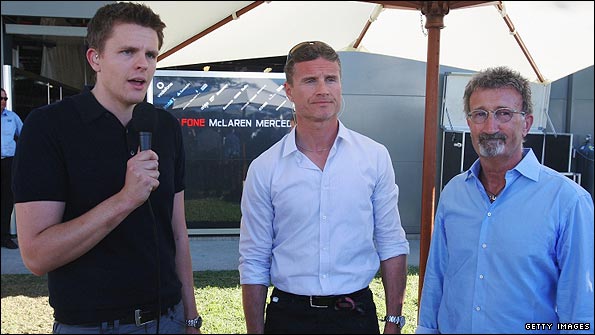 I then met up with the boys (David Coulthard & Eddie Jordan) who had texts from various celebrities. Whilst Eddie's best wishes came from the likes of Mick Hucknall I was quite happy and rather impressed to get my dad's message to say that in Upper Stoke they'd let the dogs out and were nervously eating toast.

Then it was time to get mic'd up and host my first ever live F1 race. Totally surreal.

Two minutes to on-air and into the pit lane. The first thing you aren't expecting is the number of people. DC took us through the Red Bull garage as the team put the finishing touches to Mark Webber and Sebastian Vettel's cars and we emerged into a pit lane that resembled Wembley Way five minutes after the final whistle.

We walked down to the Brawn garage, where we opened the show from. Rather surreally DC was played a tune on a bagpipe by a random guy wearing a kilt standing on four-foot stilts... that's my overriding memory as The Chain introduced our first race on the Beeb in 12 years.

After that most of the following couple of hours were a blur. We had a couple of hairy moments. When the jets were screaming a few hundred feet overhead and simultaneously the cars were leaving the garages, for example, I couldn't hear EJ or DC talk, the gallery issuing me instructions, or myself think. Puts into perspective just what a talented pro my predecessor Steve Rider is.

Relieved Sir Richard Branson kept it clean. Happy with how Eddie and David slipped into their new roles, seriously impressed by Martin Brundle's gridwalk and quite happy when I was able to hand over the reins to commentator Jonathan Legard.

Before we knew it though the race was coming to an end and it was back to the mayhem, standing just under Jenson, Rubens and Jarno enjoying their champagne moment. The pit lane was now full of cars, mechanics, celebrating Brawn GP guys and what seemed like a million TV crews.

Now, the team off-camera all wear our uniform of blue tops with the yellow BBC Sport logo and as I've just learned, that is almost the most important element of the whole weekend.

Here's why. Take the press conference for example, there's no way of us knowing how long it will last, but whilst it is being transmitted we have to get from pit lane to paddock.

Not easy when dodging crowds and equipment everywhere, especially when it's your first time in that environment. I kept my eye on the blue shirt of my right-hand man Steve Aldous's shirt as we jogged, sidestepped, doubled back and finally found our pre-determined paddock spot.

I recall hearing Norma the PA say down my ear, "10 seconds left on VT we believe". I breathed out, turned to my left... NO PUNDITS!

Cue sheer panic as I tried to pick out the distinctive figure of DC and the diminutive Eddie amongst the crowds. At the last minute I saw them, did my best face of panic, they got the message and with moments to spare they were in position.

Then I just had to get us off air to the second and I managed it, just, which no doubt pleased Norma.

We then did the interactive F1 Forum live via the red button. By the way I'm keen to make it much more of an interactive experience so after the Malaysian GP do press red and also send us your questions/thoughts about the race to f1@bbc.co.uk.

I know many of you enjoyed Martin joining us, and hearing from the Force India boss Vijay Mallya. The general consensus if you didn't manage to join us was that the day belonged to Brawn, and Jenson in particular.

It was also agreed that overtaking did seem more prevalent under the new regulations, that Lewis Hamilton proved, like a true racer, that he doesn't just drive great cars, and that this could shape up to be some season.

Then, finally, the words we all enjoy after a long day: "That's a wrap".

Well, I hope you found my little tale interesting, it's just that I'm often asked what actually goes on during a show. So I hope I shed a little light on it for you. And as for the show, well it was basically an on-air pilot, our first crack at it. A totally new experience for many of us and a good starting point but all we've done is set the minimum standard in my opinion - and now we do it all again in six day's time and for the next seven months.

By the way, the day ended with me ducking out of a nightclub at about 2am with very droopy eyelids, and still no text from Mr Hucknall!

See you all in Malaysia and thanks for the lovely comments you left on the blog. It meant a lot.