It has been a very disappointing week for Scottish teams in terms of progress in Europe, and a somewhat forgettable few days for me personally after my departure from Hamilton. It would be no surprise therefore if this week's blog was one of negativity and inquest into what went wrong.

However, I thought I would lighten the mood and try to take football lovers back to the good times by discussing the ever-changing goal celebration and the recent trend towards dampening scenes of elation with new regulations and the cautions that come with them. 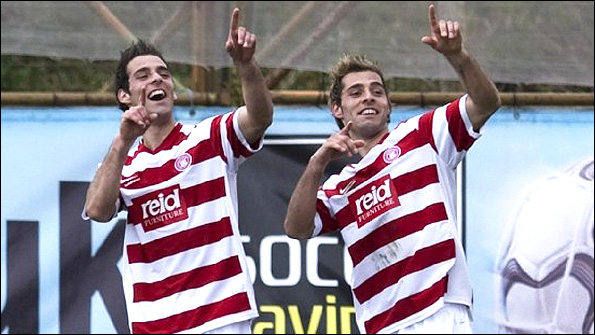 I am sure that most would recognise that the celebrations that follow a goal have become far more exuberant and rehearsed in modern times and perhaps there are some who yearn for the days of the simple old fashioned handshake.

And yet if we accept that times have changed and that the current-day player will opt for a more flamboyant celebration, then should we not seek to embrace it as part of the entertainment the game can offer?

I say this because during my career I have attended many soccer schools for children and, while the kids enjoy the specialised coaching and tips they receive, the highlight of their week almost always comes from them or their team scoring a goal.

Any player or fan will tell you that the ball hitting the back of the net is the greatest feeling in the game, and the elation that comes in the aftermath is very difficult to replicate.

Furthermore, when I have watched these children score, they usually run off mimicking their own personal favourite goal celebration, whether it be the latest one used by Cristiano Ronaldo or the star striker at their local team.

Celebrations play major roles in football folklore, sometimes more than the goal that preceded it. For example, I was very young but remember Marco Tardelli's joy at scoring in the 1982 World Cup final but have no recollection of the goal itself.

Similarly, I am sure that there are many that enjoy the memory of Roger Milla's corner flag shuffle and Jurgen Klinnsman's dive and happily admit it brought a smile to their face as they watched them.

In a climate where we are desperate to encourage more fans to the game, and eager to capture the interests of kids, then surely we must foster an aspect of the game that only encourages a feel-good factor in football.

I acknowledge that there is a valid safety reason for the decision to inhibit goal celebrations but surely a more common sense approach could be applied and players given more licence to interact with their fans after a goal is scored.

Within the Sportsound programme "The Pitch" there was a discussion asking for potential rule changes from players and fans alike, and while there was a host of alterations proposed, the regulations surrounding goal celebrations is one I would like to see altered.
.
Anyway, enough of the talk of the good times in the game and back to my own situation.

I am unsurprisingly disappointed to be without a club at this time of the season but offer no ill will towards Hamilton, and indeed I spoke to several of the players before their game at Inverness and was delighted to see them get back to winning ways.

I am open-minded about my own future, and will look forward to whatever that provides!