Do fans influence the outcome of matches?

The lack of transfer activity throughout this close season is perhaps best illustrated by the coverage given to whether clubs would embrace or embargo the soundtrack to the 2010 World Cup, the vuvuzela.

Having never played in a match where thousands of fans are blowing their trumpet, so to speak, I cannot say for certain how distracting or irritating they are to a player but I did find it interesting that some of the world's top players complained about the noise they created.

Surely these players would have played in the fiercest atmospheres where communication with team-mates and coaches is practically impossible due to the crowd volume. If a traditional African instrument can create problems for players, is it fair to say that those in attendance at a match can have an influence on players, teams and therefore results? 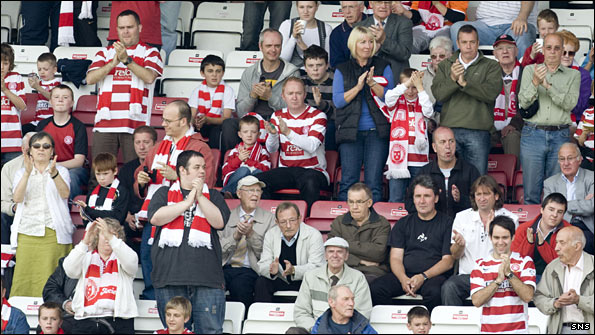 Most people involved in football would suggest they do, as witnessed by those teams who turn home stadiums into fortresses with the help of a fervent support and those who achieve near impossible results with the backing of a larger than normal and more audible away support than normal.

My own view is that there are other factors which will have a greater influence on performance but there is no question that a positive and passionate support behind you is still a significant tool in terms of what can help a player.

In my own experience, I have usually been more aware of or felt a greater influence of fans supporting my side when I have played away from home. As a rule, it would seem that those who travel tend to offer more vocal support than at home and there are several matches which I remember fondly for such reasons.

In my time at Falkirk, the derby match at East End Park against Dunfermline always saw Falkirk carry a huge support to Fife and, as you exited the tunnel at the far end of the stadium, you could not fail to be motivated by the sight of a packed away stand at the far end of the ground. A further match where the fans undoubtedly played a significant role was strangely enough at Falkirk for St Mirren in a crucial relegation game. The Buddies fans were present in large numbers even as we went out to warm up and their backing was vital in a great team performance.

Therefore, if it is agreed that fans can help a team win a game then is it safe to assume that an overly critical support can inhibit a player or a side's display. Again I would say, to a certain degree, of course a player should be strong enough to accept criticism and most accept it as part of the job but there are occasions when it can become a problem and difficult to handle.

Players, in my opinion, easily deal with abuse from supporters of other teams but can react badly when on the receiving end from their own fans. I have played with team-mates who have clearly become targets from fans and others who have heard those backing their own team cheer as they are substituted. In each case it is usually very evident as to how much it impacts upon their displays but also how much it drives them on to improve displays and win over the doubters.

As the start of the season draws ever closer, players will expect criticism, most will receive it; but when the praise and support is clearly felt it might just be the difference between defeat and victory, sixth place or ninth place and so on.

Finally, having played our latest friendly in Spain against Malaga, most of our players would have been blissfully unaware of any shouts from the home fans who packed into the small stadium in Benalmadena. The game itself was a terrific pre-season work-out against a La Liga side and, while losing the game 2-0 is still a disappointment, the fact that we enjoyed the match so much was indicative of how well Hamilton played for large periods of the game.

As a player the best tests in friendly matches are against the top teams, as you have to work incredibly hard to get the ball from them, hence improving match fitness levels. Furthermore, you then have to be assured in possession to make sure the aforementioned hard work is not in vain and, mentally, concentration levels must be really high as players who have commanded transfer fees in the millions, as Malaga had, will punish any mistakes.