Versatility is crucial but can be a curse

Good players can play in any position is one of those idealistic football theories that is very rarely proven to be correct.

Of course, players should be aware of the tactical implications and football ability required to play in different positions within a team but it is only natural that the skills and attributes they possess will restrict them to being able to playing one or two roles, or in the more versatile cases three or four.

Versatility is vital in today's SPL as teams operate with smaller budgets and consequently smaller playing squads and therefore managers will be delighted to bring those capable of filling a number of positions to their club.

There is however a downside to being one of those players labelled as versatile in that it can sometimes be more difficult to cement a permanent place in the starting eleven as you may only be seen as back up to a number of players.

What is more impressive is those players who are used in different positions from their natural or usual role, and then go on to become a regular and major success in their new position. 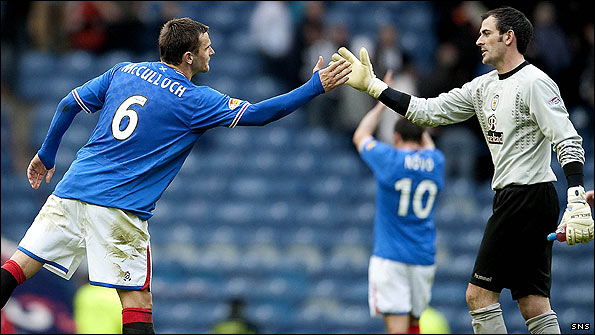 To be able to adapt so successfully requires good football knowledge, a willingness to make changes to your game and being open-minded enough to listen to advice no matter your age or experience.

One successful example of this was all too evident to us at St Mirren on Saturday in the shape of Lee McCulloch.

His contribution of two goals was obviously vital in Rangers winning the match, but his overall performance from the centre of midfield was - as it has been all season - a big part of Rangers performance.

Lee has progressed from a striker to a wide midfielder to his current position and it speaks volumes for his capabilities as an all-round player that he has made this most recent change such a successful one.

There are several other examples that come to mind, with another Scottish international Graham Alexander being one, as he continues to influence Burnley from a deep midfield role having spent a large part of his career playing as a full back.

I must say that having done part of a coaching licence alongside Graham, and witnessed first hand how technically good he was as a player it is not a surprise that he has managed this reinvention so well.

It is worth noting that sometimes a positional change is forced upon a player through necessity rather than choice.

For a winger who has relied on their pace, the loss of speed may see them seek more central roles or a move to playing full-back, just as some full-backs who lose their ability to overlap may opt to capitalise upon their defensive capabilities and switch to centre-half.

Another factor in the reasons for players changing their preferred positions on the field is the changes in the demands of playing certain positions to what was previously required.

Full-backs are now expected to offer just as much, if not more going forward, as they are defensively.

The willingness of more teams to commit both full-backs forward at the same time has seen the creation of the sitting protective midfielder.

And the increased popularity of the use of the lone striker has been the catalyst for the increased number of players "in the hole" or just off the main attacker.

Personally, I am and probably always will be a frustrated midfielder. I played most of my early career in this area of the pitch, and while a fair percentage of my senior appearances have been as a full-back or wing-back I would still love to return to a midfield role at some point.

As things stand, having been suffering the frustration of absence through injury over the last three games, I would happily take a return to fitness in any position!