Thought for the Day: "a genuinely difficult question" 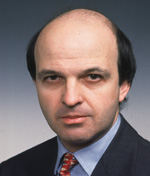 "I regard this as a genuinely difficult question. There may be a case for widening the pool of contributors on Thought for The Day by having someone with an avowedly non-religious perspective. However on balance the BBC's position is that it is reasonable to sustain the slot with believers. Let me now set out the reasoning.

Thought for the Day is a unique slot in which speakers from a wide range of religious faiths reflect on an issue of the day from their faith perspective. In the midst of the three hour Today programme devoted to overwhelmingly secular concerns - national and international news and features, searching interviews etc - the slot offers a brief, uninterrupted interlude of spiritual reflection. We believe that broadening the brief would detract from the distinctiveness of the slot.

Within Thought for the Day a careful balance is maintained of voices from different Christian denominations and other religions with significant membership in the UK. We are broadcasting to the general Radio 4 audience which regularly engages with the comments and ideas expressed by our contributors from the world's major faiths - whether they are believers or not.

Outside Thought for the Day the BBC's religious output contains both religious and non-religious voices in programmes such as Sunday, Beyond Belief, Moral Maze. In these programmes atheists, humanists and secularists are regularly heard, the religious world is scrutinised, its leaders and proponents are questioned.

Non-religious voices are also heard extensively across the general output in news, current affairs, documentaries, talks, science, history. These programmes approach the world from perspectives which are not religious. As, of course, do the other 2 hours 57 minutes of Today."

Do you agree? Catch up with the previous discussion here.