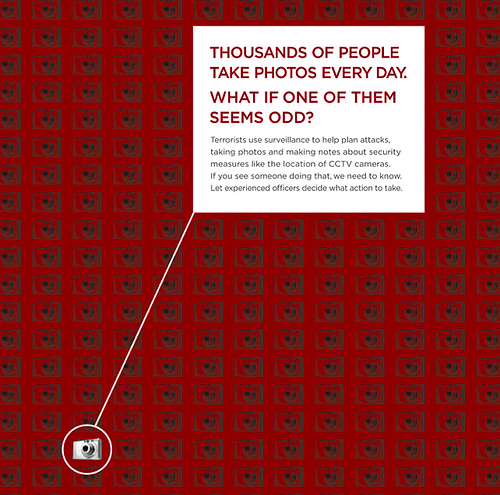 The picture above comes from a Metropolitan Police ad campaign on the London Underground published nationally. 'Thousands' of people is an understatement; over 2 billion pictures have been posted to to photo-sharing website Flickr alone. Given the ubiquity of camera phones, it's doubtful that there's a square inch of public space in the UK not documented somewhere on someone's hard drive, website or memory stick.

So is this a golden age for British street photography? Not according to the amateur photographers and bloggers who have been setting the, er, photogosphere alight with stories of detentions, cautions and forced deletions of their pictures by police officers, PCSOs and wardens. Labour MP Austin Mitchell filed an Early Day Motion last month condemning police actions that prevent lawful street photography and calling for clarification of the law. It's attracted over 150 signatures in the Commons.

Photography in public places is perfectly legal, but anti-terrorism and child protection legislation have muddied the waters somewhat and according to Mitchell, may have given those enforcing the law a misleading impression of what is and isn't allowed.

The video below has been making the rounds online this week. It shows a Middlesbrough man apparently being detained by security guards outside a shopping centre, after taking pictures in the street. As the photographer describes the event:

A policewomen was radioed and came over to question the two suspects ( the total detaining us had risen to seven, a large crowd had now gathered) The detaining guard released me, i asked the policewoman if my friend and i could be taken away from the six guards, she motioned us to a nearby seat and told all the security people to go. She took our details, name, address, date of birth etc. She wanted to check my camera saying it was unlawful to photograph people in public, i told her this was rubbish.

The video only shows the initial confrontation with a shopping centre security guard, but does give a sense of the misunderstandings many street photographers face.

We're keen to do something on this issue - but I wonder if there's a good iPM treatment that wouldn't simply retread old ground. The claim that these incidents are on the increase is so far anecdotal and untested, so we briefly considered crowdsourcing it (like our broadband story in the previous run). But whilst a Google map of arrested iPM listeners might be compelling to look at, it's not quite what we're after...

So we're throwing it open to you. Any ideas that could shed some light on the phenomenon? Is there some way we could verify the apparent increase in incidents like these?

Or do you have experiences of your own to share? Are you a Police Officer, Community Support Officer or security guard with your own take on the issue? Let us know in the comments, or email us at ipm {at} bbc.co.uk.

UPDATE: Mark Whitaker emails to tell us about the Manchester Flickr group he runs, on which numerous photographers are sharing stories of being moved on, "politely or otherwise."

UPDATE: Here's a long version of the interview we did with Austin Mitchell MP. We also spoke to Mark Whitaker and to Peter Smythe, who chairs the Metropolitan Police Federation.