Can wearing a poppy show bias?

The annual Poppy Appeal by the Royal British Legion ahead of Remembrance Sunday is well underway. Politicians and presenters on TV are already sporting a poppy, as are many members of the public. 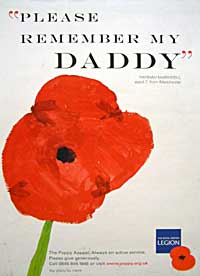 The question has been raised though by "Bystander", who is Britain's most popular blogging magistrate whether or not JPs ought to wear the symbol while they're sitting on the bench, dispensing justice. Could it lead to accusations of bias? You can read in full the comments received here, but "Bystander", whose blog has now had more than 1m page views, told iPM more about the conversation on his blog:

We're hoping to hear from the Magistrates Association later.

If you have any thoughts about whether sitting magistrates should wear a poppy while on the bench, let us know by posting in the comments section below.

Update on Wednesday from Marc:

I've spoken to the Magistrates Association, who sadly aren't willing to provide someone for interview. They told me that there is no official policy regarding poppies for JPs, merely that "it's a matter for individual magistrates to decide". The MA "might" form a policy if it's raised as an issue through the official channels by a JP, but "it's not been raised recently, so we're not considering it actively"