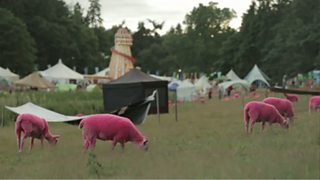 Hi there, it's Graeme and Richard here from BBC Music Introducing in Suffolk.

This year's Latitude festival will be the eighth at which we've broadcast from, and in that time we have had the pleasure of taking more than 20 bands from Suffolk with us - the majority of them opening the music showcase on the Lake Stage on each day of the event.

Our picks this year couldn't be more different - Bessie Turner has the most beautiful voice and songs with which to delightfully soothe an audience, while Rad Pitt bring the riffs, the noise, and an all round chaotically brilliant live show.

We're delighted to see that SuperGlu, who we first picked to play Latitude in 2015, have been invited back for the third year running, and OUTLYA will be performing too on the Alcove Stage.

A welcome addition to the festival last year was the BBC Music Introducing Stage. Here you can enjoy live new music in the beautiful surroundings of the Henham Park woods.

The stage returns again this year, hosted by an array of BBC presenters including Max Reinhardt from Late Junction on BBC Radio 3 (supporting world music), Suzy Klein from In Tune (all things Classical) and Tom Ravenscroft on BBC 6Music.

Suffolk will have representation here as well following the recent announcement that hip hop producer Piers James has been added to the bill (below), along with hypnotic folk outfit Fishclaw.

Latitude has grown into comfortably the biggest music and arts event in the county and it is such a wonderful festival to be a part of.

If you plan on coming along then come and say hi.