Hello, I’m Jen Long. I look a bit like a mini Joey Ramone and am currently trying to recover from a crushing addiction to sandwiches. 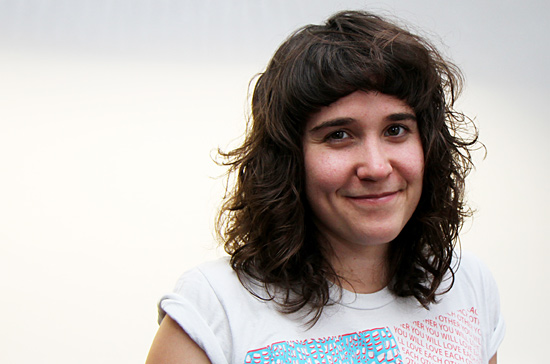 From Sunday I will be presenting BBC Introducing in Wales, taking over from the brilliant Bethan Elfyn who you can now find on your wireless if you turn the dial towards Radio Wales. It feels strange, to say the least. I’ve been working on Bethan’s show for the last three years making notes, tea, and suggesting hilarious features - Beth From Above, Beth Becomes Her - that strangely never made it to fruition. I was pretty chuffed when I first got that job; I used to listen to Bethan and Huw back in the old days, dancing around my tiny student bedroom.

I went to University in Cardiff where I forged a frontline in the science of teleportation, once managing to transport a teaspoon from Newport to New York. Not really. I studied Journalism.

I managed the student radio station, Xpress Radio and graduated in 2006. Thereafter I had a run of both awful and amazing jobs including HMV sales assistant, managing rehearsal rooms, and driving a band across Europe.

Nowadays you can usually find me in the corner of Clwb Ifor Bach necking an orange squash. I write for a few different websites and magazines; I have an MP3 blog at waitfortheclick.co.uk, I promote gigs under the name FLUX=RAD, and I DJ here and there too.

Over Christmas I’ve been down the pub exercising phenomenal bicep curls and pounding my ears with some of the freshest, most exciting music around. I am ready and excited for Sunday. Bring it on.

Over the next month we have sessions from some immense bands including Cut Ribbons, The Joy Formidable and even a trip to Eurosonic with the electric Islet.

Which Welsh acts are you most excited about playing in 2011?

1. Demolished Thoughts; Ecstatic Peace Showcase, SXSW.
I am a massive Sonic Youth fan so just the chance to spend five hours in a venue with Thurston Moore was mind-blowing enough. Demolished Thoughts are a hardcore covers band comprised of Thurston on vocals, J Mascis and Don Fleming on guitar, Alison Awesome on drums, and Andrew WK on bass (although Andrew never showed up so Jonah from F***ed Up took the call). They were so vicious and violent, it was immense and I was in complete awe for most of the set. So much so, I didn’t notice the stage-diver flying fist first at my face. Spent the next day nursing a right shiner of a black eye. I looked badass.

2. HEALTH; Primavera, Barcelona.
Everything about this band is exciting. Live they’re so threatening, in a purely audio sense, you just never know where the set is going to take you. Health played at 4am on the Saturday at Primavera last year. Any gig that starts with you telling your friend, "Hold my bag, I’m going for a mosh" has to be a good one.

3. Tiger Please, Cut Ribbons, Drains, The Muscle Club, Hyener and I Am Hope; in my kitchen, Cardiff.
My housemates hate me.

4. Pavement; Primavera/All Tomorrows Parties.
This was a bit special. At Primavera, I was in a line for the toilet when Stereo dropped and I just remember grabbing my friend and us running through the crowd right as the chorus kicked in. I know everyone’s doing reunions now but last summer was so great. I can’t wait for Pulp this year.

5. The National; Latitude Festival, Suffolk.
I would like to take this moment to apologise to anyone who was standing near my friend Annette and I during this show and had to hear us sing every line at twice the volume of the PA. I do not regret my actions.

Do you have an all-time favourite gig venue?

I grew up just outside London so a lot of my gig memories are of going to ‘sleep round a friend’s house’ and jumping on a train instead. I went to a lot of shows at The Astoria and I’m really sad that it’s gone. I love Clwb Ifor Bach in Cardiff, The Fleece in Bristol, Union Chapel in London, Pianos in New York. But that said, sometimes it really doesn’t matter where you put on a gig; it’s the band and crowd that can make a show.

Everclear at The Astoria in October 2000. The next day I pretended to be sick so I could get sent home from school and listen to them on Jo Whiley’s Live Lounge.

First ever album you bought?

I don’t remember. I remember trying to buy Take That and Party but it was £8 on cassette in Woolworths and my mum said it was too much and I wasn’t allowed. I suppose my entire career is just an effort to recover from that particular childhood atrocity.

Listen to advice about the music industry from established Welsh acts in Jen's series of features, cunningly titled The Long Report.