At the end of last year I blogged about the new responsive BBC Indonesia mobile site and I'm now very proud to announce the launch of several more language sites into our Responsive Design News product.

These are Russian, Afrique (French for Africa), Mundo (Spanish for Latin America) and Hindi and join the Indonesia site along with Hausa, a Nigerian language which was also released at the end of 2012. 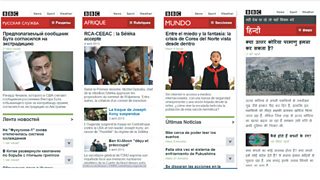 These sites are a balance of re-using what we already have and adding some new features. There are three new things delivered in this tranche of sites.

Firstly, we have handled some new scripts: Cyrillic for Russian, and Devanagari for Hindi.

Secondly, the Hindi site has the option of an 'image' version – you can see this link in the grey bar just under the BBC blocks logo at the top of the page.

Many phones do not cope well with Hindi scripts so for a number of years we have offered a version of the site with all the text turned into images. This is the first time that we have offered this functionality on the responsive sites and we will use it again for other Asian languages. 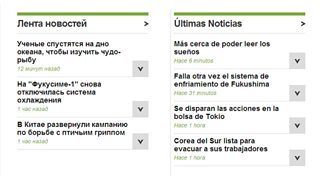 The new Rolling News module on Russian and Mundo

The biggest piece of new functionality we have developed is the 'Rolling News' module which is visible in Russian and Mundo.

This sort of module is not widely used in English-speaking markets but is common in other languages: for examples, you can see it on the Russian Kommersant and the Argentinian El Pais news sites. 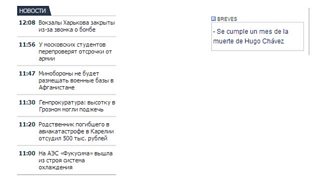 On the left, the Russian Newspaper Kommersant and on the right the Argentine El pais

This module is for mid-length, or 'fleeting' stories: longer than a tweet, but shorter than a full article and commonly without a picture.

Our old sites had a Rolling News module but our responsive solution is an advance on this: viewers with smartphones can now see these rolling stories without leaving the homepage, though there is still a page-per-story which can be addressed and shared. Again, this is a solution that can be re-used for other markets where appropriate. 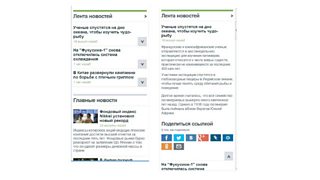 As more and more sites move into the Responsive News product we have begun to see how the characteristics of different languages push and pull the limits of the product. 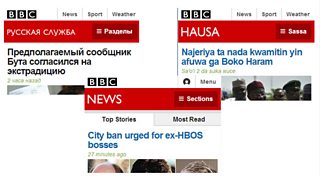 We can see that the brand name for Russian, Русская служба (Russkaya Sluzhba or Russian Service) is so much longer than the English 'News' that the masthead has had to be reduced in size quite radically.

Similarly, the summaries in Russian are very long, something which appears to be a natural feature of the Russian language - see again our competitors in Kommersant and Ria Novosti: 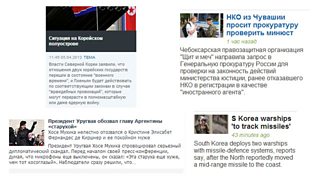 On the left, Kommersant and Ria Novosti have long summaries as does BBC Russian news top right. BBC English news bottom right is much shorter

These things arguably make for a reduced visual impact, at least in comparison with versions like English or Hausa. However, with very few exceptions – you know, things like catching bubonic plague or the early work of Lloyd Cole – there is very little which is entirely bad or entirely good in this world and putting up with these stylistic imperfections has allowed us to hugely increase the velocity of releasing the sites compared to making everything bespoke for every language.

Indeed, Mundo, the most popular of the World Service sites, took about three weeks to make: we had already built the Rolling News module for Russian so the only thing we had to do was get the news stories into the system and then configure the organisation of the homepage in association with the Mundo team.

This means that our audiences get a product much more quickly than they would do if we did large amounts of bespoke work and as I said in an earlier blog post, Responsive Design is an excellent match for World Service markets so getting the sites to market has real advantages.

Hausa, our most mobile market with over 1000 different models of mobile phones accessing the site every week, has seen double-digit growth in audience numbers since the site was relaunched in responsive design.

These figures have certainly been helped by the glorious victory of Nigeria's Super Eagles football team in this year's African Cup of Nations, but I believe that at least some of the growth can be put down to the site responding to the capabilities of the users mobile phone and giving them the best possible experience.

So: the number of World Service languages that now have responsive mobile sites has increased to six. Just 21 to go! As always, I would like to thank the team who have done all the work to make this possible and who are already working on the next tranche.

It's a vast effort to make a successful news website and the team working on these sites couldn't even have got started without the other News teams and journalists in each service making the content management system, manning the servers and so on – and I would like to take the opportunity to thank everyone who has contributed.

As I leave the BBC I hand over the continuing development of the World Service sites to my friend and colleague Peter Deslandes the executive product manager for News, and his team. In tandem with English language they will continue moving World Service sites to responsive while enhancing and developing its features. I will be following it with great interest and am looking forward to the day that all users are seeing this excellent product, no matter what language or device they are using.

Phil Buckley is the outgoing executive product manager for the World Service Websites.