BBC Connected Studio Nairobi Hack: Why the BBC needs to innovate outside of the UK

BBC’s global news services are reaching 265 million people every week on TV, radio and digital platforms. It’s a great number, without a doubt. Another great number is 500 million – the size of the international audience we are asked to reach by BBC’s centenary in 2022.

The majority of the growth will come from digital, and that the areas of rapid growth are going to be in the developing world, mainly in Africa and Asia. The proliferation of news sources, local, national, regional and international, together with the massive penetration of mobile devices and explosion of social platforms in these parts of the planet, means that competition for audiences’ attention has never been greater.

Ericsson forecasts that a number of mobile subscriptions in sub-Saharan Africa will rise from 635m in 2014 to 930mln in 2019. Mobile data traffic is expected to rise 20-fold between 2013 and 2019 – twice the average world rate. Smartphones at less than $50 are coming, where devices were $200 two years ago. The future is coming closer so fast that we need to be even faster to prepare for fundamental shifts in our relationship with the audience.

The BBC World Service - that has a diverse portfolio of news in 28 languages and a long and rich heritage of covering the globe - appreciates the challenge and knows that the task facing it is massive.

And this is where Connected Studio comes in, working alongside News Labs and the World Service as the BBC’s innovation and technical outreach arm, as this is an absolutely crucial area to focus on if the World Service is to achieve this massive target. It has been clear to us all along that in order to be successful from the technical point of view in markets we don’t necessarily know a lot about, we need to engage the local tech communities in order to develop our ideas, prove hunches and dispel technical myths. UK-facing solutions won’t necessarily work in Africa.

This is where the Connected Studio Africa hackathon idea came in, which got the local and international media interested.

Africa has a thriving tech scene, where lots of international companies engage with local startups to better understand the market. We picked Kenya as the place for the first ever non-UK BBC Connected Studio event as we thought that East Africa would give us a great opportunity to build from.

Firstly, we do a lot of content in English and Swahili; secondly, East Africa is in a different stage of technical development than, say, South Africa, and findings in Nairobi could be easily scaled to, or applied in West Africa or India, for example, and thirdly, Nairobi is the biggest BBC hub in Africa, so our own internal editorial and organisational infrastructure was there if we needed it.

The event itself went very smoothly. We partnered with a local tech centre called iHub, that helped bring the 13 teams together who took part in the event. Each team was given access to BBC content feeds, and BBC staff were on hand to help explain or clarify different aspects of contestants’ ideas. We also had audience representatives attending, so hackers were able to run their ideas and shape them with users who they were building for. The brief was simple but wide; how can you take BBC editorial content and package it in a way that will be engaging, exciting, interesting and relevant to younger Africans using social media and mobile phones?

The results exceeded our expectations. We have selected two teams to go to a pilot stage, with two others we’d like to continue talking to. I can’t go into details of what exactly is going to be built just yet, but I can’t wait to start. Our kick-off meetings are in early March and we are fully committed to actually ship something at the end of the process. We started the process with audiences’ needs in mind and we still hold those as the most important part of the puzzle.

We are learning all the time, and we are busy planning the next BBC hack event in Africa, which will take place in April in Cape Town, South Africa. We are iterating the approach we took in Nairobi, with the next event based upon mobiles and audio. BBC World Service has a wide variety of content mix, from the latest BBC Minute aimed at younger audiences to long form documentary series, like the latest Richer World season. We want to try and see how our audio content could be plugged into the lives of local communities.

Technical engagement with Africa is only one aspect of a wider plan to connect with African audiences better. January saw the launch of the Africa edition of the bbc.com front page, making the overall offer more relevant to local needs. More editorial innovation, both on bbc pages, but also on six social media platforms, including BBC Africa accounts on SoundCloud and Instagram, is going to come through in the Spring.

BBC’s digital commitment to Africa is strong, and we are there for the long term. 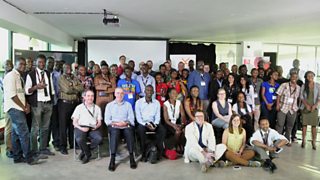 13 teams took part in Nairobi hack event, and we continue talking to four of them

How we built the BBC blogs v4 application: part one