I’m Nick Pinks and I work in the BBC’s Research and Development (R&D) division as a technology transfer manager.

Since the birth of radio in 1922, the BBC’s R&D team has played an important role in developing broadcast technologies and standards that change how content is produced, delivered and consumed.

Over the years our experimental work has created numerous products and services, some of which have had a direct impact on audiences, such as the first steps into digital with BBC Micro Computers and Ceefax, and others have benefitted the wider broadcast industry such as Piero, a TV graphics system that is in widespread use in sports broadcasting across the world. 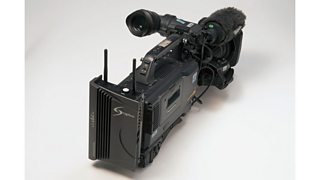 Stagebox attached to a camera

Today I want to tell you about our latest development, Stagebox, which falls into the latter category and has launched as a commercial product this morning at the National Association of Broadcasters event in Las Vegas.

Stagebox is a broadcast production device that attaches to the back of a camera, enabling programme makers to link multiple cameras and move HD content over standard Internet Protocol (IP) networks.

We feel this is significant because it’s the first truly standards-based product that allows the entire end-to-end production process to be put directly onto the internet.

Audiences are already accustomed to viewing content via IP, through BBC iPlayer, YouView and a host of different internet connected televisions and game consoles. Content can also be edited from a computer and sent via the internet (albeit private networks) to radio frequency transmission sites.

However, production is the last piece of the broadcast puzzle to move fully onto IP, connecting the cameras, microphones, feeds and talent directly to the editing process.

There are some clear and compelling benefits to IP production, as programme makers can stream professional quality footage to any gallery or post-production team with an internet connection in real-time, wherever they may be.

One Stagebox attached to a camera and connected to the Internet is all you would need to send a full broadcast spec HD feed direct to a remote gallery, removing the need for an expensive, temporary, local broadcast centre.

We also think IP production can help other types of programming to reduce cost, complexity and time-to-air.

Long-form productions, such as documentaries, also benefit, as post-production can take place at the same time as the filming is taking place instead of waiting to physically receive the footage. This is the case even when camera crews and post-production teams are on different continents to each other.

When Stagebox was a prototype my colleague Ant Miller wrote about how it combines all the various cables and feeds required for professional quality productions. This can substantially reduce rigging time for multi-camera productions as setting up is as simple as running a single Ethernet cable to each Stagebox-mounted camera

Those are some of the immediate benefits and there are also some exciting research areas for future applications that IP production can enable. For example, what if cameras captured so much more than a still frame once every 25th of a second? And what if we started capturing data sets, light fields, three dimensional information, and so much more?

These are questions that we can only begin to answer with IP production, allowing programme makers to explore how to tell stories in new ways which aren’t possible with current production technologies.

We’re extremely excited about launching Stagebox to the industry today and about what IP production can bring to broadcasters and content producers in the future. I’m keen to hear your thoughts in the comments below.

Nick Pinks is a technology transfer manager in BBC R&D.