BBC iPlayer comes to the Xbox One

As of today, BBC iPlayer is available on the Xbox One console. As announced, we have been working closely with Microsoft to bring our new version of iPlayer to this device and I am very excited for Xbox One users to get access to BBC iPlayer.

As Marcus Parnwell blogged in August, we have a standard HTML 5 based application that we are looking to roll-out across all platforms. Whilst we have had to make some device specific customisations (more on that below), we have been able to provide the same experience for Xbox One users as all other users of this new version of BBC iPlayer. This has a number of benefits:

- The look and feel is the same, so our users have a similar experience as other TVs, YouView, TV streamers (like Now TV) and on Blu-ray players.

- The ongoing maintenance is more streamlined and easier to manage.

- We can bring new features and channels (like BBC Radio 1) to the platform in an easier way.

Users who saw iPlayer running on the Xbox 360 and who use Kinect will know that we made use of voice and gesture in that version. 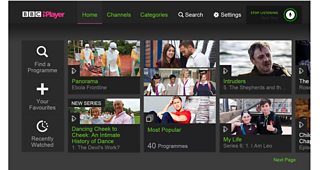 For the Xbox One we wanted to make use of the voice feature again but we wanted to add it to our standard product released earlier this year, but which wasn’t designed with Xbox specifically in mind.

This presented some key technical and design challenges that my colleagues Julia and Leanne outline in seperate posts.

Where do I get the iPlayer App?

Turn on your Xbox One console and make sure you’re signed in to Xbox Live. You don’t need an Xbox Live Gold Account for BBC iPlayer.

Search in the Xbox Store to find BBC iPlayer. When you have located this, you can install it by selecting the "Get it FREE” button.

For the full list of devices and features check out the ‘where to get BBC iPlayer’ site.

However we will have to take a different approach with them because the Xbox 360 doesn’t have a technical platform that would work with our standard product. We are working on upgrading the BBC iPlayer application on the Xbox 360 to enable the availability of content for 30 days and the ability to find new channel content from Radio 1 and S4C.

We hope to release this early in the new year.