How we built BBC Taster 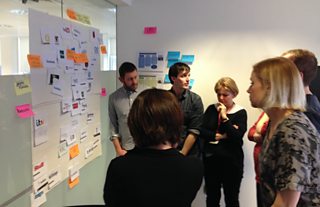 I’m Senior product manager for BBC Taster and Connected Studio. Adrian Woolard and Will Saunders announced the launch of BBC Taster last week, and I wanted to take the opportunity to tell you a bit more about how we made it.

From the outset the idea of Taster - an innovation platform or a place for the public to try ideas which might unfinished or be a bit rough round the edges - could potentially be a "hard sell" to the audience. We decided very early on Taster would be playful, positive and friendly, it should also feel different from the rest of BBC online. It will celebrate new things, it's not exclusively for techies,and we wanted to ensure it wouldn’t be intimidating for those not familiar with open development.

This ethos helped us shape not only the proposition but also the UX, the brand, the tone of voice and is also embeded into our teams attitude as well.

Working in truly multi-disciplined team of creatives, developers, researchers, producers, and marketers we all worked in parallel, so developing personas and user journeys, along side building a related content module, along slide naming workshops, along side building a interactive video for hip hop supremos Run the Jewels. The development team worked to an adapted agile framework called Kanban and adopting continuous delivery principles, we used tools such as Jira and Trello, doing live releases pretty much every day.

We created our first prototype really quickly, user tested it, and put it in the hands of anyone who would listen to buy ourselves more time, then repeated the process. I think we did this 4 times in total, developing and refining the product and features as we went and building momentum internally with every iteration, in October we got the final go ahead to launch, so the speed in which we delivered Taster was pretty incredible.

Our final iteration, was the most challanging and meant we moved from a prototype to an audience facing product, we started using the BBC’s existing tools and services. We swapped our light touch CMS for the much more robust and scalable iSite 2, moved into the BBC’s cloud, integrated the approved analytics.

One of the most difficult stages of the development was when we started to bring in the first batch of pilots, this is because the variety of Taster pilots is huge, so we need to be able to easily accommodate the various technologies we will be trialing, which include Interlude, Touchcast, Tumblr, Twitter, Wordpress as well as bespoke builds.

On Taster we actively encourage participation. We knew early on it was really important to not only show people our new ideas but give them an opportunity to tell us what they think of them, and we want to be having those conversations ourselves, not see them happening elselwhere.

Across social we have kept the same conversational attitude and playful nature which is at the heart of our strategy, and we won’t just be talking about our pilots, this is a space for us to share all kind of things which catch our eye.

This is only the very beginning for Taster, the responsive has been fantastic and we can’t wait to launch some of the pilot’s we know are coming up.

As a product team we are focused on taking the analytics to the next level and ensure they are being fed back into the organisation in the most effective way to inform decision making.

I hope you enjoy using it and come and try, rate and share our new ideas!