Since its launch six months ago, BBC Taster has been the home for new ideas from the BBC. Eleni Sharp, Senior Product Manager at Connected Studio and for BBC Taster, runs through the highlights and learnings so far along with news on how suppliers can become involved with future projects. BBC Taster was designed to be a space to be experimental with new formats, talent and technology. Our intention was that BBC Taster would be filled with ideas from all around the organisation and we wanted audiences to come and Try, Rate and Share our new projects.

We have now had over 50 ideas in BBC Taster from over 20 different teams across the BBC including Radio 1, BBC Three, Natural History Unit and iWonder.

We’ve seen a lot of experimentation with interactive video such as Story of Now featuring Idris Elba telling the history of the world from the beginning of time to now and How Safe are my Drugs, an investigative piece from Current Affairs featuring Radio 1 DJ BTraits, which looked at the tragic death of a young clubber in Manchester. We also recently launched Brain Crash, an interactive documentary about Callum who was left with memory loss after a near-fatal car accident.

New this month we have an interactive video with added gaming elements from the Natural History team called Anama, which we produced with AKQA. It’s iPad only at the moment, but we have a mobile version launching very soon.

We have been working with Research & Devlopment on cutting edge sound technology in a pilot called Unearthed as well as the ‘I am Smarter than’ quiz we developed alongside The Connected Set, in which you can play against celebs to find out if you know more about Music than Chris Stark, Made in Chealse than Jamie Laing, or Sport than Jordanne Whiley. 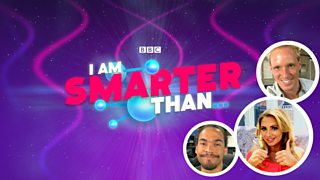 Interactive quiz 'I Am Smarter Than...' pits players against celebs

These are all fantastic pilots that show how teams are continuing to use BBC Taster in order to explore new technologies and content formats and are collaborating with indies on some of these experiences. We also have our first pilot that enables user generated content coming in the next couple of weeks, which has been produced by BBC iWonder. I’m so pleased to see them on BBC Taster and look forward to seeing how they perform with audiences.

Get your idea onto BBC Taster

We are now so excited to be in a position to be able to invite suppliers to get directly involved with BBC Taster through Connected Studio. We are interested in ideas which target younger audiences and put out a call this month for immersive proposals aimed at 16-24 year olds.

We are looking for ideas that use the latest immersive media formats and technologies such as virtual reality, binaural audio and emerging gaming technologies, where audiences become part of the story.

You can find the full brief and how to get involved here.

The platform and analytics

As part of us developing the Taster platform, we also developed an analytics dashboard alongside UK supplier Zizo.

It was important that we were not only trying out new technology and formats, but were also able to learn from them. Every pilot team has access to the dashboard which pulls in comscore data and the Taster API, as well as social data to help us really understand how audiences are using the ideas available in BBC Taster. This insight goes straight back into the BBC and means we are making informed decisions about what to spend time on and develop further. 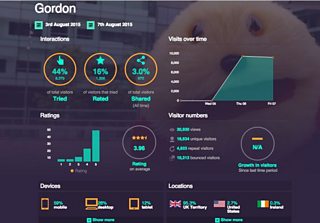 Analytics dashboard gives teams insights into how their ideas are performing

We have also been busy developing the core platform which was built on AWS and uses the BBC CMS called iSite. Since the launch we have made many data-driven changes to optimise how people use BBC Taster - for example we have been looking at increasing the level of participation as well as optimising the onward journeys and are currently working on a 'most popular' feature.

There are lots more collaborations and exciting projects planned, are we are looking forward to the next six months and beyond, so please continue to get involved and Try, Rate and Share our ideas.

'Taster things to come': The technical strategy behind BBC Taster