In 2006 when BBC iPlayer was still in embryonic form a new way of delivering content was commissioned by the BBC from Red Bee Media called the On Demand Production Service.

The service was ground breaking for 2006. It delivered 600 hours of Television programmes each week to BBC iPlayer. But seven years later iPlayer audiences have increased to over seven million per day on four screens and on over 1000 devices and platforms. The experiment in delivering video over the internet was proven to work, the demand was there but the infrastructure was aging and needed replacement.

So Monday the 30th of September was an important day for BBC Online. because it marked the end of the On Demand Production Service ODPS and the launch of Video Factory.

I’m Marina Kalkanis the head of the engineering teams that have built Video Factory. In this post blog I shall be telling you about how it’s built and how it will allow us to continue to improve the BBC iPlayer service.

This year the BBC will publish about 50 thousand hours of TV content and nearly 100,000 clips online on iPlayer, News, Sport, and on programme pages.

In 2013 we put content onto four platforms (PC, mobile, tablet and TV) and onto more than 1000 different devices.

Because BBC iPlayer has been a big huge success loads of people rely on BBC iPlayer to catchup on their favourite programmes. We get complaints when programmes take too long to become available. Live progammes are particularly challenging for us because we have to do all the online processing after the broadcast completes. This is even more challenging when many live programmes all broadcast at the same time. The 6:30 regional news bulletins are a perfect example of this. 16 live broadcasts that all end at the same time.

This usage pattern is ideally suited for delivery using elastic cloud computing so Video Factory has moved live processing into the cloud. Cloud computing is computing services sold on demand, on the internet, typically by the minute or the hour; it is elastic - a user can have as much or as little of a service as they want at any given time. This means we will have the flexibility to scale (up or down) and only pay for what we use.

Our live workflow is quite simple. We capture live broadcasts and send these to cloud storage where they get picked up by a transcode job and either sent to an idle transcoder or if the queue is full and all transcoders are busy, a newly started transcoder. Once transcoded the media either goes back to the cloud storage to be packaged on demand when a request from the internet comes in or it is pushed through to one of our other distribution services.

To get accurate start and end points for the live programmes Video Factory receives messages from the BBC playout systems giving the exact start and end frames for programmes in the TV broadcast. 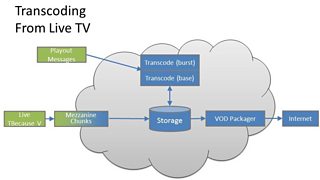 This diagram appears simple but behind the scenes there is a great deal of processing to capture the broadcast, make sure the right media is created for each type of device, that all the access service components like subtitles etc are produced and that the correct online rights are respected.

Video Factory is developed by engineers in BBC Future Media. We are working with leading providers of media transcoding and packaging. Our roadmap for Video Factory is packed with features. We are improving quality, increasing the amount of HD content, greatly expanding the online catalogue and the formats and getting live programmes available much more quickly.

Turning off ODPS has meant discontinuing some older workflows and formats. We have moved the transcoding and post-processing service off of MS Windows servers and as a result of this we will no longer be offering Windows Media video downloads.

We won’t only be renewing our TV workflow. We also have an Audio Factory project that is getting underway. We have similar plans being laid to completely refresh the systems we use for publishing Radio programmes online. The BBC publishes more than 50 radio stations online, both live and as catchup and many of the benefits of a new TV publishing system also apply to Radio.

Some of my colleagues on the Video Factory team will be blogging soon with much more detail about how we built and system and how it operates. In the meantime I’d welcome your questions and feedback.