As Head of Business Development for the BBC’s Digital division, one of my areas of focus is looking at how we can innovate by using new and emerging technologies and working with third parties to explore what kinds of new audience experiences might be possible in the future.

For our latest project, we took a simple low cost brainwave reading headset and, working with UK based user experience studio This Place, created a ‘Mind Control TV’ prototype. It allows users to open an experimental version of BBC iPlayer and select a TV programme to view, using nothing but their brainwaves.

It’s an internal prototype designed to give our programme makers, technologists and other users an idea of how this technology might be used in the future. Here’s some footage of staff trying it out for the first time and an explanation of how it works:

So does it work? In a word, yes. Our first trial run saw 10 BBC staff members try out the app, and all were able to launch BBC iPlayer and start viewing a programme simply by using their minds. It was much easier for some than it was for others, but they all managed to get it to work. And it’s been a similar story for everyone who’s tried it out in our BBC technology Blue Room since.

A subject popular in works of fiction is the ability to control things just by using your mind. The idea of being able to simply think about something and then magically make it happen has fascinated people for many years. Whether it’s using ‘the Force’ in Star Wars, spoon bending on stage or The Matrix, controlling objects simply with your brain has a unique appeal and could open up a whole world of possibilities.

So when we learnt that new technologies were now available in the market that allowed you to control electronic devices by measuring the brain’s electrical activity, we wanted to experiment with the technology to see what types of audience experiences this might result in.

There were two areas that immediately stood out for us: improving accessibility and the potential of a new user interface.

Our Research and Development team has carried out research into accessibility and new user interfaces, looking at how we might be able to help users with a broad range of disabilities who cannot easily use traditional TV remote controls or other conventional interfaces. Work has ranged from encouraging the development of industry standards that make the creation of more accessible user interfaces more likely, to work on specific prototype projects such as single button interfaces and head-mouse controllers.

An important potential benefit that brainwave technology might offer is the ability to improve the accessibility of media content to people with disabilities. For example, people affected by motor-neurone disease or suffering locked-in-syndrome may increasingly be able to use brain-computer interfaces to get a better experience of digital and media services than they currently do, potentially opening up the online world of information and experiences that the rest of us now take for granted. 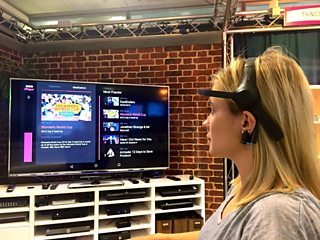 Our experimental interface in action

The BBC is always looking at ways of using technology to satisfy people’s increasing desire to get to the digital content that they want as quickly and easily as possible – such as using voice-control with BBC iPlayer on Xbox One.

Mind control technology could be another, more advanced, way of doing this. You can imagine a world where instead of having to get up from your sofa or reach for your remote, you just think ‘put BBC One on’ when you want to watch TV. Imagine sitting in your car and thinking ‘I want to listen to Radio 4’ and hearing the radio station come on during your commute to work. Perhaps you might be able to just think ‘give me the latest news’ and in response get served up a personalised set of news headlines.

It’s important to stress that it’s very early days and, while brainwave reading devices are constantly improving, their capabilities are still quite basic - the outputs on our very experimental app were limited to simple binary ‘on’ / ‘off’ instructions, for example.

Our proof-of-concept is only an experiment and just a toe in the water, but it helps our initial understanding of how we might be able to control devices using our brainwaves in the years to come.

The technology behind the experiment

The electroencephalography (EEG) brainwave reading headset has one small sensor that rests on a user’s forehead and another on a clip that attaches to the ear.

Once a certain threshold of concentration has been reached, a message is sent to the tablet to perform an action – in this case, to initially launch BBC iPlayer. 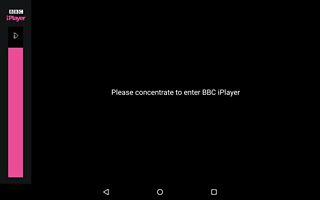 Once a user launches BBC iPlayer, they are presented with five of the most popular programmes on at that point in time. 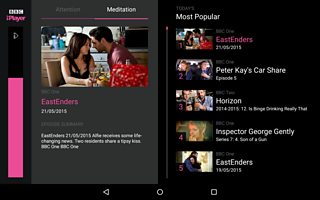 A screen shot of the experimental app: ‘meditate’ to open one of the programmes

In BBC Digital’s Distribution & Business Development team, we are always looking out for ways to deliver new types of content to our audiences in new ways – if you have any innovation ideas that you think our audiences could potentially benefit from, do get in touch in the comments section below or contact me on Twitter @cyrussaihan.