You may have noticed that Google launched a new device in the UK today called Chromecast. I've been working with the team that has added support for this platform to BBC iPlayer and I wanted to tell you a little a bit about it and what we have planned. 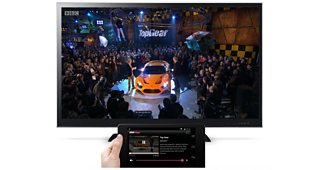 Chromecast is an HDMI dongle that you plug into your TV. It has a Wi-Fi chip built into it, not much memory, and can run simple web apps and stream media.

It allows you to find content on your mobile phone or tablet and play that content on your TV. In a way, it is similar to what you can do right now with BBC iPlayer using a technology called AirPlay if you have an iPhone or an iPad, and an Apple TV.

The BBC iPlayer app, in the case of these technologies, works not by physically streaming the content from your mobile to your TV, but by sending a message from your mobile to, for example, the Chromecast dongle to tell it to request a piece of content directly from a BBC server and play it on your TV. From this point on, the Chromecast dongle does all the heavy lifting of decoding and playing the video stream. Your mobile device works more like a remote control and just sends and receives messages from the Chromecast about what is playing. This is much easier on your device's battery and much more efficient in terms of the number of bytes zipping back and forth across your network. 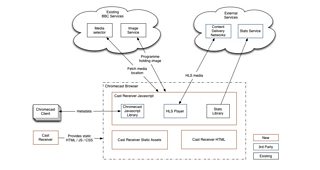 How Chromecast links up with BBC iPlayer and other services

One of the reasons we decided to support Chromecast was that Apple TV currently works only with Apple devices. Chromecast has SDKs available for a number of different platforms including iOS, Android, and the Chrome browser for laptop and desktop computers. Today we've added support to the latest versions of both the Android and iOS versions of BBC iPlayer. Soon, we will also be adding support for the Chrome web browser on Mac, Windows, Linux, and Chrome OS desktop and laptop computers for the new web version of iPlayer.

By the way, one platform that Chromecast cannot currently support is the Amazon Kindle. This is because some of the key libraries needed to support Chromecast on Android are included as part of Google Play Services. These are not part of the Kindle OS (which is built on top of Android, but is not exactly the same as Android). We recognize that the Kindle is an important device for BBC iPlayer in terms of usage and we have, on behalf of our users, asked Google to do what they can to support this platform.

One benefit of having Chromecast manage the video streams playing on the television is that we can provide bitrates and video profiles that are more suitable for a big screen than a small screen. We constantly re-evaluate our video and device profiles in the BBC and may change these profiles in the future, but these are what we're using today for our on-demand content:

We start playback at 1500 kbps and switch up or down based on how well the network can handle the stream. This happens continuously while the stream is playing. All of this should be invisible to the user but should mean the stream starts quickly, plays at the best quality possible, and buffers only when network conditions are truly dire.

One capability that won't be there at launch is the ability to play audio-only streams, such as BBC radio programmes. This is something we will be working on in the future.

Chromecast is a new technology. As with all new technology, there are bound to be things we don't get quite right at first or weren't able to fit in in time for launch. We're already planning the next release of BBC iPlayer with Chromecast. One of the things I'm very keen to get right is to make sure we take full advantage of the accessibility features that the Android and iOS platforms afford us. This is something the team is working on right now and you can expect to see this greatly improved in the next few weeks.

This will mean that users who have difficulty interacting with or reading television EPGs (Electronic Program Guides) or remote controls should be able to use the familiar interfaces on their mobile devices to interact with content on their television.

I've already mentioned that the BBC will be enabling Chromecast support for the Chrome web browser on Mac, Windows, Linux, and ChromeOS desktop and laptop computers for the new web version of BBC iPlayer, and that we will be looking at adding support for audio-only streams. Aside from this and making tweaks and improvements to the existing BBC iPlayer application, we will also be working with other development teams in the BBC to add Chromecast support to other apps like the BBC Sport app.

We will also continue to keep an eye on other similar technologies. There is a lot of activity in this space and some of the more interesting possibilities aren't just about moving simple video playback from one screen to another but are more about experiences that stretch across multiple screens.

I’d love to hear what you think about this new technology and we hope that it works well for you.