As Executive Product Manager for BBC Future Media I've led the Red Button and Connected TV services for the Olympics. The Red Button service has reached a huge audience and I wanted to share some of the thinking that went into it.

Up to 24 simultaneous live events were available to satellite and cable homes via Red Button , with Freeview homes getting up to two extra channels in SD, and one in HD. Over twenty four million people (42% of the UK population) watched at least 15 minutes of coverage on the BBC Red Button, which is a fantastic uptake. The reaction in the press and on Twitter has been hugely positive - thanks to everyone for their thoughts and feedback. 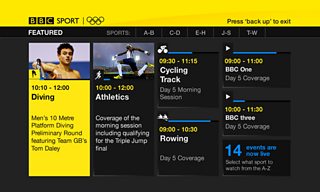 The home page of the service on Sky and Freesat presented an overview of the most exciting events at that moment in time, using text and still images.

Though BBC Sport has had a Red Button video service for some years now, we needed a new interface for these Olympics.

The existing service carries six channels, but we needed to carry up to 24, via an interface that viewers would understand instantly.

Even though the 24 channels are available on the Sky, Freesat and Virgin Media programme guides as well as via Red Button, Red Button is the main access point for most people.

The Red Button app had to be an easy-to-use tool for those people - and add enough value that people would choose to use it even though the channels were available elsewhere. We also wanted to put HD video at the heart of Red Button - something we've never done before.

We focussed on two tasks - help viewers find something to watch now, and help them decide what to watch later.

We rejected other features - such as a full schedule, or news stories - that would have added complexity. During the Olympics there is live video for approximately 16 hours each day, so we focused on the one thing viewers would really want to do - watch it.

The schedule data had to be accurate 100% of the time.

In the past, Red Button applications have had a bespoke production process, separate to that used for BBC Online. Given the complexity of 24 live events, that approach would have led to inefficiency and errors.

On this occasion exactly the same content was going out online and on TV, so we were able to share production tools across both services, and drive the application from the same data services as online (blog post by Oliver Bartlett). This means time and schedule information is created once by BBC Sport staff, and updated simultaneously across Red Button, online, mobile and Connected TV. This saves money and ensures complexity is kept to a minimum.

On all platforms viewers could access an a-z of all sports, which gave an overview of everything that was covered live that day.

We worked closely with our satellite and cable partners throughout to make the application as responsive as possible, and adapt the design to the capabilities of each platform.

For example, Sky and Freesat boxes were able to display still images, so we could incorporate these into the application.

This was not possible on Virgin Media, but we were able to have a quarter-screen view of each channel available as a preview, so we incorporated this into the application.

You can see the similarities and differences in the applications from the images below.

In addition, we took advantage of HD technology to present HD video streams where the viewer's set-top box supported them - this meant HD was made available seamlessly, and the viewer did not have to press a button to select it. 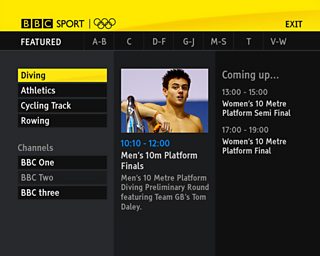 The Red Button homepage in Virgin Media homes used a mini-video window to showcase the best live events, due to the different capabilities of the cable platform.

Finally, we wanted to ensure that the Red Button service looked like our other Olympics products.

My colleague Nick Haley has previously blogged about the design thinking across 2012. This work was established when we started building Red Button, so there were design elements ready for us to adopt - in particular, the use of blue to represent live, the use of timelines to represent how much of an event had elapsed, and the use of Olympic pictograms. We hope this made it easier for users to adapt quickly to our products as they move from device to device to follow the Games. 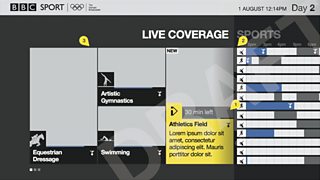 Early designs for Red Button were based on our Connected TV app, and needed to be simplified to ensure ease-of-use and responsiveness.

We've also had feedback from users with accessibility issues - in particular, those with poor eyesight - that the application has proven easy to use for them, which we are delighted about.

The project team is overwhelmed by the reaction this application has had and we hope it enhanced your experience of the Games.

Update: "Connected TV" removed from title 17:04 Aug 04. Aaron has blogged about BBC Sport on Connected TV in a previous post.

BBC News on mobile: now with local news and weather