It was all part of the BBC’s School Report News Day that involves 30,000 school children and 900 schools around the country. Around 130 students and 30 teaching staff from schools across the north came into Media City for workshops to enhance their digital and journalistic skills.

The D+E team collaborated with the BBC Academy to run a series of workshops that ended with the youngsters taking their own photographs around the Salford base and then publishing them on to the BBC’s creativity platform Mixital. 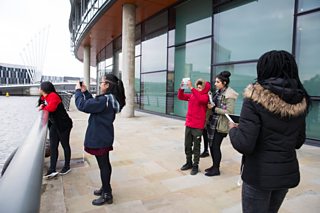 The theme of the day was accuracy and authenticity in news reporting – two values that are crucial to the BBC. The purpose of the workshop was how to apply the same values to tell stories accurately and fairly with photos.

At the end of the workshops the youngsters were set the challenge of gathering their own photos around Media City to tell a story of urban regeneration. Back in the newsroom, the youngsters edited their photos, selected the best and wrote captions. They then published them on Mixital and you can see them here.