Voice + AI: View from the Netherlands 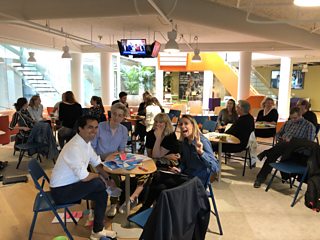 Last week, a few of us from the BBC Voice + AI team joined up with voice innovation teams from across Holland’s media organisations, public and private.

Organised by Conversationals and hosted by KRO-NCRV, the day started with presentations from four broadcasters, each sharing our journey so far with voice.

In the afternoon we ran a creative session looking into the future of voice interaction beyond the current generation of smart speakers.
It was great to share experiences and identify shared challenges.

Looking at the BBC's role in data-led services