Virtual reality: the future of TV?

Some audience reactions to our virtual reality experiment

As Head of Business Development in BBC Future Media, I manage partnerships with large digital technology companies and look at how we can work with companies and new technologies to deliver new experiences to audiences.

The pace of change in digital media is astounding – when the BBC started making the world’s first regular public television broadcasts in 1936, there were only about 20,000 TV sets capable of receiving the programming – today, more than 20,000 smartphones will be sold around the world in the next 10 minutes.

At the BBC, we have been at the cutting edge of media technology since 1922 (colour TV was considered a new hi-tech platform of the future when it first came out) and we are always looking for ways to create new types of content and deliver it in new ways.

One area that I am particularly interested in is ‘immersive’ experiences – that is making you feel not simply that you are watching or listening to a programme or story, but that you are fully immersed in it, part of it and there in person. The BBC's R&D department have been looking at this from a sound perspective, creating cinema style surround sound with a standard set of headphones and we have recently been testing out some immersive experiences with video as well, looking at virtual reality. 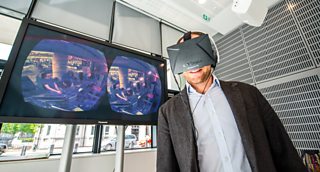 A member of the public virtually standing next to a live edit of the news.

With Facebook’s $2bn purchase of Oculus Rift some big bets are now being made on the future of virtual reality. We have started to test out its potential and working with a small production team in London called Visualise, have done a few basic pilots.

One of the experiments that we did was around our news operation in London. Using a 360 degree camera set up, we filmed our newsroom, live editing gallery and Fiona Bruce in the studio – we then ‘stitched’ together the various images to create a virtual reality experience that could be viewed on an Oculus Rift device. 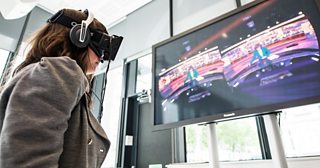 My colleague Jessica trying out the device

It is hard to describe what it is like to wear an Oculus Rift, but once you put it on, it feels as if you have been transported to a different place.

The purpose of this trial was to test out the technology and see if we could make our users feel as if they were actually there in person, part of a programme and able to experience what it feels like to be behind the scenes during a news broadcast, in the studio sitting in front of a newsreader whilst they are on-air and in the centre of our bustling London newsroom.

Have a look at the video at the top of this post to get more of an idea and to see what some members of the public thought about the experience when they tested out our newsroom experiment.

If you have an Oculus Rift developer kit, you can download the experience yourself on a MAC or on a PC. Try it out and let us know what you think.

Have a look at the video at the top of this post to get more of an idea and to see what some members of the public thought about the experience when they tested out our newsroom experiment. 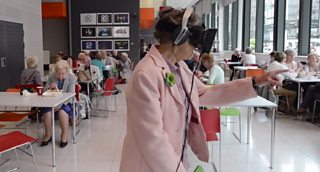 A member of the public trying out the device

It is very early days for this type of technology (we were using an Oculus Rift developer device as their consumer device has not been released as yet), but virtual reality has the potential to be the next generation platform. We are trialling out this type of immersive experience in other areas and I’ll post again when I have more to share on that.