Hi, I am the product manager for blogs, comments, Tweet modules, moderation and message boards at the BBC.

We’ve recently launched a new feature which internally we’re calling ‘live blogging’ and I wanted to tell you a bit about this.

The primary purpose of live blogging is to allow BBC editorial teams to tell the evolving story of a live event or programme in real-time, using a blend of text, images, video and audio to give extra context for audiences. 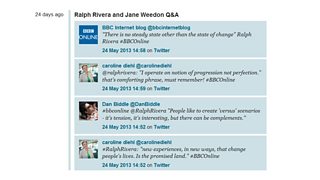 As a concept this builds on the great experience we've generated across the BBC. Live text services have been successfully used by News and Sport for a few years now, running the Sportsday Live page  for example and similar ideas were adapted for specific programmes and music events such as Glastonbury 2011.

However, it was clear that there was a distinct need for BBC editorial staff (initially those working in television and radio) to have a simple way to bring together internal, external and UGC content in an intuitive way.

Numerous tools have been used by the various teams in the past but each has had long-term costs and none have fully supported the changing needs of the BBC, so we started looking for a way to meet the requirements.

When we first came up with the live blogging concept we developed and user tested a prototype which showed that there was a keen appetite for this type of content and gave us some useful insights into how it should look and behave.

The next step was to look at what already exists and how we could adapt this to deliver the required functionality most efficiently.  The front end of live blogging is an extension of our existing tweet module (an example of which you can see on the right of this blog post), but displays content from multiple sources.

The live blog itself is made up of a number of posts and each of these is denoted by a title which displays alongside an associated time stamp (showing how long ago this content was added relative to now). The post can be made up of a single content element (such as an image) or several different elements as the editor finds appropriate.

Following extensive discussions with staff about their requirements and an investigation into the existing tools used by the BBC we concluded that we didn’t need to build the editorial tool itself, at least for now, and we selected the Storify platform as the most suitable for our current needs.

A key attraction of this tool was how intuitive the user interface is for our editorial team, who want to focus on the content, without being hampered by a complex tool. Once the user has identified desirable content (such as a Tweet or article) they simply drag and drop it into the story; this can be supplemented with editorial commentary which they create themselves.

We are pleased with the feedback from the editorial teams about their experiences with this and how they are now using it more and more.

Where this is used

Some examples of live blogging include 6 Music’s 100 Greatest Hits  in February which counted down the top 100 hits compiled by the team and asked the audience to vote for the greatest song released in 6Music’s lifetime.

127,000 unique browsers visited this page which was around half the number found to be listening live via the radio console (although these may or may not be the same people doing both!).

All in all, across Comic Relief there were 120,000 Unique Browsers visiting at least one of these live blogs between 12th and 18th of March. To put these figures in perspective this is around a third of those who visited the Comic Relief homepage in the same timeframe.

You can also see an example of an Eastenders live blog for a Question and Answer session with Jake Wood (who plays Max Branning in the programme); this shows one of the features we’ve introduced which utilises comments functionality and allows signed-in users to submit their thoughts and contributions without leaving the page.  These are then seen by the editor who can choose to include them in the live blog.

We’ve also completed a feature which will be used to promote a live blog on other BBC Online pages with several customisation options.

The idea is to ensure that there’s a sense of liveness when a live blog is being updated so it shows the four latest headlines from that live blog which rotate every few seconds.

Additionally, there is an option to include an image, and the title and description are fully customisable.

Currently we’re doing some work to offer a version of the module which is more flexible. The main live blogging module stretches the full length of a page where this new version would adapt to the height of a defined container so it could easily fit alongside other media. This is an example of what the module could look like: 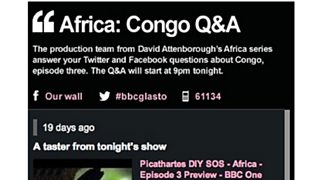 
Above is an example showing how the flexible module might look if it were used by the Africa series for a Question and Answer session.

In this format the module is much narrower than the standard version and therefore requires slight differences in presentation (timestamps sit above the post titles rather than next to these for example).

Following this we’ll start looking at what the live blog should look like when it’s no longer being updated. Currently content displays in order of most recent first and the relative timestamps continue to update indefinitely; this can start to be confusing from the next day when each timestamp reads ‘1 day ago’.

We’re also looking at where other parts of the BBC are delivering a similar experience to live blogging in slightly different ways; we’re currently working together to ensure consistency and avoid duplication.

In mid-late 2013 we’ll also be integrating an Api which will enable us to bring this experience to other devices such as television and mobile applications, so extending the red button and companion scenarios.

Live blogging is still evolving and as such I’d love to hear your feedback and any ideas you might have for improvements; please leave your comments below.