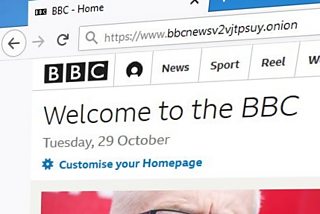 The BBC homepage, with a URL accessed through the Tor network.

The decision to go ahead with setting this service up came at a time when BBC News is either blocked or restricted in several parts of the world.

For example, in Egypt, Iran and China, our audiences are finding it either impossible or difficult to access our content without the use of a circumvention tool, such as a VPN.

The Tor network is an overlay network on the internet, which provides increased security and is resistant to blocking.

The BBC is not the first leading organisation to have a direct presence on the Tor network. Facebook has been there since 2014; the implementation of the social media platform on the network was built by Facebook engineer Alec Muffett, who later left Facebook and subsequently assisted the New York Times in setting up their own Tor site.

As a result of his experiences, Alec created the Enterprise Onion Toolkit (EOTK), which makes it easier for any organisation to set themselves up on the Tor Network.

With help from the BBC Online Technology Group, Alec prototyped a solution based on the EOTK for the BBC World Service. The BBC has an unusually complex domain name configuration, and the prototype proved that the EOTK could handle this complexity well.

The implementation for the BBC was carried out by the Open Technology Fund (OTF) and Alec continues to be a key contributor. The OTF is one of the leading Internet freedom organisations in the world, who have found prominence through funding and vetting numerous information security and internet freedom projects.

Why an Onion service?

From a technical standpoint, the Tor network is a subset of the internet we know and use every day, and is accessed by users using a modified browser. The key feature of the Tor network is that it is fully encrypted. That’s to say, it hides the location of users, and the protocol it uses is continuously updated to maintain resistance to blocking.

This explains why it is a strong solution for the problem of internet censorship and secure communications and why it is being used by a large number of journalists, bloggers and internet users who live in muzzled media environments.

Users can already access the BBC (for example https://bbc.com/persian) on the Tor Browser to circumvent blocking. The user’s connection enters the Tor Network in one country, runs through at least three servers, then exits the Tor Network to the BBC website from another country. While successful in circumventing blocking, this route is exposed to censors who might monitor activity on the last exit server, which is unencrypted, or even tamper with it.

An alternative, called an Onion service, uses the Tor Network’s own address scheme where domain names end with “.onion”. In this case, traffic is directed to a dedicated node on the Tor Network for that service.

This allows the traffic between the Tor Network and the content provider to travel a trustworthy path. This also removes the risk associated with exit nodes.

An additional benefit is that the routing within the Tor Network is simplified when using an Onion service. This provides a much higher performance, which is especially noticeable when watching video.

The Tor Browser is available for Windows, MacBook and Linux computers, as well as Android phones. Alternative browsers, such as Brave or the Onion Browser (for iPhones) can also be used. These browsers can be used for both .onion and classic URLs.

Is there different BBC content on the Tor network?

The BBC content on the Tor network is not different from that which is accessible to our international audiences under normal conditions.

The experience is similar to being in Ireland or the East Coast in the USA for example. Users will be able to access World Service radio, TV and websites in over 40 languages, as well as the news in English.

An aspect of setting up an Onion service for the BBC was the question of whether technical BBC assets will be placed on the Tor Network or whether the Onion service needs to be technically trusted by the BBC in any way.

Onion services are https-based and therefore do require their own server certificates and the certificate for the BBC Onion domain is separate from other BBC certificates. This allows users to trust that they are actually reaching BBC content.

The Onion service has to rewrite all of the URLs in order to make the BBC site work inside the Tor Network. It is therefore essential that the Onion service is operated securely and by a trusted team.

The work done by the EOTK platform does not involve placing any BBC assets on the Tor network itself. Neither does it need to be provisioned with any passwords or certificates to access BBC systems. To the BBC, it appears like a normal group of international users.

Content on the Tor network is therefore proxied through the Onion service and there is no additional web hosting commitment.

The BBC's duty of care

Some countries, such as Russia, China and the UAE, have passed laws to regulate the sale and distribution of tools such as VPNs.

The promotion of the Onion site by the different BBC services will include clear warnings that users should be aware of their legal environments and should not use it if it might put them or those close to them under any risk or danger.

Information controls then and now

Controls placed by governments on access to information and trusted news are not new at all.

During the Cold War, some governments used to jam the shortwave radio broadcasts of the BBC World Service to stop their populations from listening to BBC. Then, the BBC circumvented these measures by providing new frequencies or changing frequency values to confuse jammers.

These controls are now moving on to the internet. At a time when internet freedom has been declining consistently and online information controls are growing, the BBC World Service continues to pursue its mission by providing an additional online news presence on the Tor Network.

The BBC News Onion site can be accessed at https://www.bbcnewsd73hkzno2ini43t4gblxvycyac5aw4gnv7t2rccijh7745uqd.onion (Link updated October 2021)