I'm Dave Price head of iPlayer here at the BBC.

Christmas is always a highlight of the TV calendar. If you're anything like my family, after a long Christmas dinner and a busy day unwrapping presents we gather around the telly watching the celebs on Strictly or the drama from Albert Square.

Christmas Day is also a particularly special day for my team as it's BBC iPlayer's birthday. Five years ago we unwrapped iPlayer on the PC. Fast forward five years and it's the number one brand in the UK, and now on over 650 devices and platforms ranging from TV platforms and games consoles, to mobiles and tablets. In October we broke the 200 million-requests-per-month mark for the first time. 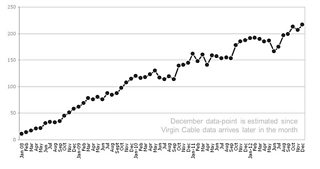 Christmas is a popular time of year for iPlayer. And with so many new gadgets given as gifts this year many of you downloaded the iPlayer app to watch and catch-up on the programmes you've missed.

On Christmas Day itself most viewing is via broadcast TV with families flocking around the best screen in the house. It's the days afterwards, especially Boxing Day and New Year's Day, when requests on iPlayer really start to peak - when many of you are catching up on those essential Christmas programmes.

During the festive season last year Monday 2 January was the best day BBC iPlayer ever had with 5.4 million TV programmes requested. This year Tuesday 1 January (New Year's Day) was the most popular for TV viewing with 6.7 million request for TV programmes. 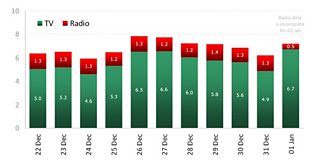 This year we saw 77 million requests for TV and Radio programmes throughout the festive period (22 Dec - 1 Jan, excluding Virgin Cable data which is not yet available).

Throughout this period:
. The most popular day in terms of TV programme requests was New Year's Day.
. Doctor Who - The Snowmen was the most popular programme, followed by Eastenders and Miranda. Other top performing programmes were Outnumbered, Call the Midwife and Merlin(see table below for the top 20). 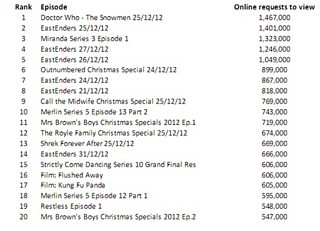 BBC iPlayer - whenever and wherever you want it

As I've talked about before one of our key goals for iPlayer in 2012 was to take it beyond the PC and onto a host of different devices from mobile smartphones and tablets to smart TVs and games consoles. We want to make it as easy as possible to watch and catch up on your favourite programmes.

It appears the UK was particularly generous with gifts this Christmas! We've witnessed a significant spike in users installing iPlayer on new tablets and smartphones with devices such as the Nexus 7, iPad and Kindle Fire HD proving popular.

Throughout the festive period we saw more and more viewers accessing programmes on mobiles, tablets and internet-connected TVs.

Please note: all the following data is for TV only, for a fair comparison across devices, some of which are not primarily used for radio listening.

On mobiles and tablets:
. Requests increased on Christmas Day +40% on tablets and +66% on mobiles compared with Christmas Eve. Mobile and tablet viewing requests grew even further on Boxing Day and saw another catch-up viewing peak on New Year's Day.
. During the whole festive period the iPlayer app was downloaded nearly one million times - with almost 300,000 downloads on Christmas Day alone.
. By the end of 2012 the iPlayer app had been downloaded nearly 13 million times.

But people still want to watch TV on a TV and with increasing numbers of TVs being connected to the internet iPlayer requests were also strong on these devices throughout this period.

On internet connected TVs (such as smart TVs, games consoles and TV platforms):
. These devices followed the overall pattern of viewing on PCs, since they saw stiff competition from live TV screens - dipping on Christmas Eve and Christmas Day and picking up for catch-up viewing from 27 onwards. Requests from PCs saw their largest peak on New Year's Day.
. Most popular programmes were in line with the overall trend - Doctor Who, Miranda and EastEnders - with family films and comedy also very popular. 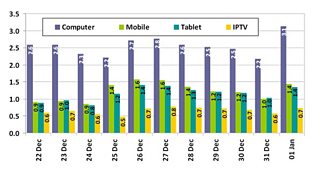 I hope you've had a great Christmas and are looking forward to the year ahead.
We've got lots of exciting plans to make iPlayer even better and look forward to sharing them with you in the months to come.

As always, it's great to hear your feedback, so please leave a comment below. Have a great 2013.