CBeebies Playtime is an app for the BBC’s youngest audience of 0-6 year olds. Available on Apple iTunes, Google Play, Amazon and Windows 8 app stores since August 2013, the app has been downloaded nearly 2 million times in under 6 months.

The Playtime app is filled with lots of CBeebies favourites, fun features and great games designed to aid child development, allowing children to learn whilst they play, in a safe and secure environment.

To keep little ones entertained, the CBeebies Playtime app has seen two new exciting additions since its launch last year; and I am very pleased to announce that things are about to get prehistoric, with the third new arrival Andy’s Dinosaur Adventure game!

Children can travel back in time and join Andy on a dinosaur adventure; take care of their very own dinosaur, find out what food it likes to eat and help Andy feed it, teach it to ROAR, personalise it by changing its colour or even take it’s photograph to keep and share with their family and friends. 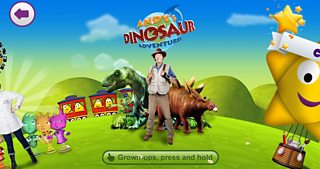 The fun doesn’t stop there! We asked our audiences ‘What would be the best thing you could do with a Dinosaur?’ and we had some brilliant answers ranging from ‘go to my Nana’s with it’, ‘show a dinosaur a clock so they know the time’ and ‘go to the supermarket with it’, but one of the best answers helped inform part of our Andy’s Dinosaur Adventure game - ‘Ride it!’. With the CBeebies Playtime app, little ones and even big kids too, can ride on their very own Dinosaur. By moving their device around they can also collect photographs of other dinosaurs they see along the way for Andy to take back to his friend Hatty at the National History Museum.

Andy’s Dinosaur Adventure game also allows children to use Andy’s iconic ‘Gizmo’ to learn interesting things and fun facts you didn’t know about dinosaurs; how big they were, how much they weighed and lots more! 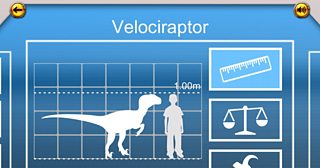 We hope little ones will enjoy this game as much as we enjoyed making it for them.

‘Shiver me timbers’ – there’s more! Make a Picture has been treated to a ‘Piratey - Swashbuckle’ make-over in this latest update, which means children can have fun creating swashbuckling artwork with pirate stickers and frame it all with a buccaneer theme! 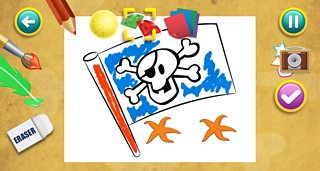 • The ‘Make a Picture’ game was added to CBeebies Playtime in Nov 2013. Designed to inspire imagination and creative play, this has been one of the most popular games in the app with over 4.5 million plays.

• ‘Nina and the Neurons Earth Explorers’ a strategy game that lets children explore our Planet and the Solar System, was added just before Christmas in Dec 2013 and has also proven very popular receiving over 3.4 million plays since launch.

• A constant favourite with our young audience is the Something Special, Paint Pop game with 4.6 million plays in the last 3 months alone.

CBeebies Playtime has been played over 22 million times at an average of nine minutes each time over the last three months. That’s over 198 million minutes of CBeebies Playtime enjoyed by little ones across the UK, giving us lots of valuable feedback and insights into what our audience like and how they use the app.

We know that tablets are becoming more and more popular amongst families with small children. Between launch and Christmas day on average 56% of children used the App on a tablet compared to 44% on mobile.  However it seems that Santa must have been extremely generous as that jumped up to 62% tablet - 38% mobile after Christmas day.

Many of you Grown-Ups have told us what you and your little ones love about the app, what their favourite game is and what you’d like more of. We are always interested in your suggestions and ideas and we have some more exiting updates coming for you soon in 2014, including new words for Alphablocks!

Connected Studio: how we made The Inventors

College of Production Round Up: Internet radio and Google+