Now though, our TVs are much smarter than they were then, and in fact the last couple of years have seen connected TVs become the most popular way of accessing BBC iPlayer. Because of this we’re expanding the live restart feature to work from the green button on your remote control, helping to make sure that you’re never late for a BBC programme again.

Whilst this feature is already available via Red Button+ and the BBC iPlayer app, we felt that it could be given more prominence by providing it where the audience needs it most: when they change channels. And we have made this as seamless as possible through the press of one button, the green colour button on the remote control.

When asked, users who hadn’t used our connected services before were delighted when we showed them the feature and said that it would be a key driver for using BBC iPlayer on their TV.

We found that our audiences tend to restart a programme at different times of the day and for different programmes, but the peaks were usually a few minutes into a programme. We also found that usage increases when we hit a so-called ‘schedule conflict’ - in other words where programmes don’t end at the traditional on-the-hour or half-past-the-hour junctures.

For example when the Great British Bake Off finished on Channel 4 and Doctor Foster on BBC One had started 15 minutes ago - we saw a huge peak in our audience launching BBC iPlayer to restart it. So with this knowledge we decided to display the trigger when the user turns to the BBC channel. That way we display the trigger when the user is most likely to need to restart. After 30 seconds the trigger clears from the screen, but the viewer can press green at any point whilst on the channel.

This feature works for Smart TVs that are connected to the internet and devices that can ‘seek’ to the start. We’ve built a ‘smart’ trigger that will only display if the device is capable of supporting the functionality. This covers many LG, Panasonic, Sony, Samsung, Vestel, Phillips, Hisense TVs along with Humax and Netgem set top boxes. 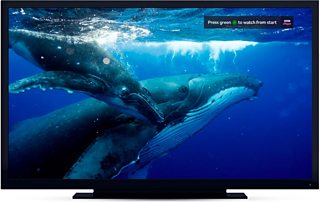 Whilst on the surface this is a simple and straightforward feature, under the hood we’ve had to contend with considerable complexity. Working at the BBC always means you’re building to scale and I love that about my role, but this time it came with a warning. “You might break the whole of BBC iPlayer”.

The challenge came on two fronts - both concerned with capacity. Firstly, there’s a finite number of simultaneous streams we can safely support and secondly there’s an upper limit to the speed at which we can provide them. First imagine that the entire audience of EastEnders decided they wanted to restart the programme. Second, imagine that they all decided they wanted to restart it within the same 5 second period.

These are unique, scaling problems at a national level and it’s inspiring to work with teams who try to solve them. Mitigating the risk of a reduced audience experience has taken the majority of our time on this project. We’ve built a monitoring service so that we can measure traffic in a more timely fashion, ensuring we protect and maintain quality for the current viewers in the stream. Alongside this we worked with our distribution and media services colleagues to trial the feature on BBC Two and BBC One regions to build a traffic profile.

Today we have launched our green button ‘watch from the start’ trigger on BBC One and Two along with their HD equivalents and BBC Four, and it’s available via this list of smart TV and set top boxes. We’ll be looking to learn from the data and provide the best quality experience we can, and hopefully, in the future, pressing the green button will become just as much a part of the TV viewing experience as pressing red has become.

Broadcasting the World Cup and Wimbledon in UHD - the full story

A Technology Capability Framework for broadcasters