Curation kit: a mixing-desk for content feeds on the BBC Homepage

I work as a Product Manager in the Content Discovery team with Andy Pipes, Mike Skelton and Andy Hillel. We look after BBC Homepage and other navigation services.

As part of the plan to make the BBC Homepage better for users, we’ve made a simple new publishing tool for the teams who run the Homepage and its editions in Wales, Scotland and Northern Ireland. We reckon that great products are enabled (or limited!) by the tools used to run them, so in fact this is the first thing we released.

It’s a kind of mixing-desk for live feeds of content from across the BBC.

That’s a lot to choose from. The editors have to decide what to pick for the BBC Homepage.

Though the team get great advance information about the big things coming up, it doesn’t include everything that different users might find interesting. We wanted to make a simple, smart way to put the range of BBC content at their fingertips, and help them pick out what they wanted to use. They also wanted to compile collections of content really easily.

How it used to work

Stories are published to the BBC homepage in two ways: either as hand-made promos, or via feeds of content sucked from elsewhere on bbc.co.uk. For instance, until now the list of top Sport stories was a fixed feed of the articles on bbc.co.uk/sport.

Those feeds were hardcoded into the page and it wasn’t easy to change them. If, in early mornings during the school holidays, the editors wanted to switch out the Sports headlines for some CBBC iPlayer episodes, it was a pain to do. A developer would have to change the code, test it and deploy it. We wanted something nimbler and much more flexible.

Besides that, the old Homepage feeds were managed through seven-year-old technology at the end of its useful life. It sometimes broke, which led to outages. That’s not OK for a homepage used by 8 million browsers a week, so we needed something more robust.

The new publishing tool is called Curation Kit, or CK. It’s web-based and built in the cloud. Since early November, it’s powered some of the feeds on the homepage - for instance the headlines in the ‘BBC News’, ‘Local News’, ‘BBC Sport and ‘Football’ boxes. 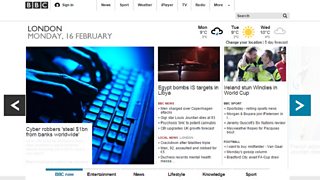 The idea is to give editors a simple way to browse live feeds of content, find the ones they want to publish, then group them together into a ‘curation’ and add some simple rules. Hitting ‘Publish’ makes the curation available to publish via an API.

This is what the editor sees.

The ‘Browse lists’ section on the far left displays the live feeds you can choose from.

We’ve started by hooking in the BBC’s content APIs for News, Sport and iPlayer. You might also spot some of the non-English BBC content used by the Nations’ homepages: Naidheachean is part of the BBC’s Gaelic out and Newyddion is the Welsh language news service.

In the screengrab above, I’ve imagined it’s the Friday before a Grand Prix weekend and I’m thinking about what to publish in the BBC Sport box on the Homepage. I’ve clicked on Sport v6 Formula 1 and in the middle section of the screen, you can see a little card for each of the articles currently on BBC Sport’s Formula 1 index page. To check each article, I just click on the card for that story and it opens the article url in a new tab on my browser.

Once I’ve decided I want that Formula 1 feed for the Homepage, I add it to my ‘curation’ by clicking on the green + on the white list label and it moves to the right hand section of the screen as follows:

Now I can go back to the ‘Browse lists’ tree and find more live feeds to add to my draft curation.

In the screengrab above, I’ve added two more feeds -- Boxing and Golf.

Once they’re in the column headed ‘In this curation’, I can re-order the lists by dragging and dropping them (hard to show in a screengrab!)

I’ve also set the number of items I want from each feed by using the little button on the list label. You can see in the right hand ‘Preview’ column that I’ve ended up with a curation made up of two F1 stories, followed by the top boxing story and the top golf story.

Then I just press ‘Save draft’ and ‘Publish’. In a couple of minutes, my revised curation will appear in the BBC Sport box on the Homepage. And if Sport publish a new F1 story, it’ll just appear automatically.

Once the Grand Prix is over, it takes just a couple of minutes to go back to the Curation Kit, delete the Formula 1 feed from my curation, and replace it with something else.

The Curation Kit isn’t a way to create new content, because the BBC already has tools for that. Besides, that’s not really what the Homepage team does.

Nor does the Curation Kit determine how content is displayed or scheduled. We decided early on that those things are best dealt with by the audience-facing app; we just provide an API.

How we went about it

The Engineering team kicked off by making a simple prototype using live data. That validated the idea and helped establish some things about the UX, for instance that we wanted the workflow for editors to flow from left to right of the screen.

Then the UX team ran five weeks of design sprints with weekly user testing and a lot of feedback from the editors. Their big achievement was to get the main workspace down to that single screen in which editors browse, select, preview and publish. (The Curation Kit has just one other screen, which is a list of all curations.)

Towards the end of design sprints we started the build. We made the simplest end-to-end journey first -- to find a single feed, and publish it. From there we added more details and functions ready for the first use by the editors in early November. 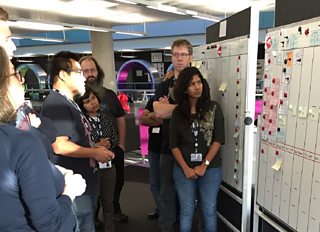 Some of the CK team in front of the board: Faith Mowbray, Lalkhum Sanga, Nathan Messer, Manu Sharma, Ian Fance, Vinali Trivedi

The feedback from the Homepage editors is that the Curation Kit is really simple and quick. Success!

Other teams are using it already, for an app prototyping project and for other Content Discovery work currently in development.

Next, we’re going to add a way for editors to pick an individual article or clip, as well as feeds. We’ll also give them the means to write their own display title and image to an item before they publish it. That’s because we know clickthroughs can increase dramatically when the headline is written specifically with the homepage audience in mind.

Beyond that, we think there are other smart ways the Curation Kit might actively suggest content to the editors. For instance, the editorial team would like to find the right content for particular audiences. We’ve already made a promising prototype, using audience data gathered elsewhere in the BBC -- which shows what kinds of people particularly liked different TV and radio programmes.