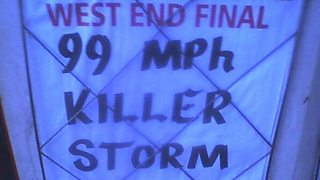 Poster for the London Evening Standard newspaper. The storm was in the United States. Pic by Darren Shrubsole

This is the third and final in a series of posts about Search Engine Optimisation, following Duncan Bloor and Oliver Bartlett writing about optimising Knowledge and Learning websites.

Headline-writing is a journalistic skill that provokes strong feelings - and of course it is meant to.

A sub-editor writes a headline to grab attention, to compel readers.

It's also considered something of an art form, which will often see clusters of journalists poring over headlines at length, in the knowledge that the eventual choice could spell the difference between people reading the article or not.

Good headlines are passed around newsrooms in admiration, bad ones are held up to ridicule, and the best ones go down in history - think of the Sun headlines "Gotcha" and "Freddy Starr ate my hamster".

Given that we are talking about such a cherished institution, it's no surprise that when I as an SEO (search engine optimiser) come along and rewrite the headline rulebook there might be a certain amount of, let's say, polite demurral among your colleagues.

But that's often exactly what is needed at news websites which have previously paid no attention to search traffic when composing their sacred texts.

I moved from my role as BBC web journalist specialising in the Middle East to become the BBC's first specialist SEO journalist in late 2009.

The headline system that I took over had not even been optimised for the web originally, let alone search engines.

Back in the mid-2000s, BBC News had merged the Online and Ceefax teams to write multi-platform stories whose headline length was designed to fit neatly on the old analogue teletext pages. These 31-33 character headlines didn't allow much room to include search keywords; they barely had enough space to tell the story. But the format has been skilfully incorporated into our web journalism and to this day we should be grateful for how it has given the News website its clean, impactful appearance and pithy, easy-to-read headlines.

Not wanting to throw the baby out with the bathwater, we devised a dual-headline system, which would keep the index headlines unchanged while introducing a longer, search-optimised text that would sit at the top of articles and supply the page title meta-tags, which are what search engines take most account of.

All we had to do then was to make sure that the hundreds upon hundreds of different story headlines written every day by teams scattered across the country and the globe were optimised for search!

It's been a long, hard slog, with few resources, to educate all the News staff and monitor all their output.

Fortunately, other branches of BBC Online have been actively optimising their output and I have learnt much from Duncan Bloor and colleagues over at the Vision user building team - people with an SEO, rather than editorial background such as myself. And it has been worth the effort: between the second half of 2009, pre-SEO, and the first half of 2011 visits to News from search increased by 57%, and overall visits were up by 34%.

I like to think that a lot of that extra non-search traffic came as a result of converting search visitors into our regular users and there is some justification for that, although it's difficult to be sure.

The evidence is that before SEO the traffic trends were absolutely flat, if not actually in decline, and as soon as we began optimisation the graphs started to climb and have continued to climb ever since.

My main SEO pitch to journalists has been to explain that it's not just about increasing traffic to a story by a few percentage points: it's about meeting the essential needs of web users to find the information they are looking for; it's about bringing new users to the site, possibly for the first time in their lives; it's about securing long-term promotion for your journalism that is not contingent on the few short hours of exposure it'll get on a web index.

I have given colleagues a four-point checklist for their headlines as the most effective way of making that happen. (As long as they follow the basic principles of journalistic storytelling, the rest should take care of itself.)


It is when I outline these concepts to new inductees that sometimes eyes become fixed, brows start to furrow and hands go up.

Proper names?! Local journalists in particular have learned from cubdom that if you have a headline that proclaims "Burglary in Little Snodbury post office", inhabitants of every other village in the county will barely give the story a second glance. If you say "Village post office burgled" everybody starts reading to find out where.

It's like the newsstand which trumpets "Film star dies": you can be sure that when you buy the paper it's someone you've only vaguely heard of, otherwise they would have said exactly who had died.

How many people are going to search for Little Snodbury anyway?

And as for only using words that people will search for! How can you sell your story properly without the rhetorical flourishes and punchy vocabulary of headline language? What about wit and word play? Truly the era of the creative and memorable headline is over.

My reply to these objections is always that headlines do not obey immutable laws written in tablets of stone; they follow different linguistic rules depending on the context that they occur.

An SEO headline at the top of an article may look like a newspaper headline, but the context is different.

In a paper, it's there to make a reader stop and read as they leaf through the paper. On the web they have already landed on that story, so the headline's job is to make sure they can arrive there via a search engine.

I'm not saying you need to cook up a keyword soup. The text still needs to compel a search engine user enough to click on the story, but if it never appears in a search result then it is wasted effort.

And contrary to what people might think, the inhabitants of Little Snodbury and its surroundings are in fact extremely likely to use that name in search queries, just as schoolmates of a missing teenager will use their actual name in search, or shareholders of a bankrupt Christmas club.

So is it ever possible to write a headline that can turn an eye or raise a smile despite my SEO strictures? I like to think so. The journalists are given 55 characters (including spaces) to express their creativity, a length chosen because it equates to the space allocated for the page title on a Google search results page. A favourite recent example of mine manages to get the best keywords at the front of headline, includes a proper name, and gets a groan-worthy joke in there. Hats off to our Norfolk team for "Bald hedgehog faces pointless existence in Yarmouth".