Over the last few months, the BBC – with huge support from librarians – has brought some of our favourite virtual reality experiences to new audiences in over 150 libraries.

Our research has shown us that viewers find virtual reality experiences uniquely memorable. Yet VR has still to find its place in the home entertainment market. Much like early TV and radio, for now, there’s no habit amongst our audiences for viewing VR at home.

VR is, however, already firmly establishing itself in the professional sector – offering corporate opportunities for training, change management and production amongst many other uses. Along with hardcore VR gaming, this market looks like it’s here to stay.

Location-based VR is the future – for now

The other area of growth in VR so far is in location-based experiences. In VR arcades, museums, art installations, people are more than happy to strap on a headset and immerse themselves in quality VR experiences, and to pay for the privilege. Examples include ‘The Antarctica Experience’ which began life at the Museum of Western Australia, and has moved to Australia’s National Museum for paying audiences, or something like ‘We Live in an Ocean of Air’ which had its run extended at the Saatchi Gallery twice.

But most location-based activity is in highly populated areas, rarely reaching smaller or more remote areas.

For the BBC, location-based experiences need to sit comfortably with the BBC’s public service goals. The VR Hub wanted to show our latest VR in locations with shared public values that cater to people the BBC might not otherwise reach. Locations spread across a huge geographical area with the space, staff and commitment to run multiple VR events. It was a tall ask.

UK public libraries score high on all these metrics. They’re an ideal low-cost opportunity for audiences to engage with BBC VR, and for the BBC to learn about its impact.

After a successful small trial, working with a group of BBC departments (BBC Rewind (NI), BBC Nations & Regions, BBC Marketing & Audiences) with the help of Libraries Connected, the BBC VR Hub set up a series of library VR pop-ups to run over three months across the widest selection of libraries we could manage.

We’ll be following this up by looking at the results of the online survey visitors to the libraries were asked to complete, which was designed by colleagues in BBC Marketing and Audiences, so that we can learn more about reactions to VR, how our audience interacts with it and whether there’s an appetite for VR - BBC VR in particular.

When we first set out on this journey, we were aiming to put pop-ups in around 20-30 libraries. But the tour rapidly grew as librarians pushed VR out to as many of their branches as they could, and now we’ve popped-up in more than 150 libraries so far. 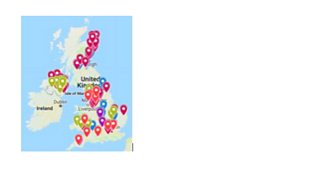 It’s been amazing to see this growth, and even more amazing that it’s all happened organically. It started through contact with individual librarians facilitated by Libraries Connected. As it’s taken hold, more libraries have heard about it and come on board. Coupling high quality BBC VR with the library set-up has enabled the BBC to reach deep into communities all across the country, engaging new audiences in a huge spread of libraries to give them an extraordinary experience.

The model is simple. The BBC loans a handful of headsets to a library (a few have their own), licenses some content and supplies a pack of marketing materials, short training videos and the phone numbers for our team so we can troubleshoot on the hoof. The librarians run the pop-ups and when they’re done they send headsets on to the next location on the tour.

Season 1 began in April and featured Congo VR, season 2 was Doctor Who: The Runaway and we’re now showing 1943 Berlin Blitz for season 3. Once each season is done the headsets return to the start location and the next season begins.

The logistics have mostly worked smoothly but there have been a few challenges.

Despite this, throughout, the can-do attitude and commitment of the network of library staff has made this project work. And it really has worked. The feedback has been incredible. 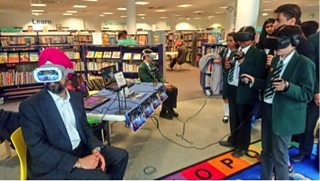 Participants are really enjoying BBC VR. So far, a staggering 96% of those who filled in the online survey found it enjoyable, 91% immersive and 93% original.

Our interim results show that people who visited our VR pop-ups in the libraries are three times more likely to recommend it to a friend or family member than any other out-of-home experience. 92% said they would talk about it with other people. The social media amplification has been huge. So far, the tour has featured in around 600 tweets, reaching nearly 800,000 users. 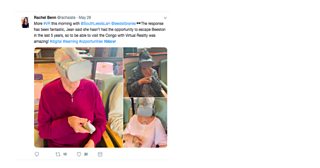 Great content in an unintimidating, safe, familiar environment with attentive helpers has been a huge draw. With the gentle, guiding hand of librarians, we’ve been able to encourage those who would not normally have tried VR to give it a go. For over half of our library VR users, this was their first chance to try VR.

We know that people don’t get how great VR can be until they try it. Persuading audiences to take that first step and put on a headset has been the big challenge for VR makers. Library VR experiences may be helping to break down this barrier. Even those who are otherwise hard to reach, have engaged with VR.

And librarians are getting a lot out of the tour too. Some of these services have been hard pressed in recent years – and this has given them the chance to reaffirm and strengthen their community role around high-quality content. It’s also been a highly visible way for libraries to demonstrate their developing digital skills and expertise. 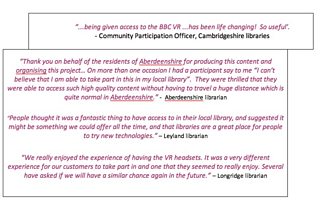 VR is acting as a springboard for learning. After seeing Congo VR 83% of viewers wanted to learn more about the subject. 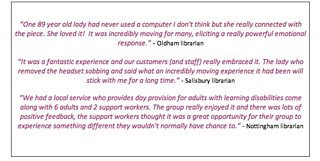 The BBC has a history of democratising new technology, opening up opportunities for many. The BBC Micro played a key role in the home computer boom in the early 80s. Few other organisations have the potential to offer such a wide scale of opportunities for people to experience new forms of media. And radical new media like virtual reality needs that kind of boost.

It’s not over yet

There are two more weeks of the pilot to go and libraries are still joining the scheme. Across the country there’s a tangible wave of energy, excitement and expectation. We’ve offered three seasons and librarians are asking what’s season 4? There’s a real opportunity to build from this fabulously successful, organic project and reach many communities, particularly those for whom new technology or immersive installations are hard to access. 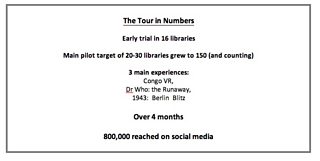 The battle against disinformation