I’m Niko Vijayaratnam, Senior Business Analyst for BBC News and today I want to tell you more about a new product (the Breaking News Tool) that we’ve developed for our News and Sport Journalists.

The BBC currently publishes breaking news online in a number of different ways. You can keep up-to-date with breaking news from the BBC while you’re on the move:

via SMS by sending ALERTS START to 82002

or by visiting www.bbc.co.uk and checking the latest breaking news displayed on the 'ticker' or as ‘site-wide-alerts’ 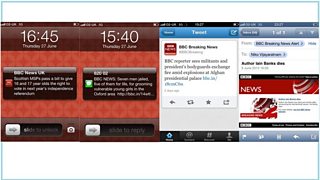 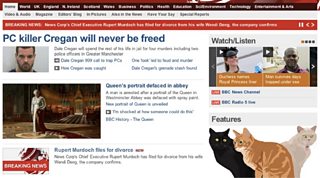 A breaking news bar on the ticker (the red bar) on bbc.co.uk/news

The Breaking News Tool (BNT) is a new product we’ve launched this month which allows journalists to deliver breaking news alerts to you in up to six different ways at once. As the Product Manager for the BNT, I’ve been responsible for defining how this product should function.

Why did we build this tool?

The BNT solves these problems by allowing journalists to publish a single accurate breaking news line to multiple platforms at once from a single interface, therefore improving the speed and ease at which we can get breaking news lines out to you. It also removes the need to be trained to use multiple different systems. 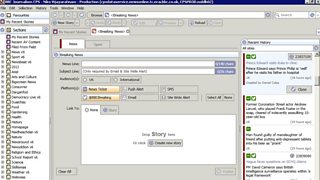 For most breaking news, once the BNT is open, the process of publishing an alert now simply involves:

1. Writing the breaking news line into the ‘News Line’ field,

2. Selecting the platforms we want to make the breaking news alert available on.

4. Once we have made these decisions, we can simply hit the ‘Publish’ button to deliver you a breaking news alert.

The ‘recent history’ section on the right hand side tells us whether the alert was published successfully or not (i.e. the icons for the platforms we selected will go green to indicate a successful delivery, or red if an error occurred).

For some platforms (SMS messages, Emails and Push notifications), we have made the decision to mandate that alerts need to be linked to an article on bbc.co.uk so that when you receive an alert, you have an ‘onward journey’ to more information (if available) on that storyline. We haven’t previously included article links in SMS alerts before but given a large proportion of the audience now have an internet connected mobile phone, it made sense to provide a way to let you quickly find more information about the item of breaking news on the go.

As you might imagine, for some breaking news we won’t have an article ready to link the alert to. For this scenario, we’ve made it possible for Journalists to automatically generate a brand new article ‘on the fly’ from within the BNT. This means that we can give you the URL to an article on the developing storyline when you receive the alert so that you don’t have to wait, or go elsewhere, to find more information if you’re interested. 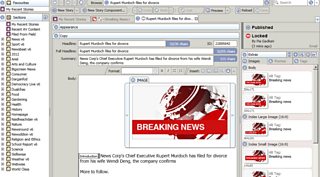 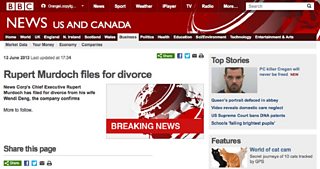 the article as it appeared on bbc.co.uk/news immediately after the story broke

The article linked to the alert will look as shown in the image above when you receive it (i.e. with ‘More to follow’ automatically included underneath the headline and summary) if you click on the URL before we are able to update the story with more detail but we aim to do this as soon as possible.

How did we build the Breaking News Tool? 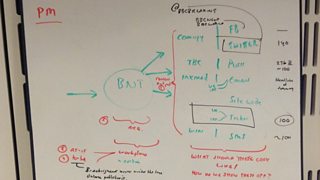 Output of the kick off workshop

As with most projects, I started by asking the key stakeholders to agree on the vision for the product so everyone involved could be clear on the problem we were looking to solve. In this case my colleague Russell Smith, Development Editor for News defined the vision which was to ‘be able to publish a single accurate line on all platforms’ - this was something that we stuck to closely during the development of the BNT.

Once I was confident that I had captured all of the key requirements I drew up a “story map” to distill the requirements into the core features of the BNT, define the “minimal viable product” (MVP) and highlight the “minimal marketable features" (MMF). The intersection of MVP and MMF (i.e. the green boxes on the story map) defined the minimum portion of the problem space I wanted to solve in the first release of the BNT to deliver the required value to the end users. 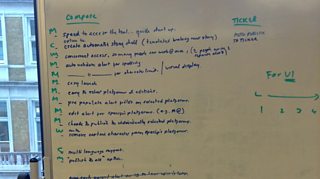 A whiteboard picture showing the output of the requirements gathering workshop 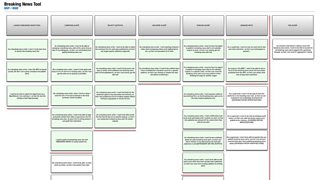 I engaged with the following third parties (who already provided services to allow us to deliver alerts as SMS messages, Emails, Push notifications and Tweets) and members of the CPS team to ensure that we could integrate the BNT with their systems to deliver alerts to the end platforms:

Security was a key requirement for us so we needed to ensure that access to the API’s supplied by the third parties was limited to the BNT only.

Having assessed the technical feasibility of the project and with the scope of the product defined, I co-ordinated with our UX&D designers and developers within the CPS team (who are experts in building new interfaces in our content management system) to design the interface for the BNT. We began by honing the user workflow and compiling a set of paper-based and clickable prototypes which we could user test with our editorial colleagues to get early feedback on which ideas would work well and which wouldn’t. Sure enough, we had to make some changes, but by getting the product in front of the end users early we were able to incorporate the feedback quickly.

Once the requirements had been defined and estimated by the CPS team, work on developing the product was scheduled and got underway.

Testing the BNT was a unique experience given the fact that we couldn’t actually test alerts on our production accounts without sending messages to you, the audience! Working with the third parties, we were able to set up test accounts and put in place safe guards on the production environment to enable us to test safe in the knowledge that alerts wouldn’t make it out to the audience until the BNT went live. Testing the end to end architecture was heart stopping at first!

I’m pleased to have been able to deliver this product and to see it used in Newsroom of our New Broadcasting House offices. We have had a positive reaction from the users and have seen an improvement in the journalist workflow i.e. it now takes around 2 minutes to write a breaking news line and publish it to all available platforms when previously, at times, it would take more than five times that time to achieve the same task.

We have also incorporated a section in the product for our colleagues in BBC Sport who will soon be able to make use of the tool to publish breaking news to the audience of some of their key outputs.

I hope this post has given you an insight into how, with products like the BNT, we are constantly striving to innovate behind the scenes to improve the way in which we deliver News online.

I look forward to being able to take the BNT further in the near future by integrating it with more outputs and potentially adding new features to further improve the workflow for our Journalists.

—
Many thanks to Cameron Taylor, David Beaton, Purnima Thompson, Andy Gritton, Kirsty Brown and Russell Smith for their hard work on this project.