The BBC has created an experimental ‘holographic’ TV device that brings to life some of its archive footage, ranging from the iconic BBC globes to giant dinosaurs. Cyrus Saihan is Head of Digital Partnerships and explains more on this exciting project.

Although the famous Princess Leia hologram from Star Wars was set a “long, long time ago”, this type of audience experience might not be that far away. Holographic experiences, like Ultra-High Definition or virtual reality, offer audiences a level of detail and realism that only a short while ago seemed virtually impossible but that are now becoming a reality.

For our experiment, we used existing technologies and simple techniques to explore ‘holographic’ content. The device that we made also gives us an extremely low-fi and low-cost way to assess how the ‘floating’ images of augmented and mixed reality devices, which aren’t readily available for audience testing, might be used to view BBC content in the future.

This is all part of our work exploring emerging technologies for future audiences – in fact, our Research and Development team wrote a theoretical paper on holographic techniques back in the 1970s. You may remember that we dipped our toe in the water with virtual reality when it first came out and have since gone on to create several experimental pieces of 360 video and virtual reality content.

While virtual reality has been grabbing the headlines, some of the worlds’ largest technology companies have recently been investing in mixed reality and augmented reality, which has just become a mainstream phenomenon, if you are a fan of catching certain pocket monsters. But that’s just the tip of the iceberg: if devices such as Microsoft’s HoloLens and the Google backed Magic Leap also capture the public’s imagination, we could soon find ourselves in a situation where the lines between digital content and the real world become increasingly blurred. 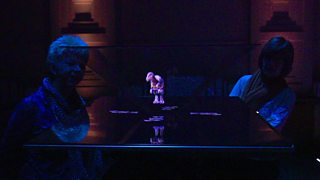 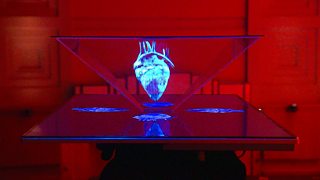 We had seen that people had created small ‘holographic’ displays using mobile phones and so it occurred to us that making a super-sized version of these low-cost displays would give us a way to see how ‘holograms’ might work on a larger scale, something comparable to the size of a living room TV.

To make our ‘holographic’ TV, we took a 46” TV that we had in the office and then asked a local plastics cutter to make a simple acrylic pyramid shape based on some sketches that we had done.

By placing this acrylic pyramid on our flat screen TV, we were able to try out a modern-day version of an old Victorian theatre technique and create the illusion of floating ‘holographic’ like images.

For this theatre trick to work, the video footage needed to be of a certain type, so we looked through the BBC public service and BBC Worldwide archives for iconic footage that matched this criteria and then worked with UK based visual effects and hologram specialist company MDH Hologram, who tweaked and formatted our archive footage to bring it to life. 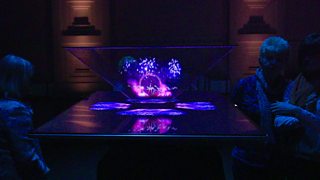 Although it was just an experiment based on some sketches and made using low-cost acrylic, it produced some striking results.

We tested out our display with a few audience members who were doing a tour of our New Broadcasting House building in London (have a look at the video above). Reactions were mixed, ranging from “you feel more engaged with the image, more involved” and “it brought it to life” to “it was better from a distance than closer up”.

When we asked them what types of programme they thought might work well on a ‘holographic’ TV, the most popular suggestions that our audience members gave us were nature documentaries and sport.

We learnt from our experiment that the images were much more powerful when the ambient lighting levels were low and when the room was dark. We also noticed that the effect worked best when the display was positioned at eye level.

Will we see ‘holographic’ TVs in the living rooms of the future? 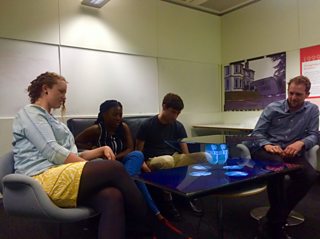 There are limitations with our experimental device: as mentioned above, only certain types of footage will work, you need a fairly low level of light in the room to get the maximum impact and the viewing angles are narrow. The physics of the light reflecting off the pyramid and the TV’s screen size also means that there will always be a practical limit to the size of a display such as this.

However, this wasn’t an exercise to test how well this specific prototype performed, it was intended to give us a good approximation as to what BBC content would look like on a ‘holographic’ TV, get an insight into what audiences thought of it and give us a cheap way to explore floating images in the real world.

Our experiment was fairly simplistic, but the new technologies on the horizon have the potential to completely change the way that audiences experience media content in the future.

You can imagine a world where instead of watching a film star being interviewed on the sofa of a TV chat show, they feel as if they are sitting right next to you on your own sofa in your living room, or where instead of looking at a 2D image of Mount Everest, it appears as if the snow on the mountain top is falling around you.

Our Research & Development team have been considering some of the other ways that emerging technologies could impact the way that audiences consume and engage with media in the future and you can see some of their ideas in this short video.

We are always looking out for ways to bring third party innovation into the BBC to help us explore new technologies and types of content with our audiences in new ways – if you have any innovation ideas or technologies that you think our audiences could potentially benefit from, do get in touch in the comments section below or contact me on Twitter @cyrussaihan.