Hello, I’m Dan Taylor, Head of BBC iPlayer and today I’m delighted to share how we are evolving BBC iPlayer for the multiscreen world, starting today with the rollout of a new version for computers, tablets, mobiles and connected TVs.

Just over six years ago, on Christmas Day 2007, we launched BBC iPlayer, offering users the opportunity to catch-up with the last 7 days of BBC programming via their computer.

Fast forward to now and BBC iPlayer is available on over 1,000 different devices and serves 10 million programme requests a day. It now offers more than just catch-up, with live streaming, archive collections, exclusives and premieres. We’ve also introduced innovative new features such as mobile downloads, enabling you to watch offline and on the go, and Live Restart, enabling you to jump back to the start of a programme while it’s being broadcast. It’s a measure of how loved BBC iPlayer now is that it’s the number one brand in the UK according to YouGov’s BrandIndex Ranking.

However there’s always room for improvement and following extensive research and user testing, we are today rolling out a new web version of BBC iPlayer (accessible via bbc.co.uk/iplayer on computers, tablets and smart phones) and a new TV version (accessible via the existing BBC iPlayer app on a range of connected TV devices). The BBC iPlayer mobile and tablet apps will be updated with the new interface in the coming months.

The new iPlayer has been designed for a multiscreen world, so the experience is consistent, but optimised across PC, tablet, mobile and TV devices and we've built it in such a way that we can rapidly develop and release new features across those four screens. 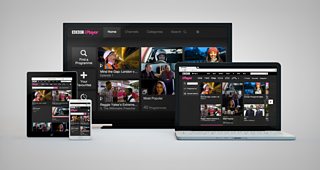 The new web version of iPlayer has been developed using responsive design, which means we can deliver the iPlayer experience to multiple different screen sizes without building separate versions. It also means that if I share a link to iPlayer from my computer, it will work just fine if you open it on your mobile or tablet browser.

A major focus of this release is making it easier to find something to watch, helping you quickly and easily find the programmes you know you’re looking for and, crucially, helping you discover something new. The current iPlayer’s pretty good if you know what you want to watch, but we know that 42% of visitors are now coming without a particular programme in mind.

With that in mind, we've created a brand new home screen that's simpler, more visual and easier to browse. There’s a consistent navigation bar along the top, providing easy access to channels and categories. There’s a ‘Find tools’ panel, of which more later. However the majority of the screen is dedicated to an image-led browsing experience. 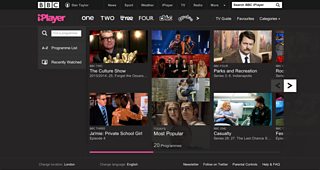 The home screen of the new BBC iPlayer on a computer

Hovering over a programme image provides a short description of the episode along with its duration and when it was first shown - simple information that users have told us they find useful in selecting a programme to watch.

It’s not just the homepage in new iPlayer which offers this new image-led browsing experience. We've also developed such pages for each of our TV channels, creating a place to discover and enjoy the best those channels have to offer even when they’re off air, complementing the more traditional schedule view. 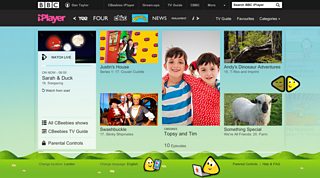 We've created a similar browsing experience for categories and responded to user feedback by replacing the Factual genre with genres which users talk about when describing their TV viewing habits: Documentaries, Food, Arts, History, Science & Nature. These categories showcase the range of catch-up, archive, exclusives and premieres – all forms of TV content in one place. 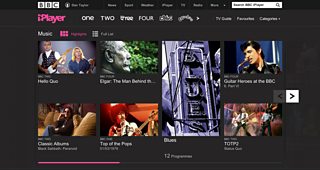 And it’s not just genres. There are also categories for Audio Described and Signed content and for Northern Ireland, Scotland and Wales, showcasing the best programmes from and about those nations. In addition to the highlights view, each category also offers a full A-Z list, which details every programme in that category.

Collections are a brand new addition to BBC iPlayer which aid programme discovery by grouping programmes by series, season, event or theme. BBC Four has been releasing themed archive collections for the last few years but they’ve been difficult to find in iPlayer. The new iPlayer enables us to showcase those collections on an ongoing basis. 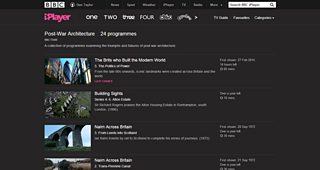 Of course, watching programmes is the beating heart of iPlayer and we’ve optimised the new playback page for what users are looking to do before, during and after viewing. 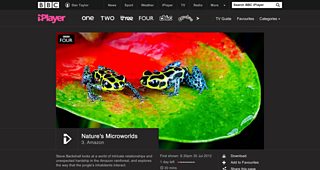 Beforehand, we present all the key information you need to decide whether to watch and provide simple navigation to other episodes from the same series, in case you were after a different one. Once you hit play, we dim the lights and get out of your way.

The new web version of iPlayer makes use of the BBC’s new Standard Media Player which, as well as providing our best ever playback experience across screens, also enables us to develop plug-ins to enhance the playback experience.

For example, if you’re enjoying a programme and decide you don’t want to miss out on future episodes you can now add it to your Favourites without leaving the playback experience.

At the end of an episode, if the next episode in the series is available, we’ll cue it up. We’ll also always offer you suggestions of other programmes you may also like, powered by a new and improved recommendation engine. 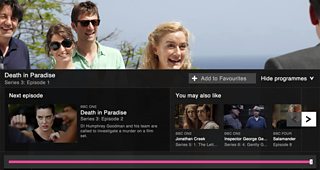 This panel will also include onward journeys to other relevant content on BBC Online, such as BBC iWonder guides.

We've not forgotten about the 58% of users who arrive knowing exactly what they're looking for, with the introduction of Find tools.

First, we have the ‘Find a Programme’ box, which not only remembers your recent searches, but also suggests what you might be looking for as soon as you start typing. So, if I type ‘E’ I can get straight to EastEnders. 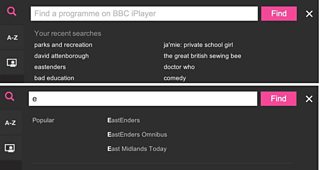 Next we have the A-Z Programme List, which does exactly what it says on the tin. We know many users really value the A-Z as a simple way of scanning the full iPlayer inventory. 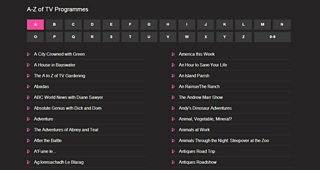 And finally, a Recently Watched section which remembers what you’ve watched recently so you can quickly and easily resume watching a programme you were part way through or find new episodes of a series you've been enjoying. 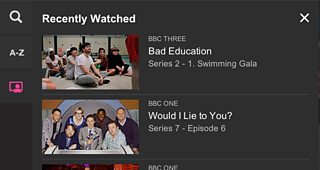 Last but by no means least, we’ve invested a great deal of time and effort in making the new iPlayer as accessible as possible. Pages are organised visually into sections with clear headings to ensure both sighted users and blind users with screen readers can navigate content across desktop, tablet and mobile seamlessly. There are also improvements to the Standard Media Player to support users with different set ups including keyboard-only users, screen reader users and voice input users.

Audio description, signed and subtitled content are at the heart of our offering. Subtitles are available on catch-up content via the media player itself (just click/tap the ‘S’ icon) and soon we will soon be adding support for Audio Described and subtitled programmes on mobile and tablet browsers. You can read more about this, and other updates, in our accessibility FAQ.

I’m very proud of what the iPlayer development teams in London & Salford have built and as I mentioned, this launch is just the beginning. We've got ambitious plans for later in the year including extending the standard availability window from 7 days to 30 days and introducing new IP only channels (such as a Radio 1 video channel), subject to approval from the BBC Trust. We also have a raft of exciting personalisation features in mind.

Thanks for reading. Please do have a play with the new iPlayer and let us know your thoughts - we’ve created a special survey to capture your feedback.

Also, do look out for blog posts from other members of the iPlayer team over the coming weeks explaining different aspects of developing the new iPlayer.

Welcome to the new BBC iPlayer on TV