I'm passionate about listening to and responding to feedback from users and read the BBC's online feedback log over my breakfast every morning.

The iPlayer feature that has most frequently appeared in this log has been our desktop downloads solution, BBC iPlayer Desktop. Many of you have not been happy with the service, so one of my first jobs was to try and implement a solution. Today, I'm pleased to announce the release of a new desktop downloads solution, BBC iPlayer Downloads, which aims to address the underlying cause of many of those issues. 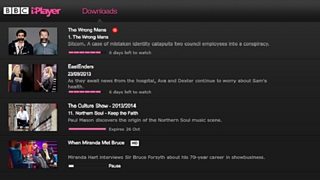 BBC iPlayer Desktop relied on users downloading and installing Adobe AIR. Unfortunately updates to this underlying technology often resulted in issues with the BBC iPlayer Desktop, with users reporting that they had lost downloaded programmes and/or were unable to download any new programmes.

We've also taken the opportunity to simplify the application, focusing it on the core tasks of the download and offline playback of BBC TV programmes. So, for example, we haven't rebuilt the Series Record functionality in the new application, which introduced significant complexity and was only used by a minority of users. Similarly, we haven't rebuilt the Live TV and Live Radio areas, which couldn't be used offline and duplicated functionality on the BBC iPlayer website (minus great new features like Live Restart).

The Parental Guidance Lock has been integrated with the BBC iPlayer website (so you don't have to set it up twice, or remember two separate passwords) and is now triggered at the point of download rather than playback.

We've also simplified the download mechanism on the website so it's less vulnerable to browser updates and we've consolidated the download links so they now only appear on episode pages, in line with the download experience in our mobile applications.

Unfortunately, we've had to discontinue downloads in the Windows Media format as it was no longer cost-efficient to produce these downloads.

I appreciate some users will miss these features but I hope you'll agree that having a more reliable download solution is worth the trade off.

From today, it will no longer be possible to download the old BBC iPlayer Desktop client but any programmes already downloaded should continue to be playable until they reach their natural expiry date.

More information on installing and using BBC iPlayer Downloads can be found on our Help pages.

Do let me know what you think of BBC iPlayer Downloads in the below comments and don't forget you can also download programmes using our mobile and tablet applications.