My name is David Berlin and I’m responsible for the BBC iPlayer mobile application on Android.

Last year Dave Price, Head of TV & iPlayer wrote about the importance of the  Android platform and how we are focusing on three key areas to improve the BBC iPlayer experience for audiences with these devices:

As a reminder, my team have been focusing on:

I'd like to give you an update on how we are delivering against these goals. 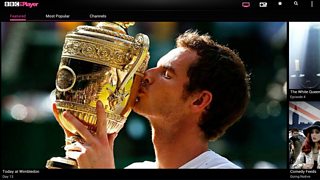 We’ve been gradually improving the video quality we serve over Wi-Fi to all Android devices, and had focused on delivering comparable (to iPad/iPhone) quality media to the 75% of you on our most popular devices.  On Tuesday we flicked a switch in MediaCityUK, Manchester, which enabled those higher quality streams on all of our most popular Android phones, tablets and ‘phablets’ that can handle them.

With higher quality playback achieved on the most popular Android devices, we then moved on to addressing support for a range of screen sizes.

Since the Android app launched in February 2011, tablets larger than 7.1” have been able to install BBC iPlayer from the Android Market/Google Play.  However, when you tapped on the icon on your device home screen, it launched the BBC iPlayer mobile website.

With requests from tablets now making up around 20% of total iPlayer video requests each month, and larger tablets making up the majority of those requests, we wanted to focus on supporting these devices first.  We know that more and more of you are using your tablet like a personal TV – and want the benefits that an app can bring (such as mobile downloads – coming later this year) on these devices.  That’s why, a month ago we released an update to remove the website link and delivered the BBC iPlayer app to all Android phone, tablet and phablet device sizes (more than 3,000 different models).

Prior to delivering mobile downloads, we felt it was critical to put these two building blocks of quality playback and support for larger tablets in place.  Today we have an Android development team that is almost 3 times the size of the iOS team.  Over the past months this team has made excellent progress building the downloads feature, and with 100% of the team now entirely focused on downloads we’re looking forward to accelerating the delivery and launching asap.

We appreciate the frustration the Android community has been experiencing in the time it is taking to deliver this desired feature, but I hope this provides a little more context around the complexities involved.

I read app store comments on a daily basis and try to work out the cause of the issues that some devices on certain OSs are experiencing. I’m always interested in feedback so please share your thoughts and comments below.