Taking to the skies - in VR 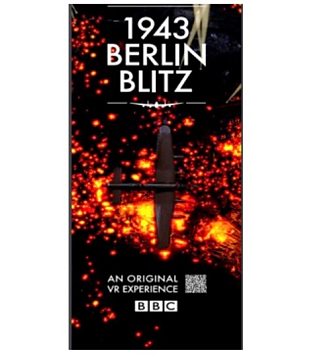 As summer temperatures soared to record-breaking highs, the BBC VR Hub staged an ambitious event to launch a new interactive VR experience on four HTC Vive headsets in a small tent in a field at the Royal International Air Tattoo at RAF Fairford.

Created by BBC Northern Ireland's Rewind team and VR production company, Immersive VR Education, 1943: Berlin Blitz is based on actual BBC sound archive recorded during WW2 on a Lancaster bomber raid over Berlin. Viewers share the cockpit with the brave crew and courageous team of war reporter, Wynford Vaughan-Thomas and sound recordist, Reg Pidsley as they document their flight on a terrifying mission over Berlin. The sense of danger is real, and justified - just four months after this flight, their plane, F for Freddie, was shot down over Stettin.

Less than a year into the BBCǯs new VR venture, the BBC VR Hub has so far produced four ground-breaking projects. Both 1943: Berlin Blitz and Make Noise – a voice-activated experience celebrating the suffragette movement – will officially premiere at the Venice Film Festival. Damming the Nile, which takes viewers on assignment with BBC News Africa correspondent, Alastair Leithead, to investigate the impact of a huge new dam, has been nominated for a Rose d'Or and last week the BBC announced its first Virtual Reality Prom: Nothing to be Written.

BBC VR Hub's intended audience for these experiences extends beyond the VR community. In order to fully explore the appetite for VR, the Hub is aiming to get high quality pieces out to audiences who might not otherwise have encountered virtual reality - like the 185,000 families, veterans and teenage groups who converged on RAF Fairford for the Air Tattoo in July.

With a skeletal crew, the usual tech gremlins and a thunderstorm it seemed unlikely that our ambitious set-up – screening across four headsets simultaneously in a small tent in the middle of a field – would stand the test. 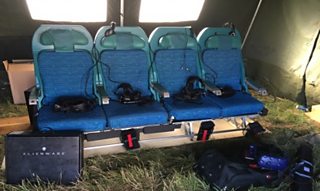 In four seats ripped out of a 747, inside a vintage RAF tent accompanied by rumbling vibrations of F16s and other aircraft streaking overhead, over 500 people watched 1943: Berlin Blitz during the three day event. With the help of Chris Long, from Immersive VR Education and Warren Bell from BBC Rewind, the BBC VR Hub team put a constant flow of visitors through the 14 minute VR experience.

The response was incredible. Despite challenges due to the heat and location,Men, women, teenagers, veterans and civilians all went up in F For Freddie,and their feedback was overwhelmingly positive.

Some came back two or three times, despite queues of up to 45 minutes. There were tears, congratulations and plenty of awe. Many had never experienced any VR before. 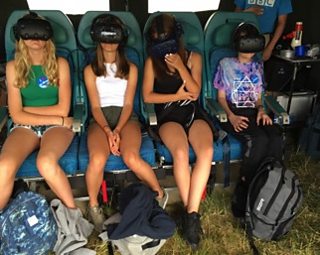 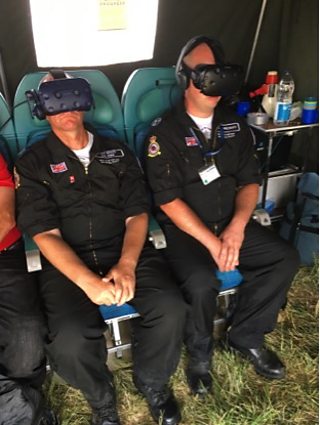 Comments included: "...if there was one thing worth coming to the show for today it was this!"

"We want more of this from the BBC"

"We saw it on BBC Points West so we got up this morning, walked 5 miles over the fields from our house and came straight here" (0730 Sunday)

So convinced by the 'real' computer graphics, one older man asked: 'Did you make the film in 1943?' 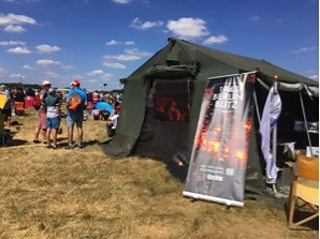 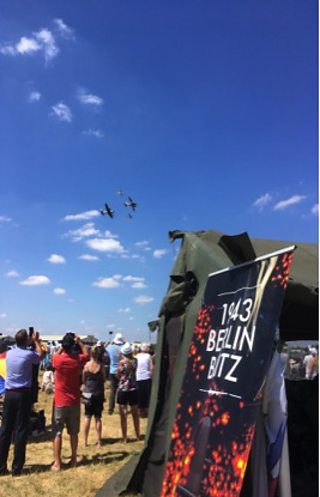 Such a project would have been inconceivable just a few years ago. VR kit and expertise is growing rapidly. Whether the audience will match that growth is still a big unknown.

Over the next few months, the BBC VR Hub will be running a series of VR Pop-Ups in libraries to bring quality VR to a wider audience so they can decide if it's something they'd like to see more of. The BBC VR Hub will also continue to work closely with the BBC Blue Room to show VR at various events throughout the summer and autumn. As a result of the Air Tattoo multiple museums have expressed interest in showing 1943: Berlin Blitz. They see it as a valuable tool to introduce new, younger audiences to history.

That comes with its own challenges. Most VR headset makers recommend children under 13 should not use VR. Even those over 13 are unlikely to have access to a headset or to easily find good content. And, as the team at the Hub knows, it's got to be very good content to convince viewers to put on what are still quite clunky headsets, tolerate occasional technical glitches - common to new kit - and surrender to up to 15 minutes in the virtual world.

The 360 (non interactive) version of 1943: Berlin Blitz was shown by the BBC Blue Room earlier this month at the Turing Festival – again to great acclaim. Despite a lack of a VR-viewing habit among the audience and associated kit and quality issues, the team at the BBC VR Hub is cautiously optimistic that these projects might be indicating the audience wants good, and appropriate VR. There are a clutch of similarly ambitious, exciting projects in production. As these are released, over the next year or so, the BBC VR Hub – and the BBC as a whole - will have a much better understanding of what the virtual future might look like.

Other BBC VR Hub projects have included AR prototypes with BBC News Labs and support for in-house 360 and VR ventures including Crossing the Sky, BBC News’ Is Anna Okay? and Bloodhound, a 360 ride in the world’s fastest land vehicle.

To see much of this content for yourself, visit https://www.bbc.co.uk/virtualreality or download the BBC VR App: https://www.oculus.com/experiences/gear-vr/1834522029951979.