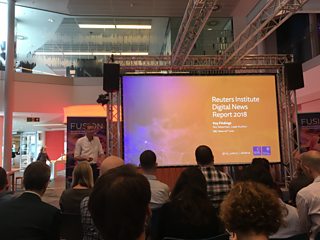 Social media as a source for news is in decline for the first time, according to an international poll which was revealed to the BBC this week. Most of the drop was due to a growing distrust in Facebook as a news platform.  Meanwhile people's trust in the news in general has stayed stable with just over half of people saying they trust the news they use themselves.

The Reuters Institute Digital News Report is an annual survey of digital news usage across the world, and this year it polled 74,000 people in 37 countries.

It found that usage of Facebook as a source of news had dropped for the first time, most noticeably in the US (down 9%) but also most other countries including the UK (down 2% to 27%).

Other trends that emerged were:

You can find more details here.