Digital Glastonbury: From Stage to Smartphone

By the time you read this I'll be in a field on Worthy Farm, Pilton getting ready for the return of Europe's biggest festival. The BBC has been the exclusive broadcast partner of Glastonbury Festival since 1997 and in those 16 years we've shared some of the most incredible musical moments from that farm in Somerset. 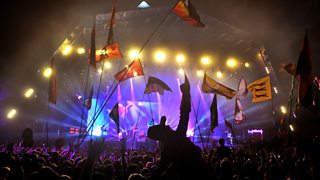 This year you'll be able to see more of Glasto than ever before on whatever device you like, the first truly digital Glastonbury.

We're beaming six stages of live music back from Glastonbury and distributing on mobiles, tablets, computers, and via the Connected Red Button so you can watch it live or on-demand. I thought you might be interested to read about how we're doing that and how we approached building the website you'll be using to watch it.

The fun all starts in the (hopefully dry) fields of Pilton. BBC TV crews will shoot and mix live at the six stages and send these feeds via satellite back to White City in London.

Those TV signals will then be sent via our online team in Shepherds Bush (who add some graphics and check the quality etc) up to MediaCity UK in Salford. There our friends in BBC Sport will encode the video and send it out on to the web.

It's a very similar process to the one we used during the London 2012 Olympics. In fact the video will be encoded on the exact same systems that were used to bring you the action from the Games last summer.

With our video signals happily sitting in the cloud we then stream them via a video player on to the BBC Glastonbury website on your favourite device.  We've built on the core of the video player that was used at the Olympics to bring you a really cool 'theatre mode' on PCs and iPads - put it in fullscreen and flick between the streams at your leisure. 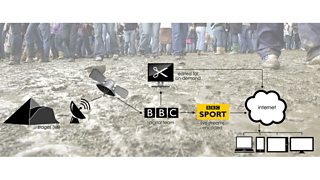 It’s the first time we’ll be able to move the editing and compliance processes for Glastonbury to our team in White City thanks to a handy piece of kit called Stagebox, developed by my colleagues in BBC Research and Development.

Stagebox means we can send broadcast-quality video up to our friends in Salford over the Internet, substantially reducing costs and the complication of booking broadcast lines between the two buildings.

I'm really proud of the work we've done to make the Glastonbury website look amazing whatever device you're using.  We've completely redesigned the webpages led by a philosophy known as Responsive Design.

Whereas in the past we might have made a separate, lesser mobile site, this Glastonbury website is technically the exact same page wherever you load it.

Responsive design means it responds to the height and width of the screen you load it on and to environmental factors such as orientation and the presence of a touchscreen.  (Once the weekend gets going, check out our fullscreen photo galleries on your mobile or tablet - swiping through those beautiful action shots is one of my favourite features.) 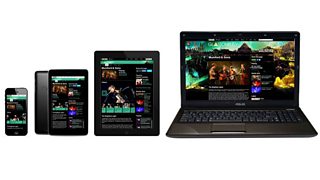 The Red Button has been a hugely important part of our Glastonbury coverage for the last few years.  At the last Glastonbury 4.5 million pressed red for extra choice.

This year there’ll be three red button channels available and for the first time we’ll be streaming on the BBC’s Connected Red Button service.  Connected Red Button launched in December.  At the moment, only available on the Virgin TiVo platform, it's a really exciting glimpse of the potential of connected TVs.

If you have the Connected Red Button you'll be able to press red and access all the Glastonbury video streams and on-demand videos.  And just as we've aimed to make sure all web users have access to the same content, Connected Red Button viewers will too.  Literally the exact same video assets are available there, all powered by the same feeds and same tools as the website.

Everybody uses their devices differently and our aim has been to make a flexible experience that you can mold around the way you want to watch Glasto.  You can watch on your phone on the move, on your tablet in bed, at your desktop computer or in your lounge on the Connected Red Button.  Or all of the above.  At the same time!

Right, I better go and pack my wellies.  I really hope you enjoy the first truly digital Glastonbury festival, with access to more music whenever and wherever you want it.  We’d love to hear your stories about what you watched and where – use the comments below or tweet us on @BBCGlasto.

Find out about the Connected Red Button content available for Glastonbury 2013 and how the BBC are using social media to cover the weekend.