BBC Digital Media Distribution: How we improved throughput by 4x

BBC Digital Media Distribution has been working to deliver more throughput from their caching infrastructure. Senior Software Engineer Alistair Wooldrige explains how the team diagnosed poor performance with existing software and why replacing it achieved a 4x increase in performance.

Within the BBC Digital Media Distribution team, we used Varnish cache for the first version of our Radix caching servers. A Radix server caches HTTP responses from origin servers - usually video and audio content for iPlayer, delivered using one of the HTTP Adaptive bitrate streaming formats such as MPEG-DASH, HLS or HDS. For more information on Radix and our overall caching strategy, see Digital Distribution: How on demand content reaches audiences.

Varnish soon became a bottleneck in the caching server architecture. It only managed to serve 4 Gbps during load tests. This post investigates why internal Varnish architecture limited a caching server to 4 Gbps, and why replacing Varnish with nginx increased output to 20 Gbps.

High spec hardware is used for the caching servers. Each server is a HP ProLiant DL380 Gen9 consisting of:

Varnish startup parameters are optimised for both caching server hardware and projected workload:

Of the above, there are a few of note:

When moderately loaded, all 48 cores of the caching server are heavily utilised as shown in this CPU utilisation graph:

The graph shows most cycles are spent executing kernel instructions rather than user space Varnish instructions. The large kernel overhead is not ideal and is due to:

The combination of characteristics above causes huge pressure on the virtual memory (VM) subsystem due to extensive dirty page writeback and page steals. The VM subsystem is constantly modifying page table entries (PTEs). This PTE churn results in frequent translation lookaside buffer (TLB) flushes and many inter-processor interrupts (IPIs) to do so. These TLB flushes have a very negative performance hit. The VM bottleneck is shown in the diagram below: 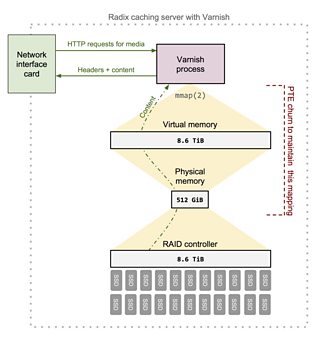 Consider the situation of a cold caching server entering active service. Requests result in a cache miss - Varnish fetches content from origin and writes it to the memory mapped area. When this write is issued:

The above scenario executes quickly, as content has only been written to pages in RAM, not directly to disk. Let's compare the above scenario to one where the caching server is warm - it has been in service for enough time to utilise the backing store. Due to the large difference between available RAM and the size of the backing store, the RAM page cache contains a minority of the 8.6 TiB working set, most cached content must be read from the backing store. When a request arrives for cached content, Varnish reads from a VM address of the memory mapped file. After the CPU has page faulted and no entry found in the page cache, the page cache needs to allocate a new page frame. With a cold caching server, there is little overhead, but now the overhead is significant:

Note that all disk I/O in Linux goes through the page cache - whether reading/writing to a VM area representing a memory mapped file, or just using the standard read(2)/write(2) system calls. Linux decides when it needs to write this data back to the file on disk at a later time - this is known as write-back caching. The readahead mechanism within the kernel pre-emptively loads pages into the page cache before they have been accessed. Varnish advises the kernel using madvise(2) that the memory mapped files are accessed in random order (by supplying MADV_RANDOM) to prevent this behaviour.

The TLB flushes are shown to impact performance during profiling (see perf record -g output later on in this post). A large percentage of CPU time is spent in the smp_invalidate_interrupt function, which is the TLB flush IPI handler.

2) Lock contention in the VM subsystem

When a caching server is under moderate load, there are periods of several minutes when the machine becomes unresponsive and no content is served to the client. As well as occurring sporadically, they consistently occur when RAM becomes fully utilised by the page cache, for example shortly after introducing a cold machine into service. During these unresponsive periods our monitoring system receives no data, which can be seen as a gap in the following RAM utilisation graph:

Observing CPU utilisation during unresponsive periods reveals cycles are mostly being used by the kernel:

Statistically profiling the system during this period using perf-record(1) and perf-report(1) tools provides useful insight. These tools interface with the Linux Performance Counters feature - available since 2.6.31. Running perf record -g over an unresponsive period captures the counters, then inspecting the results after with perf report -i ./perf.data produces:

The report highlights a significant amount of time is spent contended on spinlocks within shrink_page_list, shrink_inactive_list and other functions related to scanning page lists. Code inspection suggests that for page cache intensive workloads this is an area of known contention.

Deep dive: why Varnish stops serving content during a spinlock

Shortly after a cold machine enters service and the page cache exhausts available RAM, there are many dirty pages that need laundering. At this point many Varnish workers are servicing cache misses at once, all page faulting, and all entering the direct reclaim path of the kernel VM subsystem that must steal dirty pages for use by the page cache:

System tuning to alleviate the problem

These tuning cycles provided minor improvements in performance, but did not prevent the spinlocks.

Two main problems caused us to move away from Varnish cache:

The poor performance of memory mapped files limited data output to no more than 4 Gbps from a caching server. Combined with the unacceptable spinlocks these two problems were highly influential in us looking for a Varnish alternative. We tried hard to tune both Varnish and the OS, but never reached an acceptable level of performance.

It is important to note that Varnish is successfully used in other BBC platforms. It performs well when the size of the cached content does not exceed RAM, for example on our web server farm. It is only on this very specific platform that Varnish doesn't meet our performance requirements.

The solution - replace Varnish with nginx

Varnish has been replaced with nginx, which increased caching server performance significantly. The following are key nginx features/configurations that allowed this: 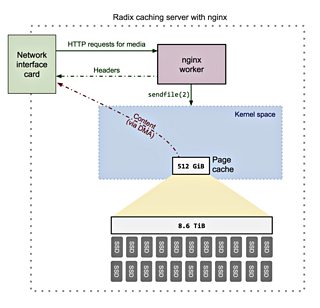 Using nginx with the above configuration does not suffer the same performance problems as Varnish because content is not cached in memory mapped files. nginx also takes advantage of sendfile(2) to bypass user space when serving content, improving performance significantly. As a drop-in replacement, nginx allows a caching server to achieve 20 Gbps throughput compared to 4 Gbps using Varnish.

The RAID 50 array appears to be the current bottleneck. We will remove the RAID 50 array and use the disks individually in a just a bunch of disks (JBOD) configuration, as a faulty disk no longer causes a full caching server failure as it previously would with Varnish. As disk I/O should improve with a JBOD configuration we may need to investigate whether adding nginx thread pools will further improve performance.

Thanks to Mindaugas Rasiukevicius rmind@noxt.eu for his significant contribution to the performance optimisation we have been undertaking and for thoroughly reviewing this blog post.

Radix is just one of the projects we are working on in the BBC Digital Media Distribution team. If you like the idea of digging deep into an application and want to play an important part in the future of online media distribution, you can apply here.